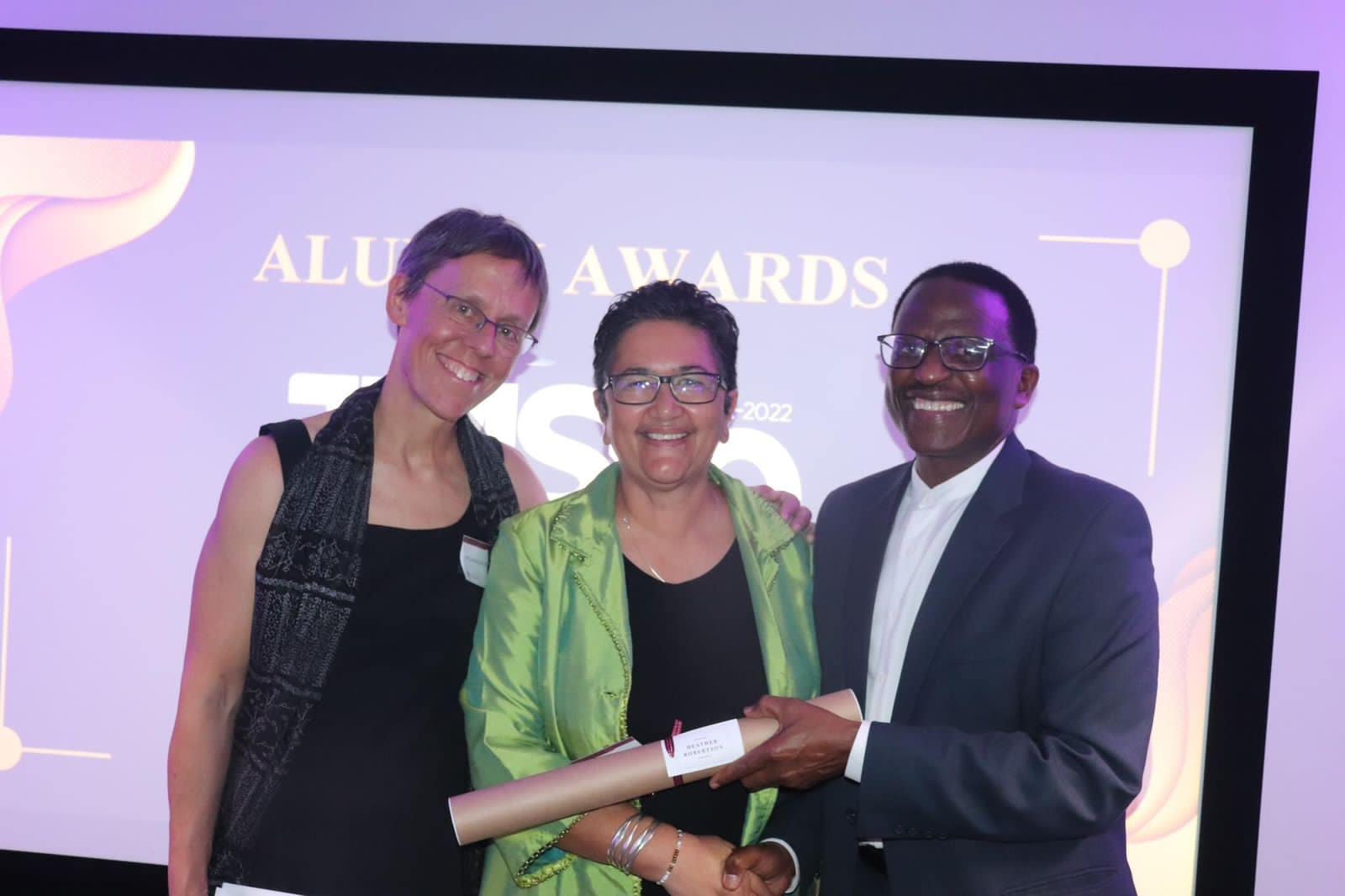 Daily Maverick 168 editor Heather Robertson (centre) receives her JSM50 award from Rhodes Vice-Chancellor Dr Sizwe Mabisela at a function in Johannesburg. To her left is acting head of the School of Journalism and Media Studies Dr Jeanne du Toit.

The Rhodes School of Journalism and Media Studies (JMS) wrapped up its 50th-anniversary celebrations and awards last week.

JMS awarded the final 24 of its 50 most illustrious graduates over three celebrations hosted at The Wanderers Club in Johannesburg. The three functions comprised a legacy luncheon and two dinners on Friday and Saturday nights. Other alumni were previously awarded during the Rhodes University April graduation in Cape Town and Durban, with overseas alumni awarded virtually.

Rhodes University Vice-Chancellor, Professor Sizwe Mabizela, said: “As we celebrate our alumni who have served the profession of journalism with great distinction, we must appreciate the role of free, independent and credible media in a democracy.” He hailed all 50 recognised alumni for flying the University flag high and for being ambassadors of Rhodes University wherever they go.

One of the awardees, SABC TV news reporter, Yolisa Njamela-Zikhali, said this is a special and incredible honour. “I am a child from the rural area in Xesi, and I grew up in Mdantsane, so to have gone to a prestigious university like Rhodes University in the first place was out of this world. When I finished my degree at the University of the Western Cape, I knew deep down that I wanted to be a storyteller because my grandmother loved stories. My mother made sure I went to Rhodes University – I do not know how she did it. I want to dedicate [my award]to my late mother, Nomonde Somnono. I thank my alma mater, and Dr Jeanne Du Toit, who trained and prepared us for the workplace. I am still telling stories in English and my home language because I met Dr Noxolo Grootboom, who told us to tell stories in our mother tongues,” she said.

SA FM’s Stephen Grootes said: “I fought with Dr Du Toit all the time when I was in Rhodes University, but no one did as much as she did for my career.” He said an important topic that needs to be tackled is managing journalism urgently and continually. “We need to talk about factual and honest journalism. The fear of going on air with a story, not knowing if your boss has your back, is utterly debilitating. We need to talk about factual, brave, and honest journalism. I say this at a time when an ex-President would take money from a vile and vicious racist to prosecute one of our own, Karyn Maughan. We need to support journalists in that position even if it means we put ourselves in danger. I think the only way we can win this fight is to rely on facts and apologise when we get it wrong. I thank Rhodes University for the honour.”

University of Johannesburg’s Department of Communication and Media Associate Professor Dr Admire Mare said his life was shaped by Rhodes University’s motto: Where leaders learn. “I didn’t know that a university’s motto can be critical in shaping somebody’s life and can actually speak to you. When I when to Rhodes University, I didn’t know I would actually be a leader at a university. I am out of words to thank JMS for their investment in my career,” he said. Dr Mare thanked his late father, the rest of his family, his primary school teacher and former Rhodes University academics who have become his colleagues.

Wits University’s Journalism Lecturer, Lizeka Mda, thanked JMS for seeing it fit to bestow her with the JMS 50th anniversary award. She said that at the time of her studies, one needed a permit to go and study at Rhodes University. “I thank the late Professor Gavin Stewart and the late Michael George Whisson for assisting me with getting a permit. I even lived with the Whissons for the first term. This award shows my family that all the work was not in vain. If it were not for Rhodes University’s School of Journalism, I would not be where I am today,” she said.

SABC TV’s Senior Manager Deidre Uren said Rhodes University’s School of Journalism and Media Studies taught her to use her passion to change a life every day. “I am grateful to Rhodes University for the honour and want to use the opportunity to encourage journalists to become part of the public broadcaster. So, I appeal to everybody, when you do your work, ask yourself if you have changed a life, and if you did, your job is done,” she said.

JMS Acting Head Dr Jeanne Du Toit said the alumni awards form part of a year-long programme hosted by JMS. She said the programme also included a series of colloquia in which journalists and journalism educators engaged in conversations about the future of journalism on the African continent. “As part of this programme, the School has commissioned a mural capturing significant moments in the history of South African journalism. The mural, the work of artists Mook Lion and Sanelisiwe Singhapi, is currently in progress and wraps around one side of the Africa Media Matrix building where the School is based. The School is planning a special celebration of the mural, due to take place in early February of 2023 when students return to campus for orientation week,” she explained.

Professor Mabizela thanked all the awardees for serving the nation with humanity. “Thank you for being the voice of the voiceless, the eyes and ears of our nation. You have not let your alma mater down. Continue to write those stories that inform and inspire us and make us imagine what it can be. Journalism is one of the most difficult professions; it requires courage, dedication, and resilience. You have been tenacious in the face of huge challenges. You have persevered to remain true to your trade, and for that, we are proud to be associated with each one of you,” he concluded.

Previous ArticleMakhanda Chess Club wins bronze in its maiden tournament
Next Article Crime is lower when cities are greener: evidence from South Africa supports the link