To merge or not to merge 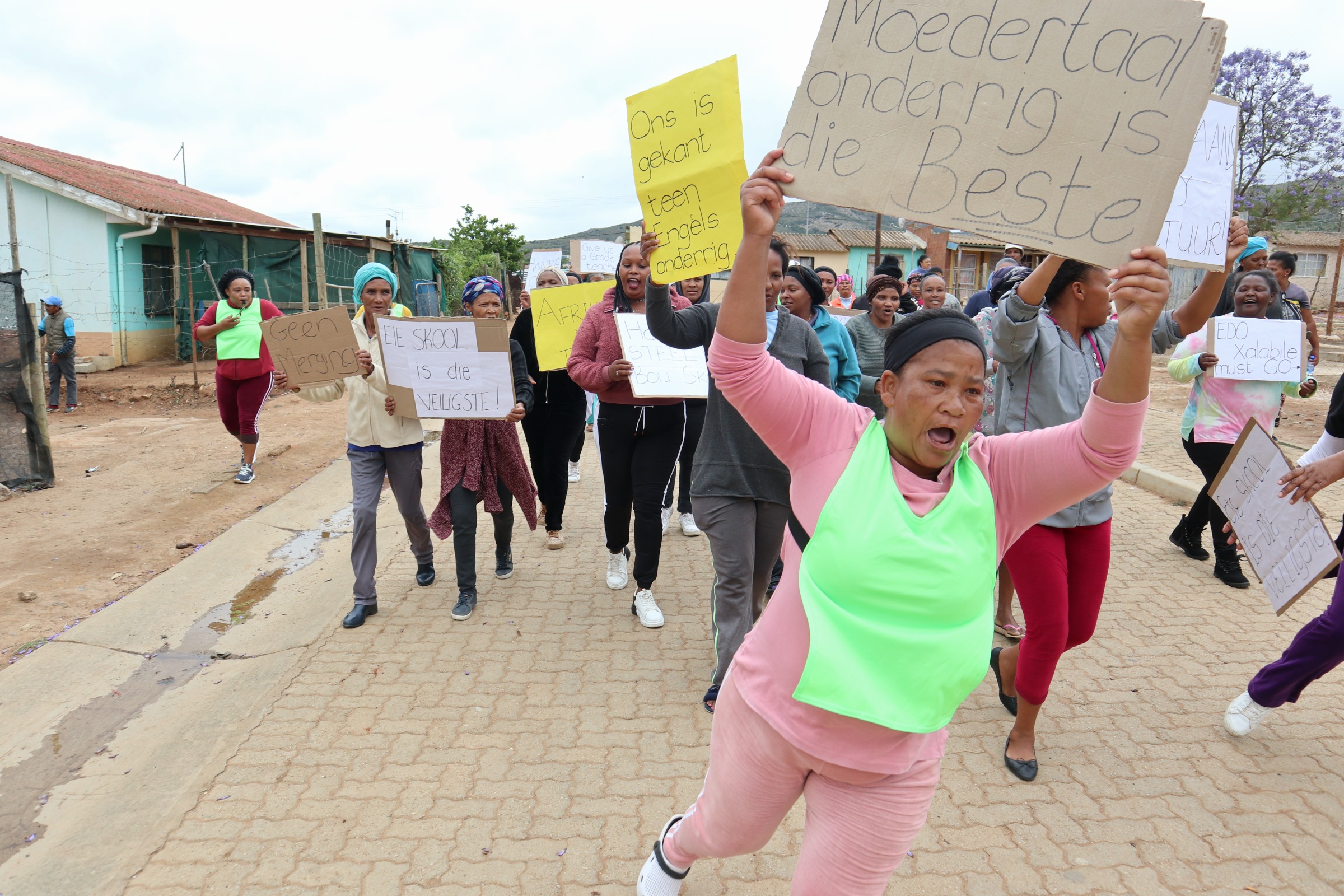 A march to Alicedale Town Hall ahead of the circuit manager's community meeting. Photo: Joy Hinyikiwile.

A battle over the proposed rationalisation of school resources in Alicedale surfaced language rights tensions in the town last week.

The Afrikaans-medium primary school, George Jacques, has 206 learners, seven teachers and a vacancy for one more teacher. The English-medium combined school, Hendrik Kanise, has 493 learners but only 160 in high school.

The march was to protest the proposed re-alignment of the two Alicedale schools to create government school ‘prototypes’ in the area.

The re-alignment was proposed by a Portfolio Committee, which visited the schools in January.

The proposal suggests that Hendrik Kanise Combined School be divided into two – a primary school and a secondary school. The Hendrik Kanise Primary section will be merged with George Jacques Primary School to increase learner enrolment and teacher allocation at the school and prevent learner dropouts and future closures due to low learner enrolment.

However, the snag is that George Jacques Primary School will have to change from being an Afrikaans-medium school to an English-medium school. In this way, the resulting primary school will become a feeder school for the local high school, which is also currently struggling with learner enrolment.

The school communities were given time to discuss the proposal and its viability and then share concerns.

A crowd of about 20 protestors gathered and demonstrated outside the school on Thursday morning, 10 November, expressing disapproval of the suggested school merger, re-alignment and removing Afrikaans as a medium of instruction. A march then proceeded to the town hall, with more protestors joining in. About 30 protestors arrived at the Alicedale Town Hall, demonstrated outside and then went inside for the meeting.

Remarks by the circuit manager

After community members had eventually settled in the town hall, Xalabile explained the Portfolio Committee’s proposal as follows:

Hendrik Kanise’s SGB chairperson explained that after various discussions with stakeholders, the Hendrik Kanise school community accepted the re-alignment. He, however, requested for more clarification on how the division would happen and argued that Alicedale needs to be treated as an exception regarding Post Provisioning Norms (PPN).

Represented by the school’s principal, because the chairperson could not attend, George Jacques’s SGB expressed the following remarks:

Response by a representative from the mayor’s office

Remarks in favour of the proposal

Remarks in favour of the proposal agreed with Xalabile’s comments and comments by the representative from the mayor’s office. Some explained that Xhosa pupils are already learning in a language that is not their mother tongue. Hence, they don’t see a problem with coloured pupils learning in English if there are limited funds and resources.

Remarks against the proposal

Remarks against the proposal ranged from complete disagreement with the re-alignment and merger to disagreement only with changing the language of instruction for George Jacques pupils. Other members expressed a desire for more clarity before considering the proposal. Additional remarks included:

In concluding the meeting, Xalabile encouraged the Alicedale community to contemplate the matter and not demonise the re-alignment. Instead, community members must suggest ways to make the re-alignment work for everyone. Concerns regarding pupils who are already used to studying in Afrikaans can be considered. The language change can be enforced on pupils as they start Grade R.