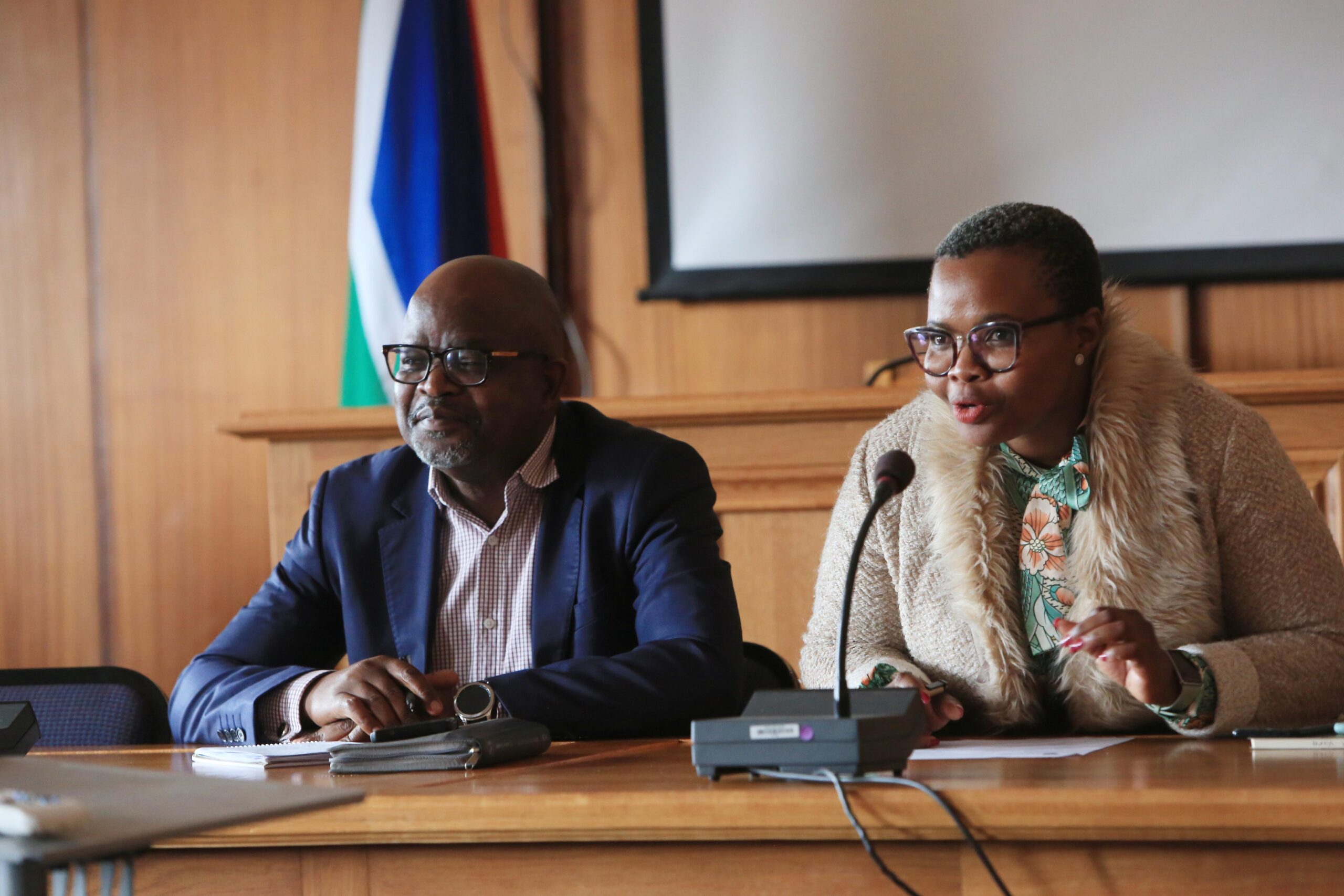 Just 24 hours into his tenure as Moppo Mene’s replacement as Makana Municipal Manager, Phumelelo Maxwell Kate spoke to ROD AMNER and OVAYO MILISA NOVUKELA on Grocott’s Mail’s ‘Makana Matters’ on RMR last Thursday. Kate, who schooled in Makhanda and served as its Executive Mayor from 2006-2009, committed himself to “working with all the stakeholders of Makana to find solutions and return the district to its former glory”. Here are some highlights from the interview.

Question: What state was Makana in during your mayorship from 2006-2009 compared to now?

“We did have the ‘normal’ problems related to service delivery, but they were manageable. And the municipality was in good financial health, enabling us to provide services. It was in a better position than it is now.”

“Makhanda is a very old town. It has the oldest water reticulation system in the country. And some of the challenges are related to population growth in the city. In 2009, some of the townships like Vukani, Hlalani, Extension, 7, 8, 9 and 10 were in their infancy. And could be new settlements that I am not even aware of yet. This is putting strain on the municipality’s available resources. Infrastructurally, the MM has not grown to match the expansion of the town.

“I don’t think it would be fair to make a direct comparison between that time and now.”

Question: Why would you come back to such a distressed municipality? Would you advise other people to move here, retire here, or invest here? People are throwing up their hands and leaving the city. There is a lack of business confidence; there’s a sense that these infrastructure challenges are overwhelming us, and there may not be a future here for the likes of a university with an extensive residential system. Would you advise anyone to come and live here?

“My last job was at the Koukamma, one of the seven municipalities in the Sarah Baartman District and in the Tsitsikamma and Langkloof areas on the border with the Western Cape.

“Koukamma is a microcosm of Makana – its challenges are almost the same but on a smaller scale. Both municipalities have high unemployment, lack of investment and commercial industry, and low revenue collections and cash flow problems. But, you can more easily manage those contradictions and service delivery problems in a smaller place.

“Makana is on a bigger scale. Our roads – in all areas of the town – need rehabilitation and repair. Here, all areas are affected by water outages. The problems are magnified. This requires a robust and decisive approach.

“Why would one think about adding value to a municipality such as Makana as it is today? Indeed, people asked me the question: ‘Why would you go to Makana?’ They gave me a whole list of challenges facing the municipality.

“But I am not a pessimist in my approach and attitude to life. I always adopt an optimistic approach. I look for a path beyond what is put in front of me.

“If you were to tell me that natural disasters cause all the challenges Makana is experiencing, then I could understand you. Then our remedies would require some supernatural intervention.

“But I believe that this is not the case. Of course, the prolonged drought has caused water challenges and limitations. At some point, we may require that divine intervention to hear our cries and prayers.

“But in all other issues, I believe it will take a human effort to push back those problems and find solutions.

“We need to take back the Makana to its former glory. Makana was not always like this. We need to find out what went wrong here. And we must fix it without reinventing the wheel. There were so many interventions, research and studies done here to bring a programme to alter the situation.

“If those plans – like the Financial Recovery Plan – exist, we must implement them. If they are not, we need to make them.

“If Makana was not always like this, it could be transformed into what the people want it to be.

“But it will require the support of everyone – all the stakeholders in civil society should rally behind the efforts the municipality is putting in place to change the situation.

“I will encourage all Makhandans to stay. The situation may not be attractive in the eyes of a potential investor or homeowner or anyone who would like to bring up their children here. We’ve got intermittent water, electricity, and other issues related to creditors that need to be dealt with.

“But I believe that if we’ve got a plan, we can put our ducks in a row and, together with the stakeholders, try to enter into a social compact.

“We can see things through the same lenses without necessarily agreeing about everything. If we know the route, we can get there. We might fight along the way around strategies and tactics, which is natural. Those contradictions are sometimes necessary. We all want to guard our vision of the final product.

“I still advocate that Makana is a great place to be.”

Question: There are some elephants in the room. There was a horrific assassination [of a municipal manager, Jeff Budaza]earlier this year – a very well-liked and respected man who blew the whistle on corruption. You talked about acts of God, and, yes, we’ve had a terrible crippling drought for seven years, affecting the supply on the western side. But on the eastern side, we had a full dam for all of this time. Would you accept that we have deep problems lurking under the surface, some of them quite pernicious, like ghost workers, overtime fraud, and tender fraud? Would you agree that the local state has been captured and that this needs to be confronted head-on And what is your attitude towards taking decisive action about that?

“I haven’t entered the municipality yet. My assessment of the situation is not as authoritative as it should be yet. I need to delve into these issues.

“Makana is not unique and is not immune from other municipalities’ issues – for example, the failure to collect enough revenue.

“The formula used to allocate the resources from the state government to local municipalities is based on a formula that assumes that the city should be collecting 90% of their revenue. This is unrealistic and is under review. As I enter the institution, I will want to understand the overtime issue and other problems.

“I will meet with top management and the general workforce to allow them to express their frustrations, to say what they would like to see happening, and their commitment to achieving those things.”

Question: But we don’t have a proper staff headcount or an accurate organogram. Some difficult decisions might have to be made. Many workers are reported to come to work who can’t work because they don’t have supervision or they don’t have the tools and materials to do the jobs they are paid to do. It seems like we trapped all our money in wage bills; we don’t have the resources to allow our workers to put their shoulders on those wheels. Do you think that you have the resolve to be able to make some of those decisions?

“I think it will be a waste of time to come to Makana and then not take decisive action because I intend to turn around the municipality. This means that the decisions we need to make might need to be brutal and decisive.

“One needs to make decisions at the right time. Before making a decision, work must be done to inform that decision.

“This is what is missing now. Before I answer your questions, I have information gaps that I need to fill as a matter of urgency.

“But I can say that I am a person who is not afraid to take decisions. We need to find a way to turn the situation around by taking firm and brutal decisions.

“Regarding head counts and organograms, you might be saying that Makana has a payroll that cannot be justified. Those are some of the issues that we’ll have to start to deal with as a matter of urgency. But you need a process to collect correct and accurate information that will inform your decision-making processes.

“If you were interviewing me three months hence, I would have given you more flesh than I am today.

Question: What message do you have to the citizens of Makhanda? What is your promise, and what will you do as the new MM?

“I don’t believe that the Council has made a mistake by appointing someone like myself to come and find solutions. I am committing myself to work with all the stakeholders of Makana to find those solutions and return the district to its former glory. Some of the answers are sitting with us, be it the municipal officials, our political principals, the councillors, and the members of our communities; all of us are carrying answers to some of the problems.”

A short biography of Pumelelo Kate

Phumelelo Kate attended Andrew Moyake Primary School and Nyaluza High School in Makhanda before moving to the Western Cape, where he was involved in a development NGO. He started his first year at Khanya College in the Western Cape, moved to the University of the Western Cape and graduated with a teaching degree in 1993.

He taught at Benjamin Mahlasela Senior Secondary School – which has since closed – but did not stay long. He became active in the labour movement and the ANC, which was implementing the new local government transformation programme.

He served in the Cacadu District Municipality (now Sarah Baartman) between 2000 and 2006 when he was redeployed to serve as Executive Mayor in Makana Municipality.

During his tenure as mayor, Kate famously said Grahamstown’s name would change to Makhanda “whether it costs the Makana municipality two cents or R100 million to change it”.

“You cannot equate the transformation of our country to costs. Change must happen, and nothing is going to stop it,” Kate was reported as saying in Grocott’s Mail in 2007.

He remained mayor until 2009 when he returned to the District Council and joined the Sarah Baartman administration from 2011 to 2016.