New Rhodes Oppidan Council has a message for everyone 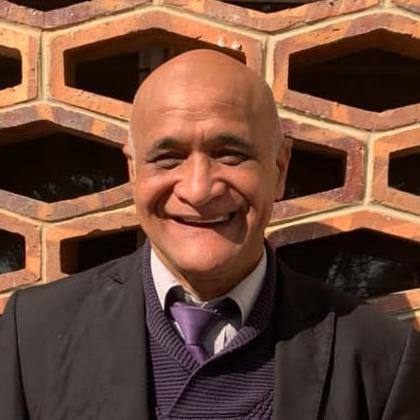 With Rhodes University finally concluding its controversy-ridden SRC elections, we decided to meet with the incoming Oppidan Councillor, Adrian February, to see if he has any messages for the Makhanda community regarding student relations. As it so happens, February, a third-year Bachelor of Social Sciences student, stands apart from his fellow students and SRC members in many ways.

At 60 years old, February is visibly older than most of his student peers. He is a father, grandfather and divorcee. But, he is not letting any of that get in the way of his first university experience. “I always tell students that once I cross this road, I’m a student,” he said. “Don’t see me as your senior. I’m your peer. Address me accordingly. I won’t feel disrespected if we have a debate and you scream at me because I’m a student like you.”

The 60-year-old has a ton of work and activism experience and believes this can help him make a difference in both Rhodes University and the Makhanda community.

“I’ve always been involved in political activism,” he noted. “I’ve been an activist all my life, including during the struggle against apartheid. I’m the kind of person who can’t live with inequality and poverty. I’ve always been in the movements.”

The in-coming councillor was more than willing to speak to Grocott’s Mail about his plan for the Oppidan office. Here are a few messages we took away from the conversation:

To the Rhodes Oppidan community

Originally from Cape Town, February said he had stayed off-campus from when he began his studies at Rhodes University in 2020. He currently shares a house with his youngest daughter, who also began studying at Rhodes in 2020. The councillor believes being an off-campus student makes him aware of the struggles faced by his peers. He says he also continually engages with Oppidan students and promises to improve the Oppidan student experience in the following way:

February plans to meet with Oppidan students to discuss their concerns. The meeting should have been held on 25 September, but could not proceed because the council handover had not been effected.

To the Makhanda Community

February said he plans to meet with rental stakeholders to discuss a ceiling on rent for students. He feels rent is too expensive. “NSFAS students are left with like R800 after spending so much money on rent,” he said. Being an NSFAS student himself, he knows the struggle students face in covering their expenses.

The councillor also had a stern warning to landlords and rental agents who exploit students.

“I want to blacklist landlords who keep students’ deposits unnecessarily,” he said. He specifically mentioned one big rental company in the city and promised to keep an eye on it. “Students have complained that the rental company refuses to return their rental deposits,” he noted.

On a positive note, the councillor said he also planned to mobilise students to get involved in the community beyond their involvement through the Community Engagement office. He has been involved in various community outreach projects since arriving in Makhanda, including running the Makhanda Helping Hands Soup Kitchen. “I stayed in the township [Joza extension 10] for about 18 months when I arrived here. So, I’m familiar with the township,” he said. In the last local government elections, February even ran to be a councillor for Ward 1.

About the Rhodes community

“We have students who often suffer because they don’t have food or electricity. When we call upon students on UCKAR for a R2 donation, they are not prepared to help others, but they can spend hundreds of rands in clubs,” he said.

“There’s no unity here at Rhodes,” he repeated. “Students are not having fun because they don’t have unity.”

February said he had noticed an element of classism in the university. “There are students who don’t want to associate with certain students because they are in a different social class from them,” he explained.

Another element he noticed was a class division between Oppidan and Res students, which he hopes to address during his tenure as Oppidan Councillor.

“There’s a wall between res and Oppidan students here, and in 2023, we will break down the wall,” he promised. “When there’s a function, it’s not gonna be an Oppidan function, but a function for Rhodes students.”

To those who say he is too old to be in student council and should step down (and they are there), February said: “I don’t have to defend myself when people say I’m too old because the people on UCKAR defend me. I serve in truth. I serve the community. I help students who are in need. I believe I’m a student leader. It’s my right to be serving on the council. I should not be discriminated against. If I believed someone could do better than me, I would gladly step down for a younger person. But how could I step down if I am unsure if the new person will deliver? We’re crying as Oppidan students. I believe I’m someone who can make a difference.”

Beyond his studies, February plans to settle in Makhanda and give back to the community instead of returning to Cape Town. “At my age, I’m not pushing a career anymore,” he said. “I’m more interested in having a qualification and being a student leader.” He hopes to start a tutoring programme to help high school learners with their studies and help them apply to universities.

February lamented the lack of career guidance for South African youth, even in university. Although February initially completed his matric in 1980, he re-wrote the matric paper in 2019. He changed his language of instruction from Afrikaans to English, hoping to open himself to a wide range of academic opportunities.

However, he has since noticed various barriers standing in the way of South African students; some are not communicated. The uncommunicated barriers include information on requirements to study beyond the undergraduate qualification.