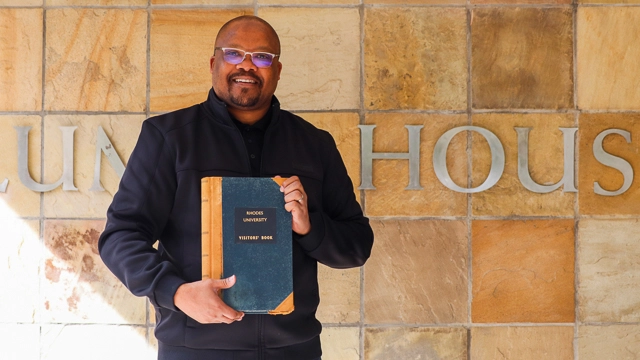 Rhodes University Director of Communication and Advancement, Luzuko Jacobs, with the Visitors' Book outside the Alumni House building. Photo: supplied

Situated for years in full view in the Alumni House foyer, a historical Visitors’ Book has been available for students, parents, alumni, and visitors to comment in and leave their details. Sadly, due to the Protection of Personal Information Act (POPI), this book will no longer be able to be used for its intended purpose.

The book seems to have come into existence during a Gqeberha (then Port Elizabeth) reunion on 8 April 1963, as the first tranche of entries listed their addresses as PE, Walmer, or Uitenhage. The columns in the book include the current date, name, physical address, phone number and date of departure from Rhodes University.

To put this time frame into perspective, the student newspaper (called Rhodeo at the time) ran an edition on the same day, and some of the article’s highlights included:

The book was initially used for special occasions, such as reunions, orientations and National Arts Festival, and only factual details were requested.

It was only during Rhodes University’s centenary in 2004 that a comment section was added – as well as an “email address” column. The Centenary portion of the book constitutes the most entries, with 370 entries over a five-day period (1-5 July, 2004).

There were many comments about nostalgia, and several comments stated they were “still here” as alumni who never left the University.

Some funny comments included “With a hangover – nothing has changed!” and one entry simply read “42”.

Some of the furthest places the Book’s entrants came from at the time of their visit to the University include South Korea, New Zealand, the USA, and England.

Finally, the last entry in the book was written on 20 September 2019 by an alumna who studied at Rhodes University in the late 1970s.

“The quaint and charming Visitors’ Book has served the Rhodes University community network well over the years and provides an interesting glance of the history and transformation of the University since 1963,” said Luzuko Jacobs, Director for Communication and Advancement.

The university had now replaced it with modern forms of contact sharing and engagement such as the flagship https://rualumniconnect.ru.ac.za/ platform, he said.

In its retirement, the Book will be kept securely and appropriately archived by the Division.