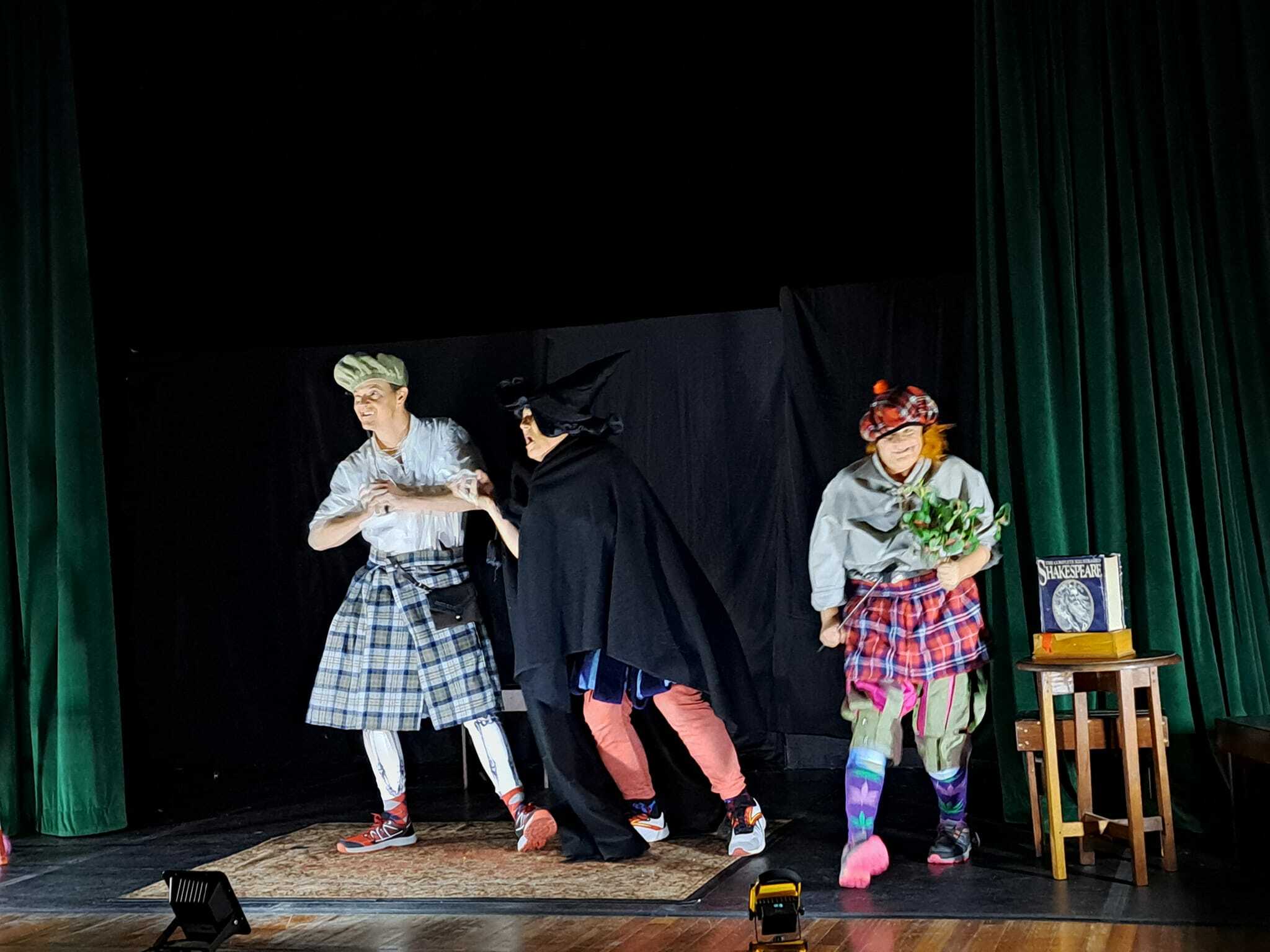 A scene from 'The Complete Works of William Shakespeare, Abridged: A New Variant' captured by an appreciative audience member. Photo: Jeannie Wallace McKeown

If you love Shakespeare, you’ll love this show!

If you hate Shakespeare, you’ll love this show!

There really isn’t any other option. An exceptional trio of actors – Nita Allsopp, Gareth Pretorius and Bomber Webb – delivered a money-back-guaranteed full blast of pure laughter and snappy wordplay.

Describing the trio as funny, entertaining or even flat-out hilarious would be scratching the surface of how phenomenal and well-executed the show was.

The title is about as self-explanatory as it gets. All 37 of the Bard’s comedies, histories and tragedies are irreverently tick-boxed.

Thanks to Eskom, the Festival audience was appropriately transported back in time. In Elizabethan-era theatre, there was no electrical lighting, no mics, or digital sound effects. Our trio had nowhere to hide, having to rely on nothing but their talents. And, oh my, how they delivered.

There were no long monologues in an English lost to our time. Instead, they threw at us every funny stereotype about Shakespeare’s plays, calling out the famous writer from the grave for the nonsensical scenes that sometimes unfold in his plays, twisting the stories to let their unique personalities shine through.

So enthralled were we by their vibrant, entrancing performance that we barely noticed when power returned.

The trio commanded an array of over-the-top costumes and props to transport us to a crazy patchwork of centuries and places. Linda Ormond and Jacqui Arnot facilitated the speedy costume changes and swapping of props. A ladder was used as a balcony for Romeo and Juliet, and in one of the funniest-ever uses of a glass of water, we all dissolved in fits of laughter as Nita Allsopp, playing Ophelia in Hamlet, drowned herself by splashing it on her face.

The audience was made to feel part of this interactive, high-speed roller-coaster. In Hamlet, a lucky audience member sat on stage and screamed while the rest of us transferred into Ophelia’s id and superego. The hall was filled with shouting and Harry Potter hand gestures.

The trio make sure to add a few juicy comments about some of our most recent jaw-dropping sagas; Will and Jada, Harry and Meghan, Depp v Heard. And they took the time to throw a few jabs at Cue. They hilariously made references to the digital newspaper, using “Look, it’s a Cue reviewer!” as a distraction. There was never a dull moment.

The entire crew of The Complete Works of William Shakespeare Abridged: A New Variant put on a show for the ages. Shakespeare would be envious.