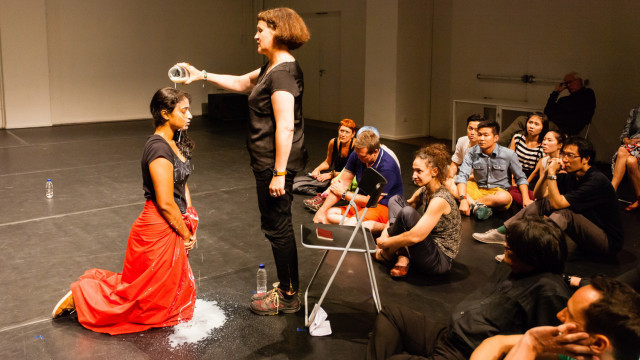 Passports hold power. Certain citizens can access any country with little to no hindrance. On the flip side, travelling is severely restricted for many others as their country’s passports hold little border power. Entering another country with a ‘weak’ passport often arouses suspicion and feels degrading.

Visa applications can be tricky. The piles and piles of documents, the interrogating interview, and the long waiting period for approval. And still, none of these fully guarantee you will even get that visa! All because your citizenship in one country has no value in the eyes of another.

Passport Blessing Ceremony performed by Venuri Perera is a commentary on this process.

Perera is a choreographer, performance artist, curator and educator from Colombo, Sri Lanka. According to the Guide Passport Ranking Index, the Sri Lankan passport is ranked 104. Performing this ceremony with people with more powerful passports channels that energy into Perera’s passport. A man from Switzerland holds the most powerful passport in the audience. Being vulnerable in front of strangers, Perera invites him to ask her visa interview questions while she gives honest answers.

The ceremony is entrancing. Perera’s movements are delicate and precise; she fully gives herself to the ritual. She breaks a bowl in the middle of Church Square, and market-goers are drawn to her actions. Many, having missed Perera’s explanation of the ceremony, are left to piece together a story. Yet it is clear from her eyes that this moment is sacred and not to be disrespected. She removes her underwear and places it in a milk jar, eyes popping out from the crowd in pure disbelief. The Swiss man tilts the jar above Perera’s head; milk drips through her hair, streaming down her face. Some call it witchcraft, others call it art, and her actions make no apparent sense to us. But we know each step is important, carrying the weight of a world in which some are considered more important than others.

By the end, the ground is bathed in milk, covered in shattered ceramic pieces, and the wind gods come to collect the remains of the Passport Blessing Ceremony. Next time you want to apply for a visa and are overwhelmed, consider having your passport blessed.

Previous ArticleYes, it changed us
Next Article Shakespeare has been outdone