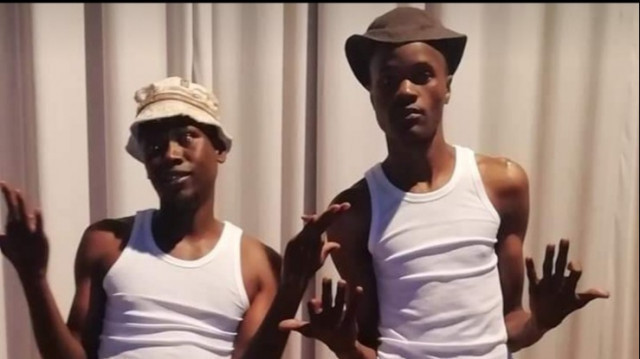 Like far, far too many young people in South Africa, Thabo Pusho, our protagonist in The Grave, never knew his father. His mother raises him in the chaotic, messy, clamorous township where distractions and temptations lurk on every corner.

Yet his mother, desperately trying to give her son a chance at a better life, gets him into a former Model C school. But it takes more than exposure to a suburban environment to tame Thabo’s demons, which emerge from the black hole of not knowing his father. This is a hole his mother cannot fill.

With acting that engages our sympathies, the cast of nine in this Fringe show takes us through the emotional wringer as we root for Thabo, fearful all the while that he will make the wrong choices.

After a fight with his mother, Thabo gets involved with some rotten apples who introduce him to drugs and a string of crimes. “You will dig your own grave one day”, Thabo’s mom’s voice echoes in his head as he experiences life in a soul-destroying prison.

We are introduced to six other prisoners whose characters unfold brilliantly. Actors Khuselo Mdhluli, Bush Mmekwa, Mabebe Legalammitlwa and Zenzo Nkaki portray believable characters that illustrate the treatment prisoners receive from authorities and other prisoners.

Their multifaceted personalities and the choices they’ve faced in their lives – choices no one should have to make – are revealed to round them out as human beings whose motives and decisions we can understand, if not approve of.

The intense dialogue, clever moments of comic relief, and harmonising vocals from the talented performers keep us absorbed in their world throughout. The Grave received a standing ovation at the PJ Olivier Theatre this week.

Previous ArticleFestival Of Circles: a festival within a festival
Next Article Nothing happens, nobody comes, nobody goes