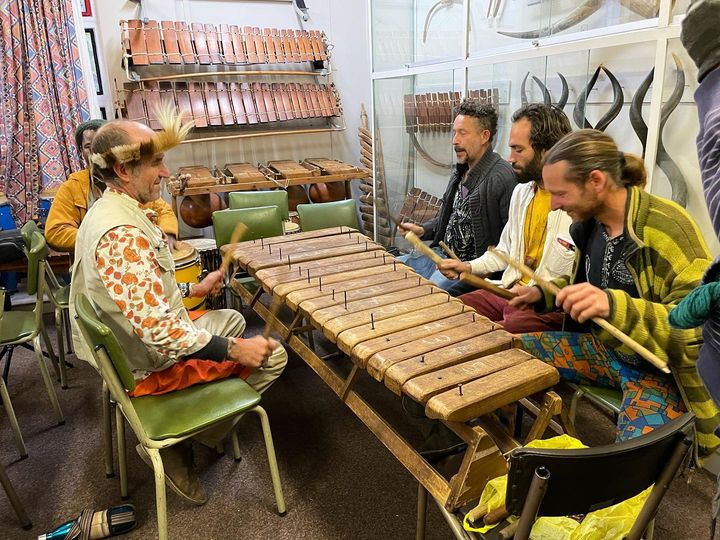 The Festival of Circles crew learning how to play the Akandida - an instrument designed for collaborative music playing at the International Library of African Music. Photo: FoC Facebook page

“You don’t know where you’re going if you don’t know where you come from. African values are held in their art forms,” says Geoffrey Tracey, the grandson of famed ethnomusicologist Hugh Tracey. Away but not detached from the National Arts Festival, the Festival of Circles brings together spirit, African music and culture to encourage people to reconnect with their roots.

Often relegated to the past or seen as something to be ashamed of, Geoffrey Tracey believes these indigenous practices deserve to be celebrated.  In a tranquil and shaded garden on Fitzroy Street, he holds a creative space for people to learn and be heard through events focused on traditional healing practices, dances, and art forms.

Tracey believes in creating a circular, rather than a hierarchical, form of communication and knowledge-making. This decentralised approach to education has been an integral part of Tracey’s philosophy and the work he has done through the Saronde Indigenous Knowledge Centre. The festival aims to bring more exposure to this initiative, which will enable people to learn how to make and play African instruments.

The Festival of Circles has presented an eclectic offering during NAF, including a tour of ILAM and a talk on African Tuning Systems; a lecture on musical forms and structure with a focus on the Chopi Timbila Xylophone; and a regenerative living workshop.

Geoffrey Tracey’s passion for African music has a long lineage. In the 1920s, his grandfather, the late Hugh Tracey, travelled Africa recording indigenous songs, sounds and rhythms, learning about various African instruments and collecting them. After receiving a grant, the International Library of Music (ILAM) was established in 1954 by his son, Andrew Tracey, bringing exposure to Hugh Tracey’s curations. The library was founded to encourage appreciation for African Music, its culture and its stylistic form. ILAM later became a part of Rhodes University and now teaches African music and ethnomusicology.

Geoffrey hopes to continue the work of his grandfather and father by drawing attention to the creative space he is establishing right in his backyard in Makhanda. A space for people to appreciate and learn about indigenous African culture and arts.