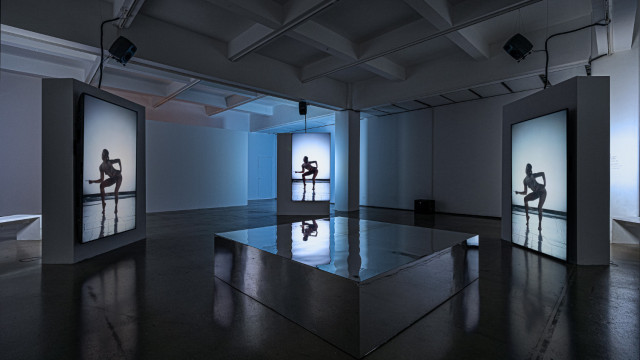 The gallery space is filled with the body in motion. It’s an interesting scene – a series of screens surrounding a silvered plinth. Light flickers off the walls, and figures posture and perform through the glass. For Eisa Jocson, who usually features in dance programmes, it is a unique opportunity to showcase her work in the form of an installation.

Corponomy comes to the Monument Gallery as a neatly curated installation, and the videos on exhibition do well to contextualise her engagement with dance as research, training, and meaning-making. The artist herself has yet to arrive in Makhanda when a small crowd of viewers show up for the exhibition walkabout over the weekend, but the National Arts Festival’s Artistic Director Rucera Seethal is there to introduce the show and field questions.

“There’s a lot of tension in these works,” says Seethal. “A slow build-up of movement in the body.” Growing up in the Philippines, Jocson’s formal training is in the visual arts, while her background is in ballet. Her resultant use of dance can be understood as a performative visual practice used to make sense of the body and its intersections with labour, capital, and gender. Much of it is also central to the socio-economic realities of the Philippines.

The works in Corponomy are slow, mesmeric, and instructional. A mixture of text, sound and movement, they’re designed to be viewed and engaged with at length. The videos – many of them multiple performances and scenes held on screen at once – trace her performance of, and research into pole dancing, hostesses, and macho dancing – a Phillipino phenomenon that Jocson has described as “a dance that flaunts its ‘manliness’ using a somatic idiom for turning an audience on for money.”

In ‘Macho Dancer’, a 2013 body of work, the artist breaks down and embodies the form and condition of the male dancer. Equal parts performative, diagrammatic and theatrical, Jocson emulates the physical language and the ideologies of the art form, performing alongside textbook illustrations of Macho dancing, re-reading the art form through a feminist lens.

Here, the tension and the slow, emergent movement that Seethal speaks of is clear. But Jocson is also building up a particular character through movement, undergoing a physical and social change, providing a new entry point into the systems of labour and commerce necessitated by what she refers to as the “the voyeurism industry”.

Other works put forward a choreography of domestic duty, a shrewd critique of the performance and entertainment industries and their exploitative labour practices (specifically regarding migrant labour) and skewed value systems. Anger and anxiety course through many of the works, albeit quietly, as does the burden of representation, all held in slow and deliberate performance.

Jocson surfaces the complexities of gender, mobility, labour and identity and brings them into the public realm. It is performance as process, and vice versa, dance as vital research and speculation.