Chess is back in Makhanda 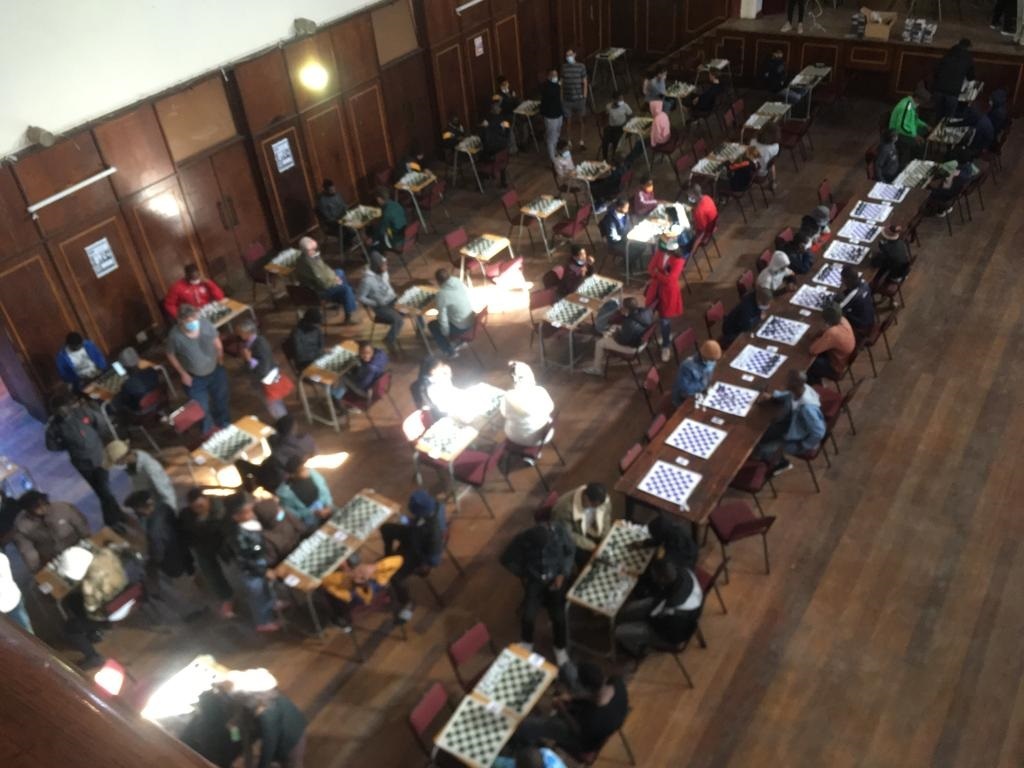 An aerial view of the chess tournament.

On Saturday, April 30, Makhanda hosted one of its largest-ever assemblages of chess players. More than 200 players from Makhanda, East London, Port Alfred, Alice, Mthatha, Jeffrey’s Bay, Butterworth, and other surrounding areas converged for a rapid tournament in which players had about 25 minutes per side.

The tournament prizes were sponsored by Kelotlhoko Property Services, with Chris Oosthuizen of Redwood Spur donating burgers and chips to the development section players and officials.

In the A section consisting of 44 players, we had four players – Tshediso Mpya, Kulusande Mafanya, Dumisa Nkosi, and Tyler Nevin – with ratings above 1800 (which would place them in the top 250 in the country). Nevin played well to beat Mpya to finish first on a tiebreak from Nkosi, who beat Mafanya. Both players finished on five points, Mafanya finished third on four points, ahead of Lindokuhle Somco on tiebreak, and others. Megan Dove, from Buffalo City, won the prize for the best woman in this section.

The B section was to be contested by over 130 players at 15 minutes per side. Unfortunately, a glitch in the software program that does the pairings to match players with opponents on the same score and ensure that no player faces the same opponent twice failed us. Every attempt made by the three qualified arbiters to rectify this was unsuccessful. This section of the tournament had to be adjourned to be followed by an online tournament later this month.

Jeremiah Sewelo (or Coach Jerry, as he is known to his players), the event’s chief organiser, apologised on behalf of the organisers. Players who travelled from far were obviously disappointed. Lessons were learned, and we hope to rectify all the problems faced in future events.

The development section, mainly for chess beginners, saw junior players, mostly from primary schools, competing against each other. The kids had so much fun and learned a lot on the day. Good Shepherd, Nombulelo, Ntsika, Nyaluza, CM Vellem, Makukhanye, and Ngangelizwe (Mthatha) were some of the schools represented on the day. Tebogo Nomnqa emerged victorious, with Errin Lufu coming second, followed in third by Cindy Fourie.

“There are so many good chess players in this province,” Coach Jerry said. “Our central vision as Sewelo Chess Academy is to see our players playing chess regularly. We aim to establish a chess league, which can only be possible if all chess stakeholders work together.

“Everyone needs to come on board, from the chess clubs, associations, local municipalities and government departments, businesses, schools, and our communities. From this tournament, it became evident that the players and coaches were available, willing, and ready. Now, it is up to us as organisers, administrators, and sponsors to create a platform for them. Let us bring chess back home.”

This tournament would not have been possible without the efforts of Jeremiah Sewelo and his wife Nolwakhe Sewelo, the chief arbiter, Petrus Stuurman, fellow arbiters Freddy Odendaal, Gavin Persent and Musa Jikijela, with the assistance of selfless volunteers such as Thasky Fatyi, and teachers, coaches and parents who brought players to the venue.

The Department of Education assisted by providing more than 80 desks to be used on the day, and Radio Grahamstown also played a pivotal role in announcing and advertising this event for two weeks before it took place. Thank you once more to Sonny Kgatitsoe of Kelotlhoko Property Services for sponsoring the payment of prizes, venue, and other essential logistics. Chess is back in Makhanda.