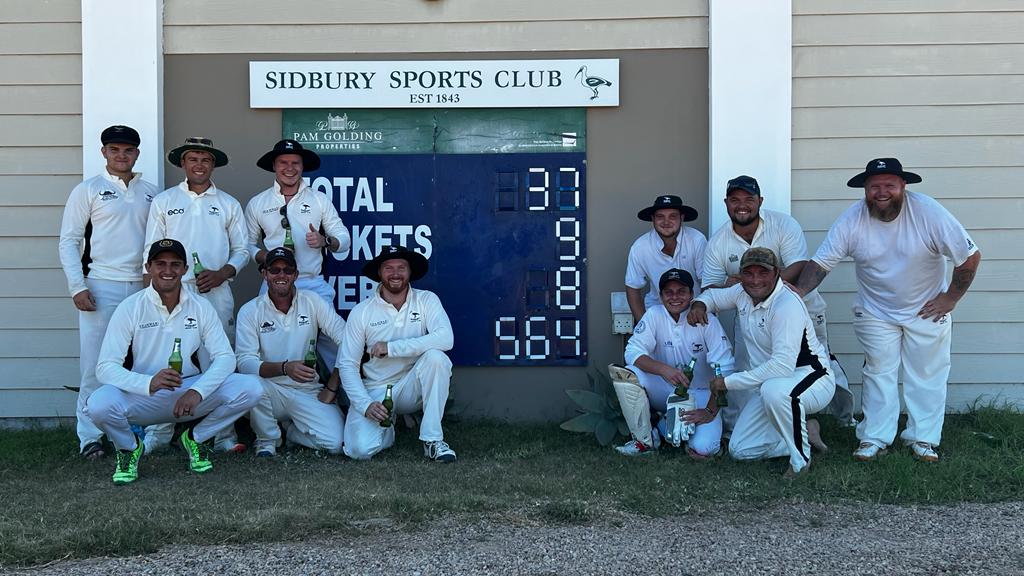 Sidbury are the new Grahamstown Cricket Board (GCB) 2nd League Champions for the 2021/2022 season. Photo: supplied

They are deserved winners and champs after claiming the title they took many years ago. It has been a while for the team to win the prestigious 2nd league and what makes it extra special was the fact that they beat all odds to come from behind and claim the title.

Sidbury had a slow start and found themselves at the bottom half of the log for much of the season. Station Hill, who were dominant log leaders at the beginning of the season, were disappointing in the last three matches that counted the most.

In January, Sidbury gained momentum in the second half of the season and completed a phenomenal comeback. They almost registered maximum bonus points – which were crucial in every match in the second half – and closed in on log leaders Station Hill and Port Alfred in second place.

Sidbury gained tremendous confidence as a team and played for each other, taking it game by game. It was, however, a very close race. With three games remaining, the honours could have been anyone’s – Station Hill, Port Alfred, Manleys, Salem and Sidbury were all in the running. Bonus point wins became crucial, and they were the deciding factor towards the end.

It took Sidbury until the last game of the season to win it, and only a win in their last fixture against Shrews was required for them to be crowned the ultimate winner. They did just that in a fantastic fashion. Station Hill, who were almost certain of winning the league with three games remaining, were left very disappointed.

Sidbury went into the last fixture of the season with only one thing on their minds – to win the match and, with it, the championship.

Sidbury was the venue for this much-anticipated clash and was probably the game of the weekend. Shrews won the toss, batted first, and were bowled out for 142 in just 27.2 overs by highly psyched-up Sidbury bowlers, led by season campaigner Juandre Nel. They bowled with extreme aggression and control.

Ronnie Roth was the destroyer-in-chief for the winning side, claiming a magnificent 5/28 in 8 overs, including a hat trick. Juandre Nel 1/21 (6) and Jason Maclahlan 1/31 (6) again proved their consistency with the ball and impressed.

Sidbury’s batsmen knew the equation and aimed for that all-important bonus-point win. The new Craynicolls bat of Jade Bowles again came in handy and gave him that extra confidence that saw him scoring a match-winning undefeated 52*.

He was very calm under the circumstances and played one of his best knocks for his side. The evergreen Jason Maclahlan (37) and Juandre Nel (18) once again contributed with the bat and made sure their presence was felt. The students were stunned by Sidbury’s performance and could only watch them reaching the target of 146/4 in just 18.4 overs. Sidbury claimed a well-deserved 6-wicket bonus point win and walked away with the prestigious 2nd League Title.

After winning the league under challenging circumstances, Captain Bruce Main was a delighted man. “I am extremely happy and proud to be captain of this unbelievable bunch of players. What makes the title even more remarkable is that we came back very strong after a slow start to the season. We virtually had to play catch up for most of the season, but the boys showed tremendous character and we registered impressive bonus points wins along the way.

“The bonus points win were very crucial, and it came in handy when we needed it the most, especially with Station Hill leading the pack for most of the season. They never disappoint when it matters, and that alone gave me confidence as a captain and leader. There was an unbelievable spirit in the camp, and everyone pulled their weight. I am over the moon and can’t explain the feeling.”