Should we feed strays or let them suffer? 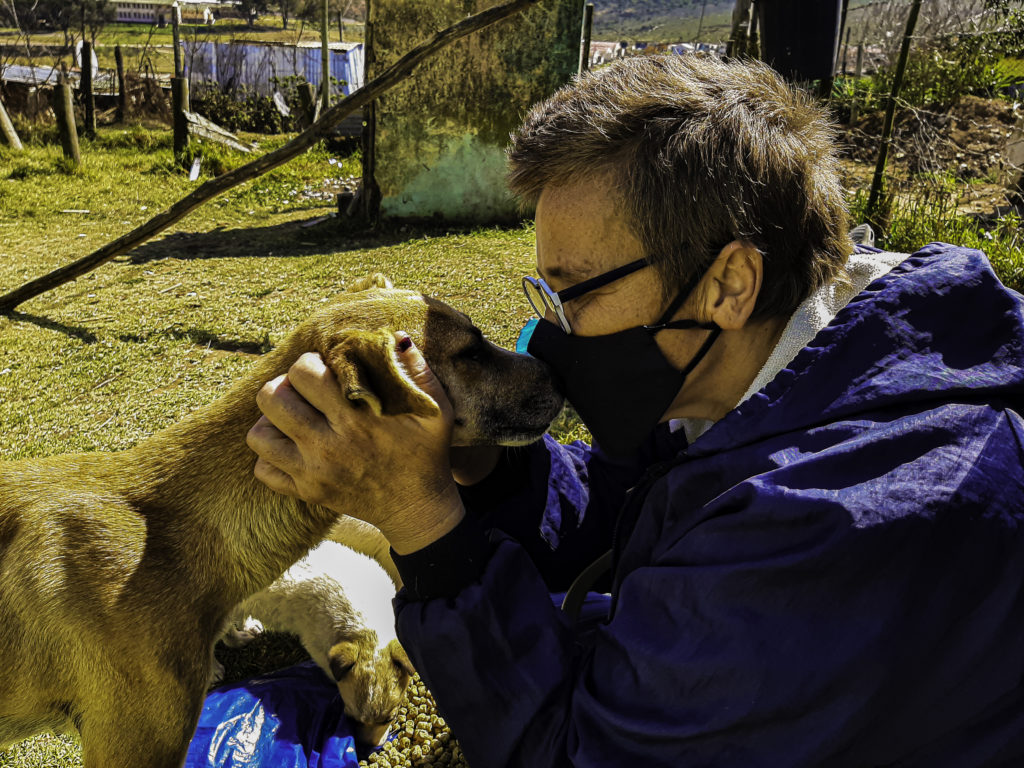 Xolani resident Leticia Dreyer with one of her beloved hounds. Every second day she walks around the township, feeding dozens of dogs. She has been doing this for three years. Photo: Caitlyn Hilliard-Lomas

On 7 September, the Makana Residents Association issued a statement in the GPN Newsletter calling into question Caitlyn Hilliard-Lomas’s Scraps for Strays project. They wrote, “Whilst one sympathises with the concern expressed in Scraps for Strays (Grocott’s 3rd Sept), feeding strays and encouraging them is a strategy which will encourage population increase and bring stray dogs (and other animals) into increasing contact with people.” This is Caitlyn’s response.

It all started with an empty ice-cream container, a boost of confidence and a passion for giving. I headed out of my comfort zone and straight to asking local restaurants to donate the scraps off their plates that were headed to the bin so I could feed them to starving dogs. After starting the Scraps for Strays project in August of this year, I have been met with a lot of support, but I have also been met with some disapproval.

The only difference between the past three years and this year is that I gave my project a title.

Over the years, my dirty takkies kicked up dust on Sunday morning strolls with the strays from the SPCA. I have fed apples to friendly donkeys and leftover bones from Saturday night’s pork chops to the local strays roaming the nooks and crannies of alleyways. I have delivered half-eaten sandwiches to the hands of hungry men.
I have shaky recollections of long division and story sums to help a home of orphans complete their homework. I delivered second-hand books with the corners of pages folded from the SPCA charity shop.

All these valuable experiences are fondly cradled in my heart and are a way for me to share the gift of humanity. Not everything we do needs to count for something, or be recorded, documented, or journaled. Sometimes, a simple act of kindness can not only make someone’s day but can be the highlight of their week, or even month or year.

According to the Stanford Encyclopedia of Philosophy, contemporary utilitarians like Australian moral philosopher Peter Singer advocate that “there is no morally justifiable way to exclude from moral consideration non-humans or non-persons who can suffer. Any being that has an interest in not suffering deserves to have that interest taken into account.”

The question then becomes, “How do we know if an animal is suffering?” To put it simply, their suffering is made evident through their reactions to pain. For example, according to the Animal Ethics Charity organization, the way an animal cries out or whimpers after being injured tells us that they are suffering and are interested in feeling free from this pain.

So, when you walk past a stray dog, and she greets you with yearning eyes and short, fragmented yelps of bark or howl with her stomach growling, she is letting you know that hunger is killing her, and she does not want to feel this pain anymore. Perhaps she was born in a Takealot box the size of a toaster, or maybe she belonged to a loving family for seven years and got left behind or thrown out when they got into debt. Perhaps she was an old guide dog who had no home to go to after her owner passed away. Maybe she belonged to nobody but was cared for by many until they stopped feeling pity after she grew too old to pull off the puppy dog eyes.

We do not know where every dog comes from, nor do we know what the future holds for them. Whether it be living in a shelter for the rest of their lives, roaming the streets until they can no longer see, being impounded, and euthanized or the unlikely chance of being taken into a loving family that they can think of as home. If you are not a vet, or if you are in a position where you cannot take these animals home, then these realities are not for you to decide. They surely are not for me to decide.

But should you be able to help these animals in any way, then nothing should stop you. Regardless of where these animals end up, they deserve a meal in their stomachs. It does not have to cost the world’s worth of food; a simple stale slice of toast or leftover chicken stew may put a stray dog out of pain, even for a little while. There is no need to throw old food into the bin when it could provide sustenance and nourishment to a hungry dog.

The overpopulation of stray dogs is no fault of their own. The local vets are putting in the effort to sterilize as many stray dogs as possible, and we can help by donating our leftovers to these strays. With a simple act of kindness, we can go a long way.

“The greatness of a nation can be judged by the way its animals are treated.” – Mahatma Gandhi.