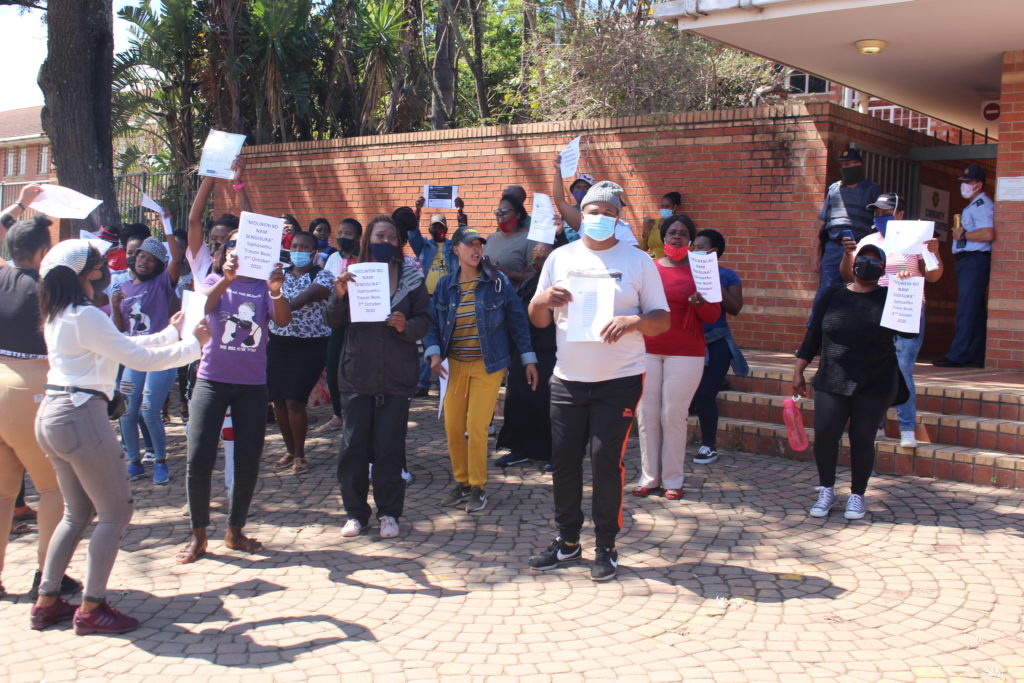 By TUSANI MNYANDU
Local police have distanced themselves from social media posts by a Makhanda policeman in support of a rape-accused friend and the SAPS provincial bosses say the incident will be investigated for possible misconduct. Grahamstown Station Commander, Colonel Mbulelo Pika, addressing a group of around 50 protesters outside the station on Monday 5 October, pleaded for patience. He emphasised that the South African Police Service did not support the views of the police officer and that due process would be followed.

The Economic Freedom Fighters (EFF) staged a protest outside Grahamstown police station in Makhanda Monday 5 October, demanding that a police officer who works at the station be dismissed. This followed statements allegedly posted by the officer on Facebook on Friday 2 October. The posts were in support of a friend accused of rape and currently in police custody. The friend’s bail application was denied.

Led by Makana EFF councillor Siyamthanda Dyantyie, the group of around 50 protesters sang and chanted political songs and slogans outside the Grahamstown Police Station while waiting to be addressed by the Station Commander, Colonel Mbulelo Pika.

A memorandum and a petition with more than 100 signatures calling for the removal of the police officer was handed over to Pika. Accepting the documents, he assured the protesters he had received the messages during the weekend and forwarded them to the provincial authority.

“We as the South African Police Service are not supportive of the views of the member,” Pika said. “These are his own views.”

Pika said he would write a report to the provincial commissioner about the matter. The officer in question would meanwhile be transferred to a section where he would not be dealing with the community. Pika said he did not have the authority to suspend members and intended to follow due process.

“Please bear with me,” Pika said. “By next week I will have an answer for you.”

Pika pleaded with the protesters to wait for the outcome of the internal processes already instituted.  He also promised he will have the provincial commissioner come and address some of the challenges facing the police service in Makana and invited the protest leaders to that meeting. A date for that meeting is yet to be confirmed.

The leaders of the group agreed to give the station commander seven days to come back to them but vowed to continue applying pressure on both the station and the provincial office.

Present during the protest was Unemployed People Movement’s (UPMs) Ayanda Kota, who demanded that the member in question be suspended with immediate effect. He indicated that they would be escalating the matter to the Minister of Police and would also consult with lawyers.

The protesters also noted that the man accused of rape was posting and responding to Facebook messages while in incarceration. They demanded to know how this was possible.

Colonel Pika promised to have the matter reported to the head of the correctional services and again pleaded for patience. He went on to commend the community for taking part in the community policing forums, through patrolling their neighbourhood; however, he implored others to come forward so that they could be screened and be able to participate in the CPFs.

When approached for comment, SAPS Provincial Commander for media and communication Colonel Sibongile Soci said, “South African Police Service view the matter very seriously. An investigation in terms of our Disciplinary Regulations is being investigated.”

“Media Communication in the SAPS clearly states employees may not engage in online communication activities which could bring the Service into disrepute. Communication of this nature must be considered as serious misconduct,” concluded the provincial commander.