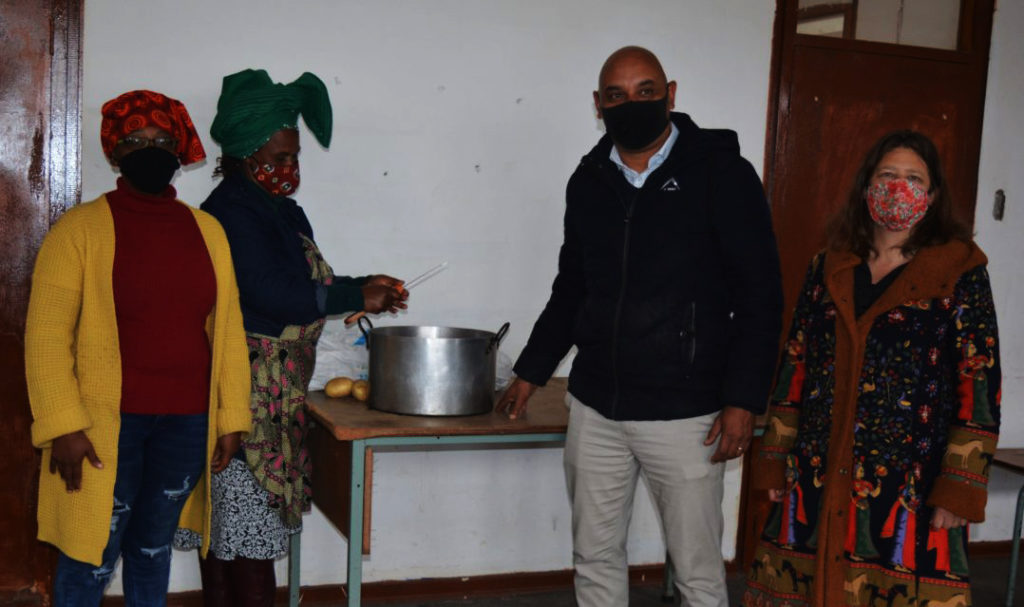 The Rotary Club of Grahamstown Sunset handed over the proceeds from their recent GBS Mountain Drive Virtual Half Marathon fundraiser ‘Miles for Meals’ to the Makhanda Circle of Unity Covid-19 community kitchen project on Friday 2 October.  The event raised R14 000 for the scheme, which equates to about 3 500 meals. While this sounds like a lot of plates of food, it is in fact only about half of the number of people fed by the scheme each week.

While much of the food is cooked in private community kitchens during the week, there were large pots of nutritious food being prepared at the Eluxolweni Community Hall on Friday morning when President of the Rotary Club of Grahamstown Sunset, Javier Martin arrived to make the official handover.

Martin explained that the Rotarians had faced the prospect of cancelling the Mountain Drive Half Marathon for this year with the Covid-19 pandemic limiting sports events.  Organisers decided to make the marathon a virtual event, giving runners the opportunity to run the race in their own time and environment.  A 5km and 10km race was also included along with the Half Marathon distance of 21.1km and the ‘Miles for Meals’ event was launched.

New Rotarian, Robyn Cooper, was roped in to develop the web platform that allowed runners to register and pay a fee of R50, as well as the report-back process where they could log their run with photos, running app details and stories. There were cash prizes donated by the GBS Mutual Bank and two fabulous lucky draw prizes – a game drive donated by Kwandwe Private Game Reserve and a two-night stay at the Umngazi River Hotel and Spa resort on the Transkei coast.

Martin said, “Thanks to Robyn, signing up for the event was really easy, and we now have a platform that we can use for other virtual events.

“Runners were enthusiastic about how it all worked, and we were astounded at the support we had from all over the world. Runners joined in from the US, UK, New Zealand and Japan, as well as from all provinces in South Africa.  And we had many generous local people who made donations to support the project, even if they were not going to run. We had great support from Albany Runners, who always join our organising committee, so it is a joint effort.”

“You turned ‘virtual’ into ‘virtue’,” quipped Tim Bull, secretary of the Grahamstown Residents’ Association (GRA), under whose auspices the Circle of Unity operates. Bull was joined by Ntuthu Blow, Administrator of the GRA, and Gunda Krause, the chair of the Grahamstown Feeding Association, for the handover.

One of the community cooks, Nomakhulu Fondini was on hand to show how she prepares a giant pot of chopped vegetables into a nutritious broth which is served with samp and beans or whatever else is available for the daily meals. Collection of the meals is characterised by orderly queues of mask-wearing children and adults, responsibly keeping appropriate social distancing.

Bull explained that fundraising for the remaining months of 2020 is in progress to ensure that the community kitchens can continue to operate.

“They are fulfilling a critical need at the moment, feeding many hungry residents who have been affected by lockdown-induced job losses. We cannot stop now when the need is greatest.”

Martin explained that his Rotary Club was planning another virtual fundraiser for the community kitchens in November, this time an auction where bidders can make virtual offers for attractive items sourced by Rotarians from donors.  “We hope that we can depend on the generosity of our supporters again for this worthy cause”, he said.