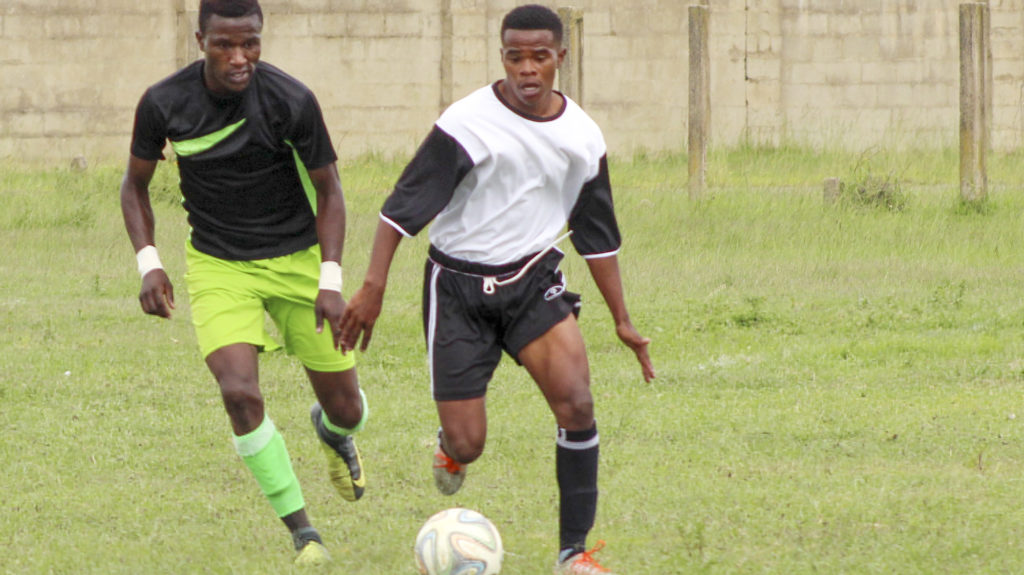 By CHRIS TOTOBELA
All roads led to the home of local football JD Dlepu stadium on Saturday 29 February, where the big guns of Makhanda clashed in the SAB regional league encounter. Struggling City Pirates hosted tittle contenders Maru FC in a much anticipated local derby. The game was delayed for a few minutes during pre-match players’ inspection when one of the Pirates players allegedly failed to produce his playing card.

The player was immediately disqualified from the game and did not take part. The clash finally got under way and the rivals had a serious go at each other. Maru seemed to settle much quicker than their counterparts and threatened their goal mouth. Maru’s attackers were too quick for Pirates’ defence and were often caught offside. Pirates slowly fought their way back into the game and created chances of their own. There were some dangerous tackles flying all over as the midfield battle intensified.

The referee was too lenient, as he left a lot of leg-breaking tackles unpunished. The deadlock was finally broken when Maru’s top marksman and skipper, Vuyani Skeyi, found himself in acres of space after a good cross from the right wing. The evergreen Skeyi kept his cool and slotted the ball into the far corner, giving the keeper no chance as he opened the scoring for his side. Pirates came back and nearly found an equaliser when a well taken free kick just outside the box narrowly flew over the crossbar with the keeper well beaten.

Maru nearly doubled their lead when Inga Madyo missed a glorious opportunity when he came one on one with the keeper, but took long to take the shot and the ball was cleared off his feet. The halftime score was one-nil to Maru. Both teams made some changes in the second half. Pirates had a good spell of 15-20 minutes and looked like scoring, but Maru’s defence stood firm. Maru’s goalie made a superb one-handed save to keep his team in the lead. Skeyi nearly got his brace when he made a dangerous run on the left side and took a good shot that beat the keeper – but not the upright.

Both teams could have easily scored in the second half. They created a lot of chances, but failed to make them count. The game ended with Maru beating Pirates by a single goal. Pirates gave a very good account of themselves and were a much improved side compared to their last outing against Manchester where they were shadows of themselves. Both teams played good attacking football which entertained the fans. The referee made a serious blunder that got the Pirates camp fuming when he stopped the game while Pirates were on the attack, just on the edge of Maru’s box. He blew his whistle to attend to a Maru player who was lying on the turf.

The rules allow him to stop the game if there is a head injury or a serious injury that needs urgent attention. But that was not the case and it is still a mystery why he blew the whistle. He is only human and he will learn from this huge mistake: this was a big game not only for the two teams, but for him as well. This was a very good advertisement for Makhanda’s football, with all the right ingredients for a local derby.