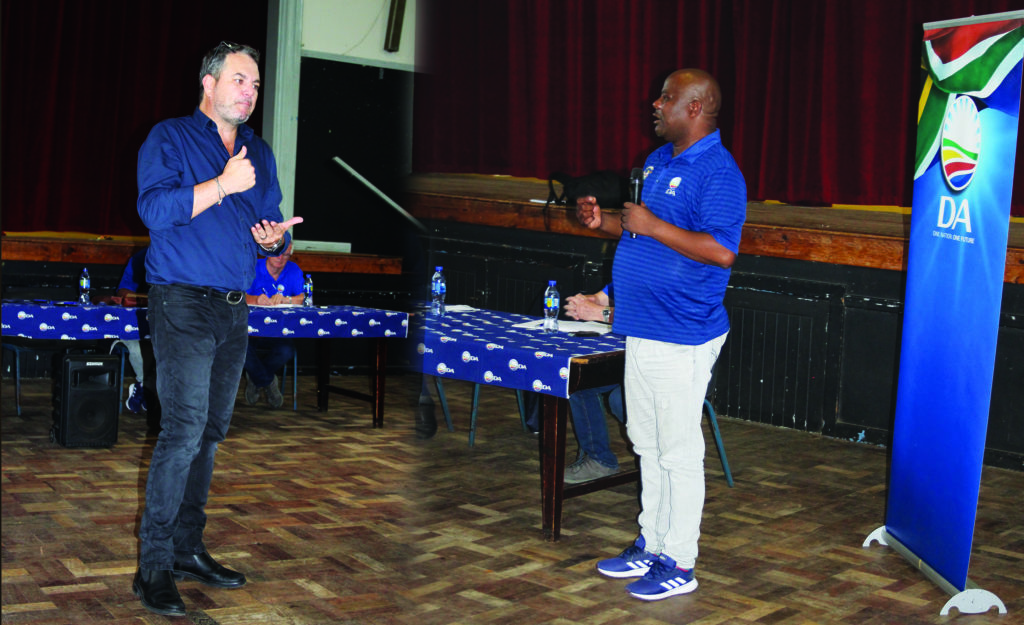 Mutual respect among coalition partners will be crucial to clinching and keeping Nelson Mandela Bay, says the provincial leader of the DA in the Eastern Cape Nqaba Bhanga. Bhanga, who has resigned from the provincial legislature to be sworn in as a councillor in NMB and will stand as candidate for Mayor in the Metro.

Alongside the party’s shadow Minister for and Minerals Resources and Energy, Kevin Mileham, he addressed supporters in the Recreation Hall in Albany Road on Monday. The public meeting followed the provincial policy conference earlier in the day, also in Makhanda. This, in turn, was in preparation for the DA national policy conference in Gauteng next month.

Mileham opened the gathering with a summary of the state of Makana Municipality, following the landmark judgment in the Makhanda High court in favour of the Unemployed People’s Movement. The Provincial government was ordered by Judge Stretch on 14 January to dissolve the municipal council and hold fresh elections to elect new leadership. The Judge cited administrative, financial and service delivery failures in her ruling.

The provincial government has applied for leave to appeal the judgment. The application was set down for this week in Bhisho, where the Province’s legal team requested a postponement. It will now be heard in the Grahamstown High Court on 2 April.

The shadow minister said he had written to Minister of Cooporative Governance and Traditional affairs Nkosazana Dlamini-Zuma, asking her to act on the court judgment. He had not received a reply by Monday’s meeting.

He encouraged the small audience of around 40 to pull out all the stops in ensuring the DA was visible ahead of the next local government election.

The provincial leader was more optimistic, saying that when the struggle for liberation started, not everyone had identified with it.

“This was advice given to me by Govan Mbeki,” said Bhanga said, who cut his political teeth in the youth structures of the ANC.

Bhanga in his address said the DA was the most diverse of all the political parties in South Africa.

“In the DA, black, white, Indian and coloured people are working together,” he said.

Outspoken about his Christian faith, he said, “We are all made in the image of God… we have no choice but to work together.”

He went on to apprise the audience about the goings-on in the Nelson Mandela Bay Metro, which had experienced similar challenges to those in Makana Municipality, especially concerning water.

The situation in the Metro was different from that of Makana, however, in that its challenges were brought about by the unstable leadership under a coalition government. The DA led that Metro from the 2016 local government election until their unceremonious removal on 28 August last year.

The DA was confident about reclaiming the Metro next week, said Bhanga. Born Bennet Mzwenqaba Bhanga, the provincial leader has served in all spheres of government, including as a member of parliament.

Talking to Grocott’s Mail at the end of the meeting, the mayoral candidate said mutual respect by coalition partners would be crucial to clinching and keeping the Bay. He was tight-lipped about the parties whose support the DA has secured, only emphasising that they are open to working with any party. He remained critical of Trollip’s successor but indicated that he trusts UDM President Bantu Holomisa to see the importance of having a stable Bay.