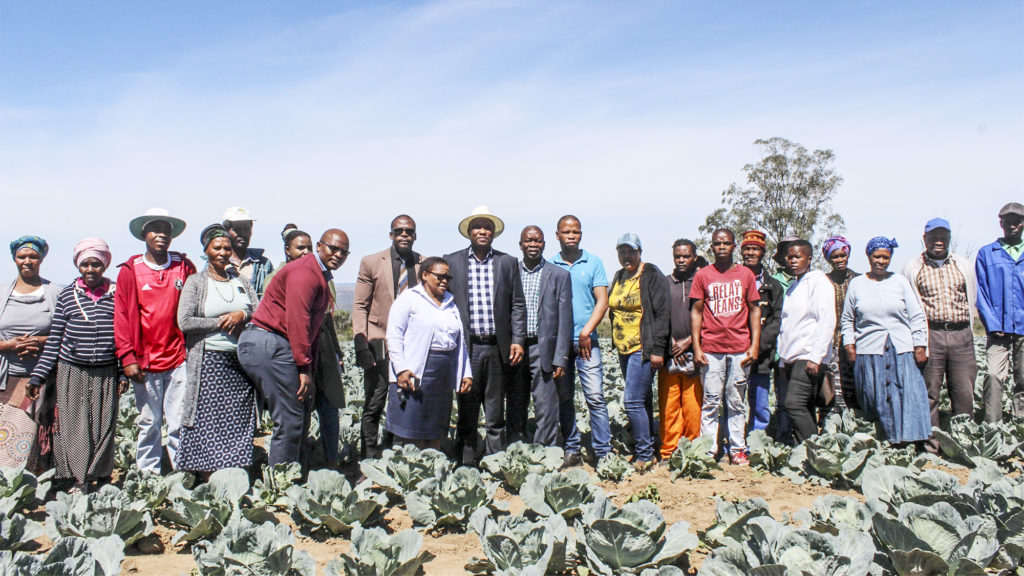 Premier Oscar Mabuyane and officials from his Office and the Department of Rural Development and Land Reform pose for a photo with members of the Radway Green Farm community. Mabuyane was in Makana on Friday 11 October to hand over title deeds to emerging farmers. Photo: Sue Maclennan

“It’s our dream come true,” the Yendallia Communal Property Association’s Mluleki Mtshizana told Grocott’s Mail after he received the title deeds to the land where his and 29 other households have been struggling to farm productively.

Hindering many emerging farmer communities has been that the government remained owner of the land they’d been allocated and so couldn’t provide the security Eskom required to supply them with electricity, or banks needed as collateral for loans for capital equipment, for example.

“We need this so we can move forward, the CPA chairperson told Grocott’s Mail. “We are progressing [in our farming]but we needed title deeds so we could register for Eskom electricity for example.

“I’m feeling very good about this,” he said.

Yendallia, along with its neighbour Radway (27 households) and Yarrow Farm near Sevenfountains (12 households)  have also been provided with funding for development through the government’s One Household One Hectare programme. Site Managers have been appointed to mentor them on a one-year contract.

Mabuyane was also given a tour of the housing and production facilities at Radway, which were handed over to its residents in 2015.

Impressed with the size and quality of the houses, he said, “This is a proper house.”

Alluding to the poor reputation for quality and liveability that RDP houses built in urban areas often have, he said, “If the houses were all like this, we wouldn’t have any difficulty in persuading young people to come and live in rural areas.”

During the 2015 handover, The National Rural Youth Service Corps (Narysec) featured prominently. The youth skills development and employment programme was intended to give rural youth the tools and motivation they needed to be productive in their own communities as a viable alternative to an uncertain future on the urban fringes. Under a quasi-military system, it featured character building programmes and dispatched the youth to rural areas to undertake various rural infrastructure and other development projects.

Young people at Radway were taught brick-making and the community was given a brickmaking machine, so they could continue this production operation; however, when it was shown to the Premier it had a flat tyre and was covered in cobwebs and the co-operative chairperson told the Premier they were waiting for startup funds to pay for diesel and cement.

Handing over a fine flock of colourful tractors, Mabuyane said, “We’re here to hand over these tractors and title deeds so that when ploughing season starts here in the province, people are ready to hit the ground running. So that the people who have been given the land through the process of restitution and redistribution have the tools to go out and work.”