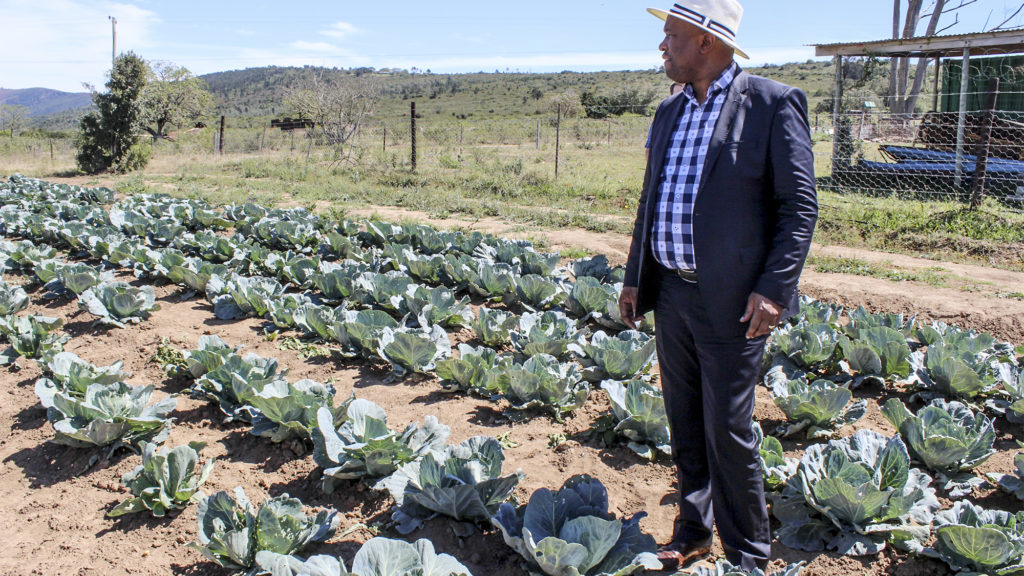 What the Premier said in Makana

In an exclusive interview with Eastern Cape Premier Oscar Mabuyane, Sue Maclennan asked him about the government’s land reform programme, and what he’s doing to encourage a culture of entrepreneurship and clean up the tender system. The Premier was in Makana on 11 October 2019 to hand over title deeds and farming equipment to emerging farmers.

Meaningful land reform is vital for national security. Why has it taken the government so long?

You’re right – you can’t still have after 25 years such a skewed land distribution, with the minority occupying the bigger part and the majority occupying the smaller percentage. It’s one of the causes of social tension and resolving it is a key tool for social cohesion.

Land tenure is not just about redressing the imbalance of the past, it’s about dignity. The indigenous people are the owners of this land and it’s an issue the government is handling very carefully.

To enact real economic transformation you need land, labour and capital. We do have land, we do have labour, and the capital is there in the form of government resources. We should be able to do it. It’s partly political will and putting in place a political programme that will be carried out responsibly but aggressively, to ensure we unite our people.

We have said this country belongs to all who live in it, black and white, and we are united in diversity.

Is the government’s ‘Kawuleza’ campaign in response to pressure from the EFF?

Agriculture is key in our GDP growth plan. It’s a policy matter that we must attend to. Our emphasis on it has absolutely nothing to do with the Opposition or other political parties. They are simply opportunistic – they’re looking at gaps that are there in the system. They don’t have a policy about land. That’s why they’re grabbing land and putting in informal settlements – just to play with people’s emotions.

Here, we are talking about responsible government. Government of the people, for the people, by the people. We’re also a government that understands that these things have happened over centuries.

Taking almost a quarter of a century to change them is too much. This is a fundamental issue we should have resolved. But just taking land for the sake of taking it and not working the land for production purposes is not acceptable.

The government is looking at this issue comprehensively so that when we take land, it will be taken for production purposes and for economic development, to help our country.

This country should be the breadbasket of not only our country, but the sub-Saharan region as well as the continent. We have huge amounts of arable land that we haven’t been exploiting.

We can’t have goldmines here, but we do have land. We should be doing something much better with it.

What are you doing about cleaning up the tendering system?

The tender system can’t help us. It simply swells the economy – it doesn’t grow the economy. You sleep today being the poorest of the poor; you wake up a millionaire tomorrow because you’re connected and can get a tender. You’re a millionaire for a month or two – and down the line you are no longer a millionaire.

We want to invest in proper business acumen, entrepreneurs. That’s exactly what we’re trying to revive because we’re going to grow this economy through SMMEs and co-operatives.

The tender system is a very complicated space and people tend to think it’s just about politicians.

Constitutional democracy is about accountability, responsibility and transparency. If these principles are put in place, a person will understand very well that if they’re the chairperson of a bid committee, someone is watching their back.

That said, the tendering system on its own hasn’t really been able to open up opportunities. That’s why you’ve got a skewed arrangement: big companies continue to flourish because the tender system is about looking at price and the capability, without looking at the support required to push up people who should be able to get into the system as well and expand their horizons.

So we are acknowledging the weaknesses of the system. We are doing everything possible to ensure that we cut [tender abuse]out of our system.