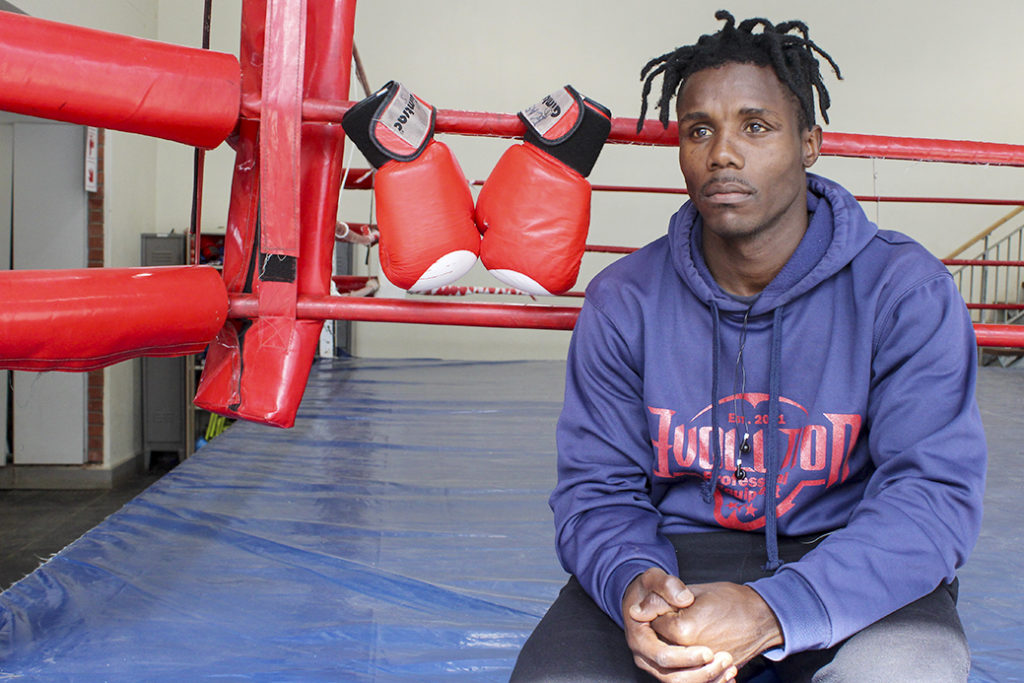 Boxer must fight by end September to remain SA champ

By CHRIS GILILI
Makhanda based, SA Champ Mziwoxolo Ndwayana faces the possibility of vacating his SA Champ title unless he stages a fight by the end of September. In March this year, Ndwayana defended his SA title against East London boxer, Odwa Gaxa.
But while the frustrated former WBF title holder, complains of lack of support from his home town, public service watchdog PSAM says it would be questionable for a local municipality to foot the estimated R300 000 it would cost to stage a title fight.
“Ever since I won this title in September last year, there was not even a single gesture of appreciation for me. It was as if, nothing had happened,” a frustrated Ndwayana told Grocott’s Mail. “Even though i had made history, by being the first boxer from this region to win this title.”
“I sacrifice so much to win these titles. It requires a lot of hard work. I pay for everything myself – from [nutrition]to transport. Not once since winning this title, has the municipality offered any kind of sponsorship or support.
“I am very frustrated and this is killing my spirit. No one can fight with such stress: without support, one lacks confidence,” the 32-year-old boxer said.
His father and trainer and Bulelani Ndwayana, said, “We thought by keeping boxing alive in Makhanda, we are also in a way assisting, by keeping young people of the streets and away from crime.”
” All that we ask for, is the municipality to help us keep the title at home. We can’t lose another title just like this. This is so demolishing to us.”
According to Bulelani, they have also been writing letters to local companies, but none offered a helping hand.
In 2016, Ndwayana’s World Boxing Federation title was taken from him because he failed to stage a fight. This would be the second title he lost in this manner. He has to fight a Joburg based boxer by end of September this year.

Makana Municipality have remained tight-lipped about questions sent to them. However, an inside source who asked to remain anonymous said the municipality would not be in a position to support such a cause given its financial situation. In addition, endorsing requests to local business for sponsorship could be misconstrued.

Makana’s apparent backing off from supporting a local title defence by Makhanda’s homegrown world champion boxer is disappointing both to the boxer and local fans, but it’s probably the correct decision, says public service watchdog PSAM.
Director at the Public Service Accountability Monitor Jay Kruuse said in response to questions about Makana’s role in supporting local talent, “It’s unlikely that a municipality has budgeted such funds and it may attract scrutiny in the absence of a programme or line item allowing for such targeted support.
“While it’s not unusual for a municipality to set aside funding to support facilities, material and infrastructure associated with a sport – especially if it’s taking place on a municipal asset (facility), this ordinarily is to support users in general and not specific  individuals.
“The Department of Sport, Recreation Arts and Culture (DSRAC) is a more likely avenue to explore more direct and targeted support of an individual with impressive skills and who needs support.”
Department of Sport, Recreation, Arts and Culture spokesperson Andile Nduna said, “Honestly, the department does not have any funds to support individual boxers. Professional boxers have managers and promoters that ought to organise fights regularly for them, and therefore generate the necessary monies needed for such.”
He further added that Ndwayana could fight for his title anywhere.
“Mzi is not obliged to fight in Makhanda. His camp has all the right to engage other promoters to give him a chance in any other tournament before the end of September to box,” added Nduna.
Previous ArticleGrahamstown Primary School vandalised as R55M renovation stalls
Next Article Kowie and Klipfontein back to winning ways