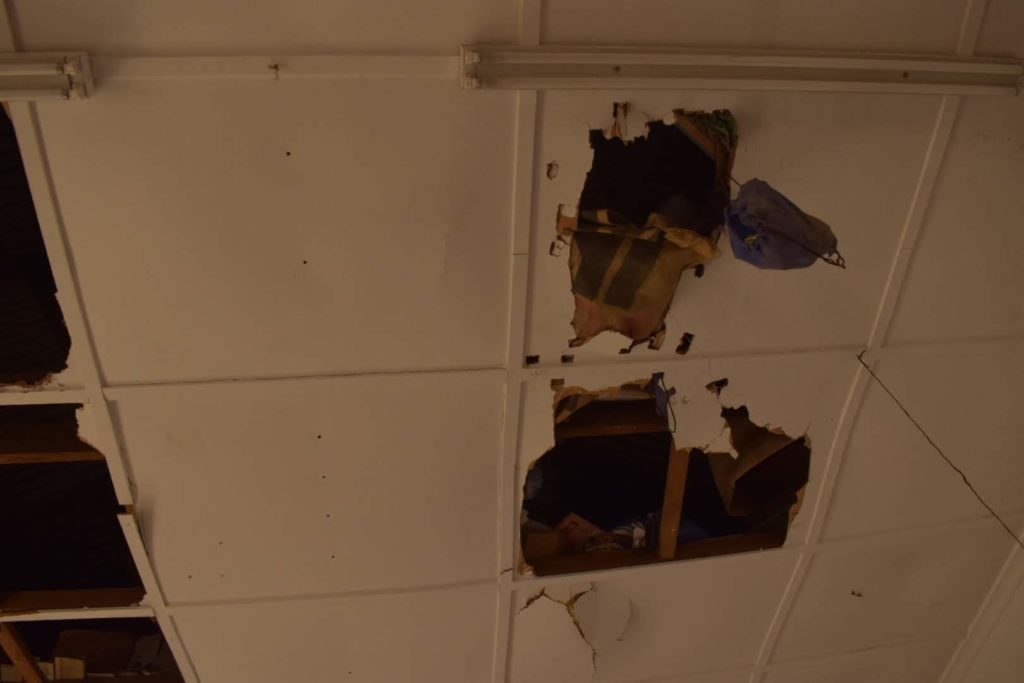 Grahamstown Primary School has been vandalised and stripped of assets following the collapse of a R60-million upgrade. Photo: Michelle Banda

Thieves and vandals have wreaked havoc on the original premises of the Grahamstown Primary School (GPS) after contractors recently abandoned a R55-million upgrade to the school due to non-payment by the Department of Basic Education. Michelle Banda and Rod Amner report.

After years of planning and negotiation, Grahamstown Primary School was looking forward to a substantial revamp – including the installation of a media centre and library – by the Department of Basic Education (DBE).

In a recent interview with the EP Herald, Education MEC Fundile Gade said the department had only R1.6-billion of the R4-billion needed for the completion of infrastructure projects in the province. A number of schools across the province have been affected by the bungle, including Grahamstown Primary. Gade acknowledged that the DBE had overreached in its infrastructure project for the financial year.

In February this year, excited staff and learners moved into makeshift prefabricated classrooms in Albany Road to allow work to start on the upgrade to the original buildings.

But, by early July the disgruntled contractors had not been paid by the DBE and were forced to hand the school’s keys back to the implementing agent, the Department of Public Works (DPW).

With the contractors off-site, the school was especially vulnerable to thieves and vandals.

According to Department of Public Works communications director, Vuyokazi Mbanjwa, her department had entered into contracts with service providers on behalf of the DBE. “The project will [re]commence when the DBE avails funds,” she said.

However, Eastern Cape DBE spokesperson, Malibongwe Mtima, said the DBE had “no additional budget” for the project despite the fact that the funds had been allocated to the project after years of planning.

Mtima said the school had been included in “the list of disasters and budget requested from the Minister of Cooperative Governance and Traditional Affairs (Cogta) for emergency funding”.

“Cogta has responded to say the DBE should use its budget, which is committed,” he said. “It’s currently a stalemate, but we are expediting the process to ensure we deliver on our promises.”

Meanwhile, devastated principal Leon Coetzee said the school feels betrayed by the DBE and DPW and are concerned that they will have to endure many more years in their temporary and crowded prefabricated school before the project is resuscitated – if it ever is.

He is also uncertain whether the damage inflicted on the school will ever be compensated.

Coetzee said it would “be a sin” if the building is left in its current state.

“We were promised a state-of-the-art school – now we’re left in the cold with no alternative because we put our trust with the DBE and DPW. Frankly, we are disgusted,” Coetzee said.

In a desperate attempt to prevent the building from deteriorating further, Coetzee secured a donation of two palettes of bricks from Makana Brick, which he hoped to use to seal the stolen doors.

However, on Wednesday he was told by DPW officials that he would not be allowed to use them because the building was considered a heritage site.

“They are stymying our plans to secure the building – they just don’t seem to care,” Coetzee lamented.

“It isn’t just the theft and vandalism that irks – it is the rip-off of the dignity of a sacred place, which is in fact considered a heritage site,” he added.

As an interim measure, Hi-Tec Security recently posted a guard at the school, which has staunched the theft and damage to the school for now. On behalf of the SGB, Coetzee expressed deep gratitude to HiTec for their “voluntary contribution to the cause of saving the school”.

The renovation plans included the building of a media centre, the painting of classrooms and the perimeter fences, the planting of trees and a garden makeover, cleaning the storerooms, and the referencing and sorting of library books.

Instead, the old school now stands a ghost of its former self.

Expectations have been dashed and school morale is low, Coetzee said. However, he said teachers and parents have also graciously expressed gratitude for the temporary school, which, although cramped, is a “clean and friendly environment”.

In partnership with the Public Service Accountability Monitor, Grocott’s will over the coming weeks continue its investigation into the apparent evaporation of the R55-million grant allocated to the upgrade of the school.