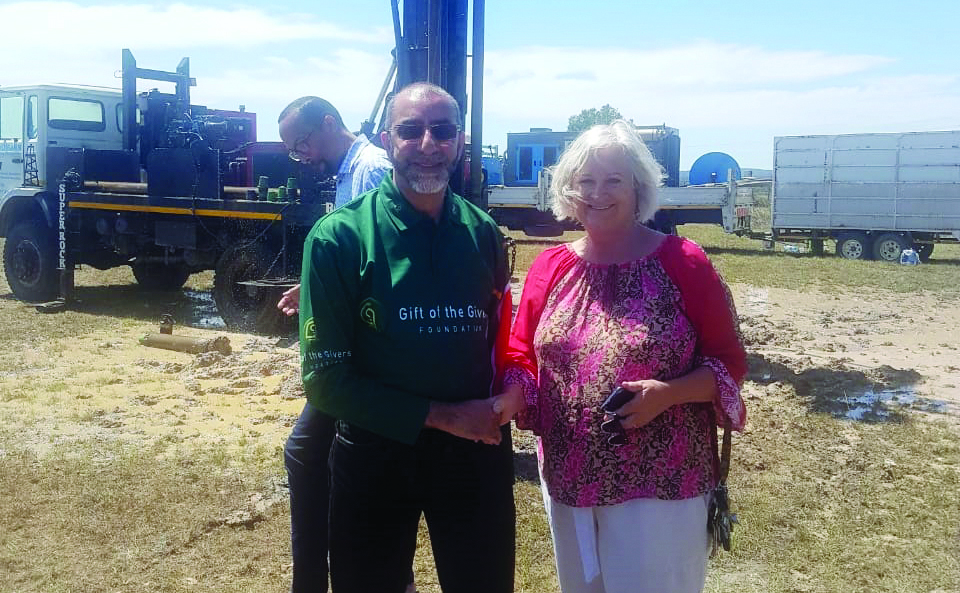 Gift of the Givers has assured Ntsika Secondary School of funds to test the water produced by the borehole they sank there last month, as well as to run the filtration plant there until the end of the financial year. In addition, they are sending an engineer from Cape Town and a local electrician to ensure the filtration plant remains safe and effective.

However, there was drama last Friday during what those involved have agreed to describe as a miscommunication. It seemed, for a few hours at least, that the organisation was about to turn off the electricity to the filtration system, in preparation for removing the tanks and filtration plant and sealing the borehole. But they met their match in Principal Madeleine Schoeman.

Makhanda earlier this year experienced serious water problems as the combined result of drought and poor infrastructure maintenance. Humanitarian relief organisation Gift of the Givers were welcomed as they arrived first with bottled water, as some areas of Makhanda entered their second or third week without supply. They then began with the longer term, more sustained intervention of drilling boreholes across the municipality.

During the outage, schools had battled to stay open as toilets became blocked and even drinking water was unavailable. In February, Ntsika Secondary School was one of the first grateful borehole beneficiaries, along with a pump and filtration equipment.

However, on 15 May Gift of the Givers announced their withdrawal from Makhanda, along with their Jojo tanks and filtration systems. This was because Makana had appointed contractors to do paid work that GoG said they had already completed at no cost to the municipality.

Intense negotiations with GoG involving various government departments (DWS, Cogta) as well as Amatola Water and the Municipality followed. On Friday 24 May GoG announced that agreement had been reached whereby payment to them would be considered for 11 of the 15 boreholes; however, GoG said, they would be withdrawing their filtration systems and tanks.

When they arrived at Ntsika to remove the borehole equipment, however, Schoeman refused to let them in.

“It did not sit well with the Ntsika staff or its SGB when we were informed early on Friday morning by [Gift of the Givers hydrologist] Dr Gideon [Groenewald] that GoG would be turning off the electricity to the filtration system,” Schoeman told Grocott’s Mail.

This was to be followed in due course by GoG removing the tanks, the filtration plant and sealing the boreholes.

“The upshot was that I refused GoG access to the school property and permission to remove any donation from the school. My take was that any donated materials/ equipment belonged to the Department of Education and that we had had no part in the agreement with the Municipality.”

In a day of emails and phone calls, Schoeman reiterated the school’s and its SGB’s stance.

“By mid-afternoon I was phoned by [GoG Strategic Partnership Director] Badr Kazi to say that he had personally adopted the water project at the school, no equipment would be removed and he had secured funding for the testing of water and the running of the filtration plant until the end of the financial year.

“To say we were overjoyed is an understatement,” Schoeman said. “The water at Ntsika is safe and belongs to the community of Makhanda.”

Kazi confirmed to Grocott’s Mail he had given Ntsika school and its Board the assurance that the borehole equipment and the filtration system would not be removed. There was concern, however, about the operation of the filtration system and Gift of the Givers would send an engineer and an electrician to check it.

“The rationale behind Dr Groenewald’s actions were his concerns over the maintenance of the system, as no prior arrangement had been made with the school, nor a succession plan of intervention drawn up,” Kazi explained. “Justifiably concerned about the quality of the water, he decided to take pre-emptive measures to safeguard the water quality until alternative arrangements were made.”

Education spokesperson for the Eastern Cape Mali Mtima explained that any donation to a school is registered as an asset on the Department’s books.

“That’s how we account for and track such donations,” he told Grocott’s Mail yesterday, explaining why Schoeman’s stance had been legitimate.

“But I believe that Mama Schoeman reached an understanding with Oom Gideon and that after the initial misunderstanding, he has rallied fully behind the Department of Education and the school.

“The equipment from Gift of the Givers has helped the surrounding local community and it has made a big difference to the school. The Department is extremely grateful,” Mtima said.