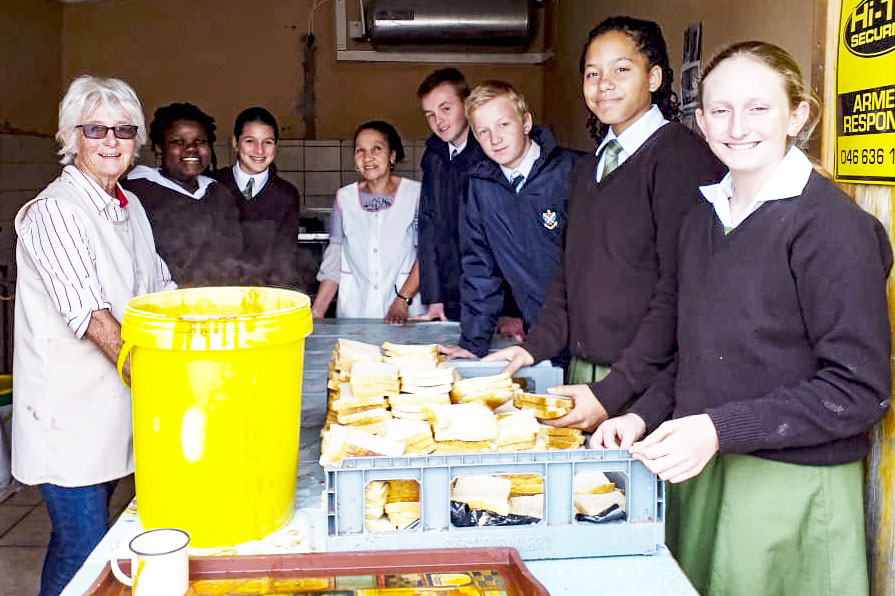 The Grahamstown Feeding Association received a welcome boost when a group of DSG and St Andrew’s pupils not only raised R2 500 for it, but also spent a morning helping out at the Knight Street facility.

The organisation has provided a daily meal for Makhanda’s poorest of the poor for more than 20 years. Last year they provided 66 559 meals according to volunteer soup kitchen worker Kay Marx.

But without a state subsidy and with the price of food going up, it’s a constant struggle to keep the operation going.

“The dramatic rise in the price of food has made the work of the GFA more vital than ever: often what we provide is the only meal of the day for those who come to us,” Marx said.

“We receive donations – some of them very generous – and we’re extremely grateful for those. But it’s still difficult to afford the operation.”

The Association provides meals at three sites across Makhanda five days a week: The CBD (Knight Street), Vukani and Joza (the old indoor sport centre). On Tuesdays, Wednesdays and Thursdays, this is soup with three slices of bread. On Mondays and Fridays, they receive peanut butter sandwiches with soup.

The busiest food station is the Knight Street one, which serves 70-100 people a day.

On average, they spend R18 600 a month. Staff are long-time kitchen manager Monica Rensburg and transport manager Winston Goliath. The GFA has an eight-person management committee, whose members volunteer at the service sites.

It pays R500 a month to rent a room in the parking lot below the city hall, and Hi-Tec undertook to provide security there after a break-in a few years ago.

Alongside the groceries for the meals, the expenses are gas for cooking, petrol and vehicle expenses.

The Association reluctantly stopped buying soya for the soup when food prices climbed and the twice-a-week peanut butter is now the main protein source.

So when the DSG and St Andrew’s pupils announced they not only wanted to help make sandwiches at the soup kitchen, but also had R2 500 to hand over, the committee was delighted. They raised the money through organising the Junior Social on 11 May. Learners donated R10 as an entrance fee.

But their involvement hasn’t stopped there. Community Engagement Officer at St Andrew’s, Ncumisa Mzaza, said they were in the process of starting a vegetable garden at St Andrew’s.

“We have already identified a piece of land behind my office to do this,” Mzaza said.

If you would like to donate to the Grahamstown Feeding Association, they will be very grateful for your support. Here are the details: