Reason to brave the rain 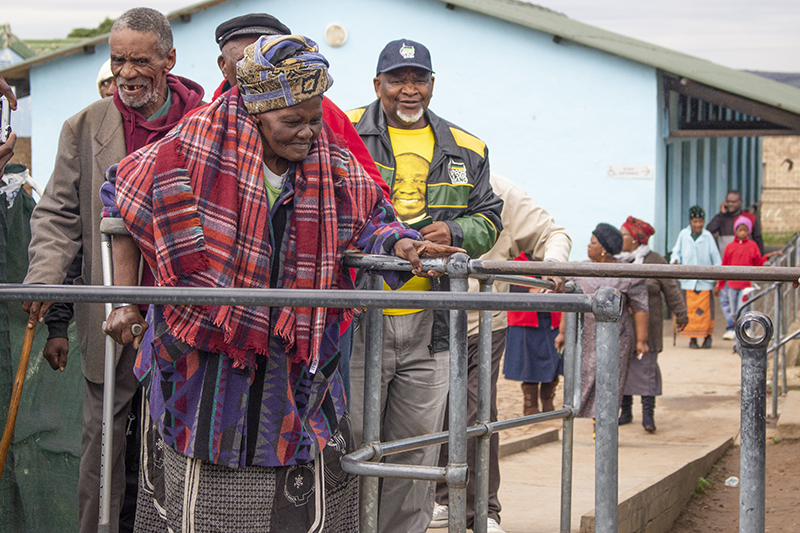 Despite facing difficulties with walking, 85 year old Makinana Nontontle could not miss voting in this year’s election, 8 May 2019. Ward 2 councillor Ramie Xonxa is looking on. Photo: Zintle Rwaxa

When the Grocott’s Mail team reached Joza and Extension 10, it was colder, wetter and even muddier than any of the farm roads we’d just come off. Asikelelwe Pezisa, Zethu Hlubi and Sue Maclennan report.

Around 3pm, Samuel Ntlebi Primary School in Joza was abuzz with voters and IEC staff said it had been like that all day.

Outside, on the pavement opposite the school’s entrance, tables draped with party paraphernalia stood abandoned and in soggy disarray, their operators huddled in the shelters of any doorway they could find as the rain pelted down.

A tip-off took us to the green-and-blue striped tent behind the flats in Extension 10 and it was a challenge to decide which line of muddiness was the road. Named in the IEC’s list of voting stations as the Assumption Clinic Tent, it was (very) roughly in the vicinity of Konongendi. With rain pelting down and the temperature now down to 12C, clutches of voters huddled inside.

Grocott’s Mail had been told that the voting set-up there was inadequate and that voters were being transported by their parties to alternative voting stations. But while the tent crowded with cold people, it was calm and orderly and we didn’t observe anything unusual there. The first votes counted in #Makana were that station, where there was a voter turnout of 60.12%.

Across Joza Street and beyond an expanse of litter-covered land, the Umzi Wasetiyopiya Catholic Church was also packed with people in coats, scarves and beanies. Of a possible voter total for that station of around 1 800, 1604 had voted by 4pm.

There, Xolo Dlamini was very clear about why he was there.

“It is up to me to choose who I want, so that’s why I’m here,” he told us. “I want to choose exactly the party that I want to govern our country.