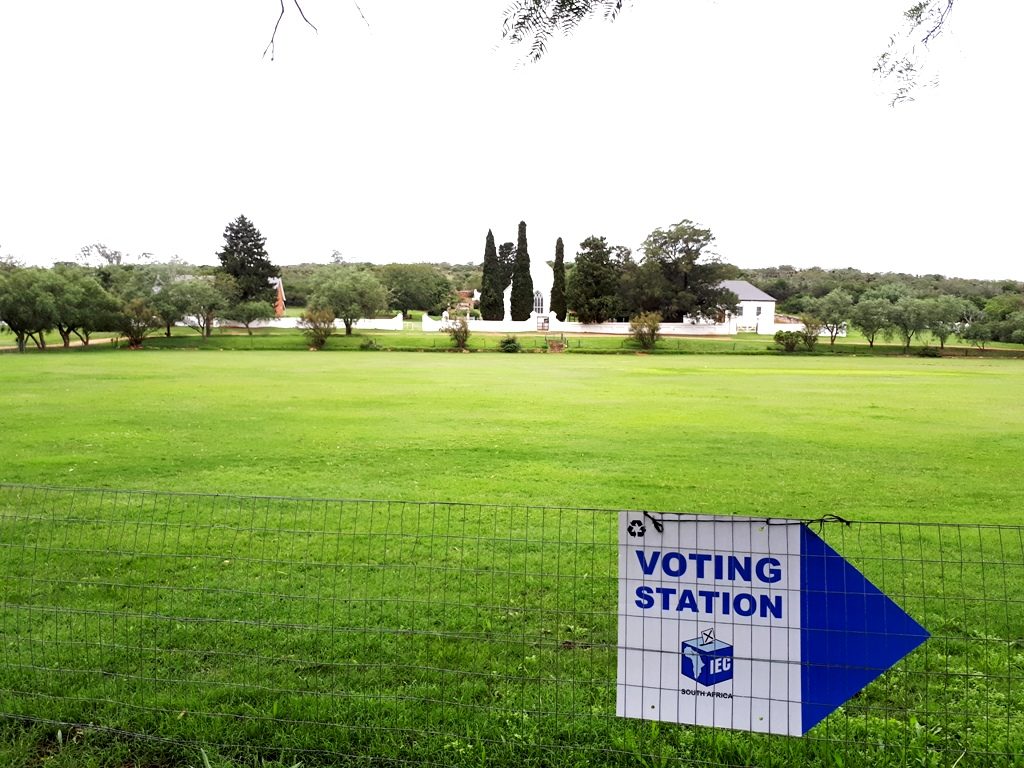 In Salem people trickled through the Cricket Club voting station, where a crackling fire in the hearth was an attraction. Photo: Sue Maclennan

In Alicedale the mood in town was calm and people wearing ANC, EFF and DA T-shirts greeted each other on the long road from Transriviere and KwaNonzwakazi townships to Alicedale Town Hall, or even walked it together. Two community halls have remained unuseable after being burnt and vandalised and both the DA and ANC provided transport to the voting station at the opposite end of the main road.

Around 400 people had voted in Alicedale by midday. The police said things had been very quiet and that everyone was just really happy to be casting their vote.

A voter who only identified himself as Lungisile said, “My reason for coming to vote today is because I have waited for this right and don’t want our government to lose control.

“The difference that my vote is that it will add to those who are also voting and free black people so they don’t go back to oppression. That’s the reason we have come here and waited to vote. We never want to stop voting.”

Dolly Cakhwebe said, “I voted because I wanted change as I do not see any changes happening.  Life was better before this democracy: the unemployment rate was not so high because the railway line was still active.  Life was better then. Everything has slowed down now and is not as efficient.  I want the government to give us free education and build parks for our children.”

In Sevenfountains, too, ANC, DA and EFF supporters and party agents chatted freely. Regina Busakwe, 73, was one of many who had walked the long muddy road to her vote. More than 200 had voted by 11am.

Pensioner Galekile Bheyi said, “I woke up because I had to vote. Times were tough in the past so I had to vote again.

“Maybe, by the time I die, there will be something that I have received.  We wanted houses and they kept on promising us that they will build them for us.  Years are passing by and I do not know if we will even receive these houses.

“It seems like the quality of life in Makhanda is better because they receive service delivery.  Some of us leave Seven Fountains for Makhanda, Extension 10 and those people have houses built for them.

“They promised that they will build houses for us as well at the same time they were building houses in Extension 10. We have not had our houses built for us.  However, we are still hopeful.”

In Salem, a special attraction in the wintry weather was a glowing log fire in the Cricket Clubhouse voting venue. Of a possible 523 voter turnout at that station, 206 had voted, with 20 special votes completed earlier in the week.

John Kinnel said what he wished for was “more honey out of my beehives” ‘ but he also said, “My vote may be the one vote that changes everything so I don’t want to waste it.”

Kangele Njingana who lives on Avondale farm said they would like skills and materials to make the farm operational. Water was a problem: the Gift of the Givers helped a lot, but they needed a sustainable long-term solution. She was voting in the hope something would change.

Not a single voter was in the Manley Flats sport club voting station late afternoon. With officials cagey and the weather matching the mood, it was time to call it a day.