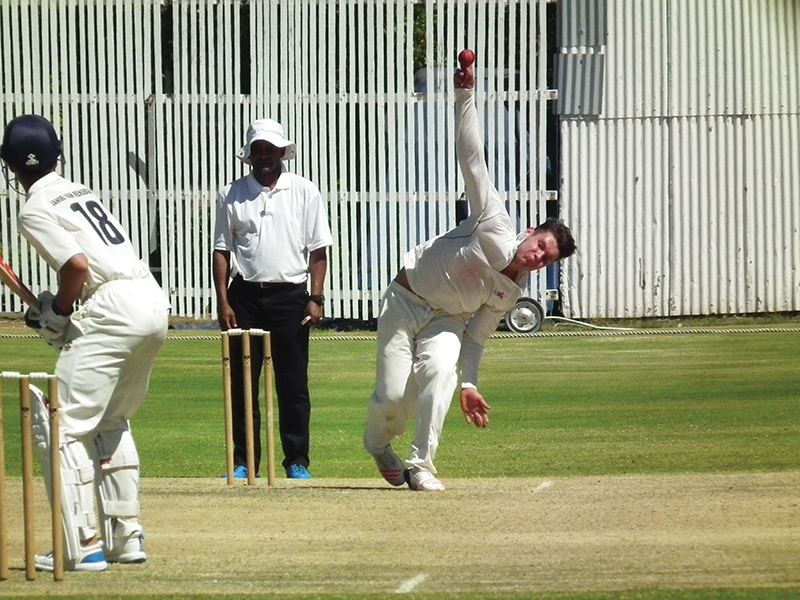 Miles Danckwerts in action for the St Andrew's College 1st XI during the Grahamstown Schools' Cricket Festival.
The Grahamstown Cricket Board’s (GCB) leagues are heating up towards final round of the season, with a number of teams vying for top spot in the 1st and 2nd leagues.
By sharing points against St Andrews due to the rain, Southwell 1sts did enough to reach the top of the GCB Bathurst league, winning it at the same time.  Station Hill beat Salem 2nds to sneak into the top spot of the GCB 2nd league with 43 points. Station Hill has to beat Shrews next week to clinch the GCB 2nd league while Rainbows (40) has to beat Salem and hope that Station Hill lose, in order to stand a chance of winning the league. Lastly, Southwell (29 points) and Cuylerville (26), meet in a finale that will decide the winner GCB 1st league.
Manleys vs Willows
In extremely hot and humid conditions at Manleys on Sunday, the home side surprised Willows with a comprehensive 114 run bonus point win. Manleys batted first and scored 209 (48). Veteran Andrew Marshall (50) and captain Francois Van Rooyen (56), were the stand-out batsmen for Manleys. Bryon Wakeford (39) and Ian Booth (27) also contributed with the bat. Athi Kota 3/37 (9), Thandisile 2/28 (10), Melville Daniels 2/46 (10) and Marquin Loutz 2/30 (6), were amongst Willows’ wicket takers.
Willows opening batsmen who have struggled all season, once again disappointed. They gave their side a slow and poor start, immediately putting pressure on the team. Manleys’ pace and swing bowlers restricted Willows to 95 (28 overs). Loutz made the top score with 22 runs. Van Rooyen bowled 3/23 (6), Bevan Bennet took 3/29 (6) and Ian Booth claimed 3/26 (5), finished off the brilliant performance for the win.
Cuylerville 2nds vs Shrews (20 overs a side)
With play reduced to 20 overs per side due to the weather, Cuylerville 2nds batted out an impressive 94 run bonus point win over Shrews. Cuylerville opened the batting and posted a strong 147 all out in 19.5 overs. The top scorers in the Cuylervile lineup were Simon Du Plessis (35), Gary Fletcher (25) and Morne Van Wyk (19). Eddie Greyling (3/44 off 4 overs) and Uzile (3/31 off 4 overs) provided Shrews their best shot with the ball, as they were the top bowlers from out of the Shrews lineup.
Shrews Fought hard to get back into the match. Their top Batsman, Matt, went out for only 16 runs, thus setting the tone for the doomed chase. Van Wyk (3/8 off 4 overs), Du Plessis (3/26 off 4 overs) and Kyle Handley (2/9 off 3.2 overs) saw off the Shrews batsmen and secured the win for Cuylerville.
Here are the remainder of the weekend results from the GCB leagues:
Salem 2nds vs Station Hill
Station Hill 167 all out
–  Riaan Jacobs 62, Nathan Hilpert 28, Sipho Saki 20, Andy Jones 19*
*  Ross Pittaway 3/40, Mike Mattison 2/22, Matt Liesenberg 2/30
Salem 61 all out
–  Mike Mattison 11
*  Cody Jones 4/26 (6), Nathan Hilpert 3/6 (2), Franklin Jacobs 3/12 (2.1)
Station Hill won by 106 runs and bonus point
Shrews vs  Kenton
Kenton 54 all out
Shrews 53 all out
Kenton won by one run
Manleys’ 2nd team were awarded the maximum points for their game against Tiger Titans, as the Titans failed to produce a team on the day. Southwell and St Andrews shared their match points after poor weather resulted in play being abandoned.
Previous ArticleHeartbreak for policeman as rescue dog goes missing
Next Article TUT tame Rhodes’ Stallions