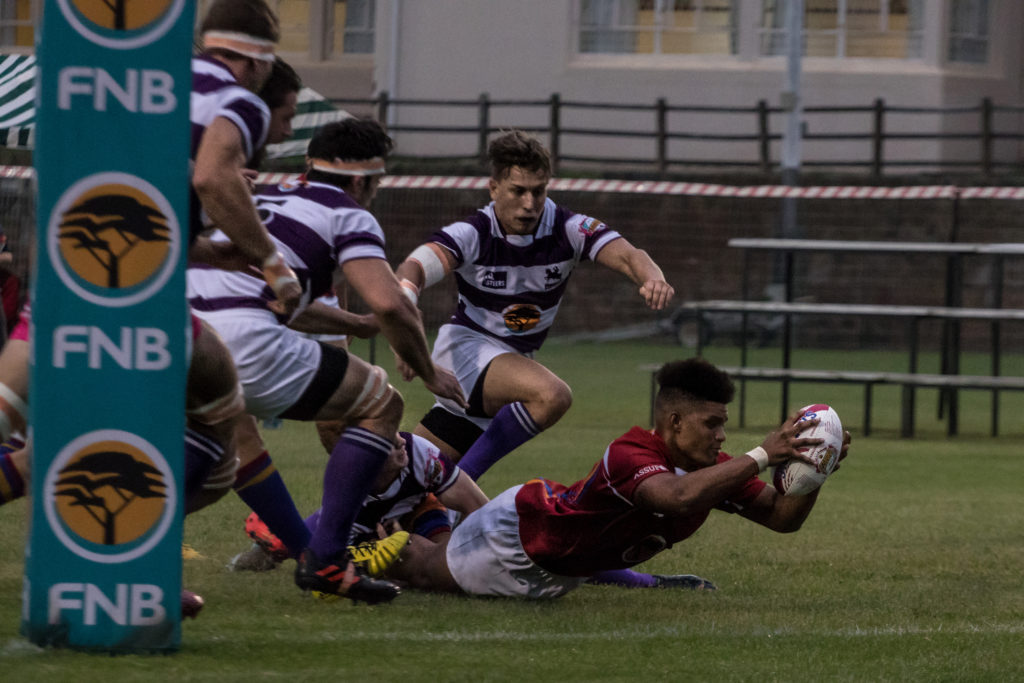 Matthew Mpofu of TUT crossing over the line i9n their match against the Rhodes Stallions. Photo: James Fowler

Despite the miserablr weather 19 February, Rhodes University students came out in numbers to “back their boitjies” at the first Varsity Shield Rugby match of the season against the Tshwane University of Technology (TUT). The Rhodes 1st XV team faced TUT at Rhodes Great Field, but despite the buoyant mood, they were no match to the well-oiled Pretoria side. TUT won 26-7.

Rhodes were awarded a penalty kick after an intense scrum half battle and managed to narrow the gap on the score board, with Aviwe Ntuto’s  kick securing two  points. In the 31st minute of the first half, however, TUT once again showed their dominance as they crashed over for a try and a conversion to go up 16-2.

In a brilliant display of team effort, the Rhodes side got an open opportunity to secure their very first try for the evening but crumbled under pressure and lost control of the ball. The home side did not drop their heads after the slip-up and kept fighting until the dying seconds of the first half when they celebrated a well-deserved try (although they unfortunately failed on the conversion). Half-time rang at 16-7 in TUT’s  favor.

After an uneventful third quarter, TUT put some more points on the board halfway through the second half, with  Mpofu crossing over for his second try. Jason Makhani converted the try, which was scored during Rhodes’ power play, meaning that it was worth 10 points. This extended TUT’s lead to 26-7.

Neither team was able to cross the whitewash again in the second half, so the final score remained 7-26 to TUT. Rhodes 1st XV boys rugby coach, Qondani ‘Carlos’ Katywa was upbeat after the match and  encouraged supporters to come back. “Remember that the purple army will forever continue to strive for greatness,” he said, “the stallion will race until the end, it’s not over until the purple army says so.”