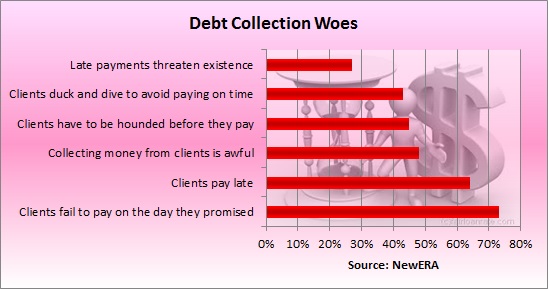 A new website, www.gentlereminders.club, aims to help small businesses with managing their cash flow, as many businesses fail because creditors did not pay them on time or refused to pay despite receiving goods or services from the business.

Deputy Minister in the Presidency responsible for Planning, Monitoring and Evaluation, Buti Manamela, said a failure to pay invoices within 30 days is a financial misconduct. The government at central, local and provincial level is however part of the problem. In April 2016, there were 11 375 invoices due by national departments that were paid after 30 days with a value of R327 million.

Following growing concerns by businesses over the non-payment of invoices the department established a unit to deal with the 30 day payment of invoices in April 2015 to monitor the performance of central government departments in this indicator, but as yet no unit has been established to monitor the performance of provincial and local government entities such as Makana Municipality.

A survey of 826 South African businesses conducted by the economic rights group, NewERA, revealed that: 73% say that customers promise to pay on a certain date, then do not honour that promise; 64% say they experience late payments; 48% say that collecting money from clients is awful; 45% have to continually hound customers for payment; 43% say that customers duck, dive and avoid reminder emails and 27% say that late payments are a major problem and threatens the continued existence of their business.

Three out of every five companies in South Africa fail despite showing an accounting profit, according to Frank Knight, CEO of credit management service, Debtsource. When there is no cash flow to pay rent or salaries a company is vulnerable to failure, no matter what its perceived profit based on receivables that may be paid late or never.

The Gentle Reminders Club, is an online platform where businesses small and large will be rewarded for paying their accounts on time. More importantly, it will also include a watch-list for bad-payers. Both the customer and the supplier will be able to discuss the invoice using a simple confidential chat room that limits the need for awkward and constant collection emails and phone calls.

Entrepreneur Scott Cundill first tested the idea with his LinkedIn connections. In a matter of two weeks, and without any actual functionality available, almost 500 businesses and bookkeepers from over 15 different countries signed-up. The majority were from South Africa.