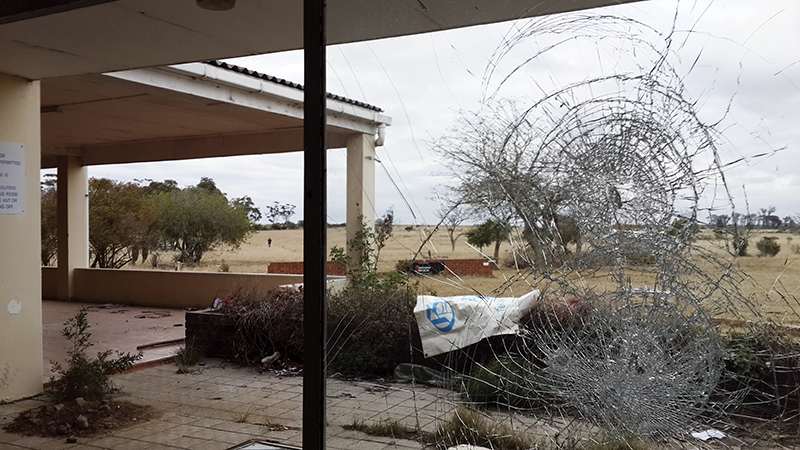 The view across the old Cradock Road golf course through the shattered pane of the one remaining sliding door on to the verandah of the once comfortable, well maintained facility. Photo: Sue Maclennan

Less than two years ago, Saturday markets and steak evenings were among the community events that brought the Grahamstown public to the clubhouse of the former Grahamstown Golf Club. As a base for the town’s golfing community, the clubhouse was a hub of social activity, with weddings and special anniversaries celebrated in a venue that was comfortable and well maintained.

Today, shattered windows, doors, window frames and bathroom and electrical fittings ripped out and sections of roofing disappearing greet visitors. Leather golf bags and clubs lie strewn around the clubhouse of the 125-year-old facility. With a dispute over the management of the old golf club only due to reach the courts in January 2019, and now open to the elements, the facility looks well on its way to being condemned. It came to a halt when investors in the Belmont Development Company accused director David Davies of breaching their agreement, and acting without taking their interests into consideration.

The investors won their 2015 bid to have the company placed under business rescue. Earlier this year, the shareholders, including Davies, agreed to shift the company’s assets to the shell company, LFDGT 2016 (Pty) Ltd.

In November 2016 Davies and others brought an urgent interdict against the business rescue practitioner Neil McHardy and Belmont DC (with Land Affairs as the fourth respondent) to prevent them transferring ownership of Erf 8045 – the old golf club land in the Cradock road.

Selling or transferring the land Davies said, contravened the terms of the business rescue.

It is this grievance that is set down for hearing in the High Court in Grahamstown in January 2019. Meanwhile, no one appears to be willing to take responsibility for securing the old clubhouse and preventing its further deterioration.

Replying to questions from Grocott’s Mail, McHardy said the local representative of the shell company, LFGDT, said pending litigation over the property included an interdict that prevents the current owner from developing the site or making any improvements.

“We had arranged for the site to be occupied but the person on site was robbed and hence is reluctant to continue staying there. We have made alternate security arrangements including armed response,” the company replied via McHardy.

Grocott’s Mail visited the site twice this week at different times and no security in any form was evident. Manager at Hi-Tec security company Andre Wille confirmed that Hi-Tec is not guarding the clubhouse.

“We are the only company that provides an armed response service in Grahamstown. Hi-Tec has not been contracted to provide any service at the old golf club. There is no longer electricity there so they couldn’t anyway,” Wille said. Hi-Tec had been asked to move the alarm system control panel to the new golf club around 18 months ago, he said.

Steve Birt, former Club Captain of the Grahamstown Golf Club – was club captain at the time they moved to the new Belmont Golf Club.

“I don’t know who [the facility]now belongs to. We notifed all members before the move. They came and fetched their property. The golf bags left there are ownerless,” Birt said.

“The club is over 100 years old so those bags could have accumulated over that time. We had 120 members when we left there.”

Grocott’s Mail’s query to McHardy about what armed response was being used were referred to Durban-based lawyer Vasie Chetty and went unanswered.

Daniel Gouws, General Manager Belmont Golf Club, said, “I don’t know too much about the old club or what’s happened there. As far as I know the other company still had an office there but seems to be gone now hence the destruction. The old club moved over with 142 members.”

Meanwhile, vandals and the weather continue to strip the building.

Over a century of history

The move of the Grahamstown Golf Club to the Belmont Golf Club, ended almost 120 years of history which started in 1891.

The golf course, reputed to be the third oldest in the country, started as a 9-hole fairway on the Cradock Road Flats and was was somewhat further from town than the present course.

A second course which opened in 1904 was developed in the vicinity of St Andrew’s Preparatory and the lower part of Hill 60, straddling the railway line.

By the end of 1906 a third course was developed around the Cradock Dam with the 1st tee being near the old West Hill Station at the top end of Constitution Street and a clubhouse above the Cradock Dam on the side of the Settler’s Hospital.

The old club house, destroyed by fire in 1915 and replaced with a wood and iron structure, featured in a famous trial in 1907 relating to the death of nine-year-old Edith Pinnock whose body was found in the cellar.

The clubhouse’s caretaker, Thomas Henry Kerr, was charged and acquitted of the murder.

The move to the Cradock Road site happened in 1932 with the existing clubhouse, which has undergone much renovation over the years, being built in 1933.