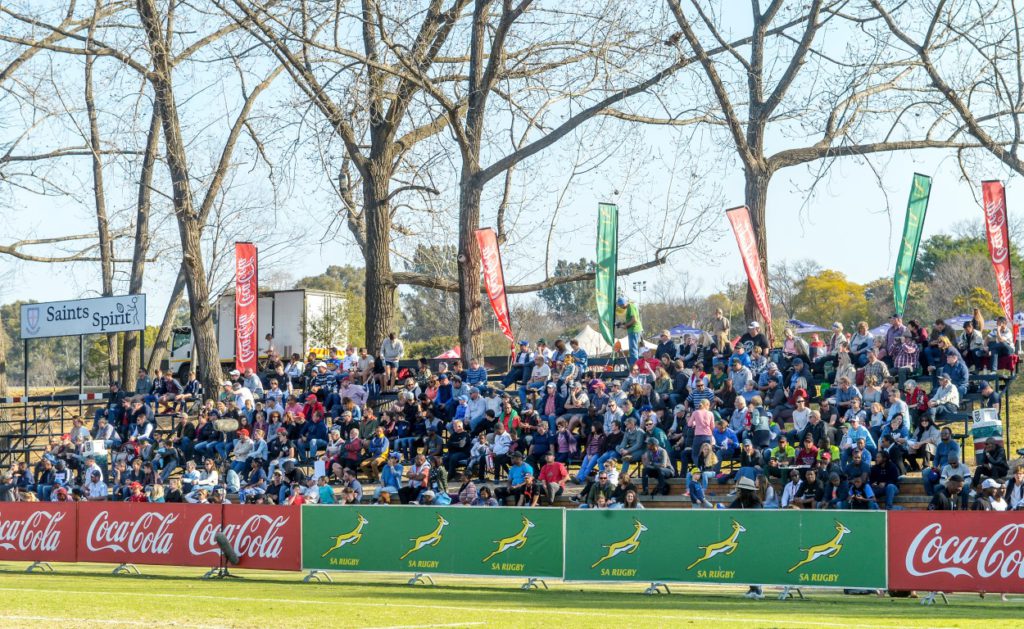 Day 5 of the 2017 U/18 Coca-Cola Craven Week at St Stithians College on July 22. Photo by Sydney Seshibedi/Gallo Images

The Blue Bulls took top honours in the U18 Coca-Cola Academy Week in an exciting finish to the SA Rugby Youth Weeks series at St Stithians College in Johannesburg on Saturday.

The Blue Bulls overcame a hard-fought first half against DHL Western Province for a 49-37 victory and the honours as the top team in the competition. Blue Bulls centre Edmund Ludik played a key role in the team’s performance with his try, four conversions and two penalty goals. The Pretoria side scored seven tries to the Capetonians’ five in a fantastic North-South derby. The victory saw the Blue Bulls finish the tournament unbeaten.

The Leopards solid goal-kicking also secured a 35-34 victory for them against Eastern Province, as the team was outscored six tries to five by the Eastern Cape side. The Potchefstroom team led 21-17 at the break and they added two converted tries in a closely fought second half in which Eastern Province scored 17 points, but their five conversions was enough to seal the victory.

Eastern Province CD and the Pumas were involved in a tight tussle from start to end, with the Eastern Cape side taking a narrow 17-14 halftime lead, while they managed to hang on for a 27-21 victory. Eastern Province CD’s inaccurate goal-kicking – an area the Pumas proved to be strong in – cost them a few points, but fortunately they made better use of their opportunities to outscore the Pumas five tries to three.

The Bidvest Waltons Golden Lions XV ensured that they finished the tournament on a high note in front of their home crowd as they powered their way to a 45-14 victory against SWD thanks to a dominant second half performance. Such was the good quality of their attack and defence they ran in a total of seven tries to two by the George side. However, they were tested thoroughly in the first half, which saw them take a narrow 13-7 lead.

A classy performance by Free State flyhalf Alex-Zander Du Plessis, meanwhile, set up his team for a 38-29 victory against the Sharks, with a personal total of 28 points thanks to his hat-trick, five conversions and penalty goal. The Bloemfontein side led 21-19 at the break, but their accurate goal-kicking handed them the edge on the scoreboard as each side scored five tries in the match.

Border also held their nerve in a tight affair against the Tshepa Trading Griffons to convert their 12-10 halftime lead into a 34-27 victory. Border lock Simbongile Kampi was a star player for his team as he scored three of their five tries, while fullback Sibalomzi Mqeni’s superior goal-kicking thanks to his three conversions and penalty goal, proved to be the difference on the scoreboard as both teams finished the match with five tries.

Six tries by Valke Platteland to five by the Limpopo Blue Bulls earned them a 38-31 victory in an entertaining match. Valke Platteland made their presence felt early on to play their way to a 23-7 lead at the break, and that paved the way for their victory despite a strong second-half fightback by the Limpopo side in which they scored 24 points.

A strong first half showing by GWK Griquas CD in which they built up a 33-12 lead earned them a 59-30 victory against Border CD. In total GWK Griquas CD ran in nine tries to four by Border CD, with centre Valdo Pieters and scrumhalf Charl Olivier each contributing a brace.

The Tshepa Trading Griffons bounced back from trailing 19-12 at the break against Sharks CD to earn a 26-26 draw as both sides scored four tries and converted three in a tight match. Sharks CD winger Jacques Lindeque scored a hat-trick for his team in a fine display, which also earned him the man of the match award.

In another close encounter, hosts, the Bidvest Waltons Golden Lions defeated Boland 26-19 as they scored four tries to the Western Cape sides three. The Johannesburg team snuck 12-7 ahead in the first half and they capitalised on their point-scoring chances as the match continued and slotted over three of their four conversions to seal the victory.

In the Test match, Namibia overturned a 10-5 halftime deficit to defeat Old Mutual Zimbabwe 27-24.  Namibia were solid on attack as they crossed the chalk five times, while they limited their African neighbours to three. But Old Mutual Zimbabwe’s effective goal-kicking which saw them convert all three tries and kick a penalty goal kept them in the match. This, however, was not enough as they fell three points short on the scoreboard.

The Valke and Pumas CD were involved in a gripping match, which saw the Kempton Park side register a close 40-36 victory. Such was the closeness of the match the Valke led 26-24 at the break, and the teams continued to throw everyone at one another as the match progressed, which saw the sides each earn six tries. The Valke’s kicking, however, proved to be the difference on the scoreboard.

GWK Griquas dominated their clash against the SA Learners with Special Education Needs (LSEN) team as they produced a balanced performance to power their way to a 17-0 lead, which they built on for a 22-10 victory. The SA LSEN team tightened up their defence in the second half and stepped up their attack to earn double figures, but these efforts were too little too late.