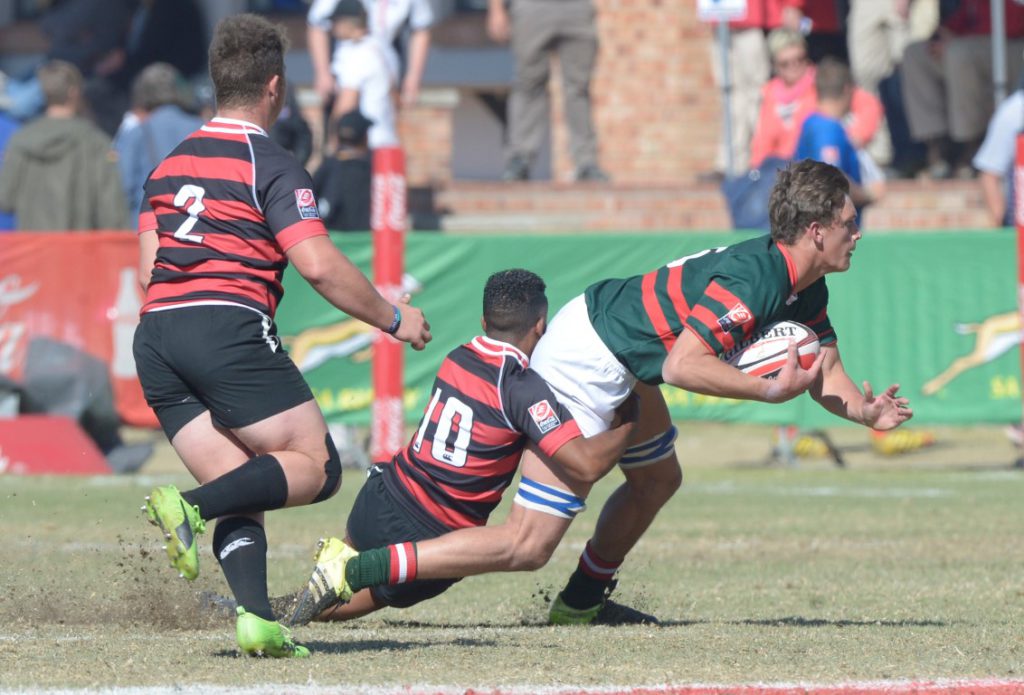 George Van Der Westhuizen of the Leopards with ball possession against Eastern Province during day 5 of the 2017 U18 Coca-Cola Craven Week at St Stithians College on July 22, Photo by Sydney Seshibedi/Gallo Images

The Bidvest Waltons Golden Lions took top honours in the U18 Coca-Cola Craven Week in an exciting finish to the SA Rugby Youth Weeks series at St Stithians College in Johannesburg on Saturday (22 July).

The Bidvest Waltons Golden Lions defeated the Sharks 45-18 in a thrilling final match in the U18 Coca-Cola Craven Week.

In stark contrast to the opening four days play in the tournaments, the other matches proved to be close, which kept fans gripped throughout the day.

A penalty goal proved to be the difference on the scoreboard as Eastern Province held on in a tough encounter against the Leopards for a 29-26 victory. The Eastern Cape side worked their way to an encouraging 15-5 lead at the break, but they faced a determined onslaught from the Leopards in the second half. Both sides scored four tries and kicked three conversions in the match, but the penalty goal by Eastern Province proved vital as it nudged them to victory.

Eastern Province CD ran riot on attack to score 12 tries for a 70-0 victory against Border CD thanks to their effective attack, with hooker Dean Jenkins scoring a hat-trick. They supported this with a solid showing on defence, to deny Border CD from scoring a point.

The Bidvest Waltons Golden Lions got the final match of the U18 Coca-Cola Craven Week off to a strong start as winger Tino Swanepoel navigated his way to the tryline in the ninth minute. But the Sharks hit back soon after with scrumhalf Sanele Nohamba slotting over a penalty goal, which they backed up with two tries in two minutes by Conan Le Fleur and Cham Zondeki respectively. The teams exchanged penalty goals soon after through centre Kennedy Mpeku and Nohamba, which pushed the Sharks 18-11 ahead going into half time.

The hosts bounced back with intent in the second half with flanker Franco Schutte crashing over the tryline two minutes after play resumed and the successful conversion saw them level the scores. Both sides had opportunities in the following minutes, which they were unable to capitalise on. A subsequent penalty goal by Mpeku and back-to-back tries in two minutes by winger David Cary and flanker Mark Snyman, however, earned them a 17-point cushion with 12 minutes left on the clock. This fuelled their motivation as Mpeku inflicted further damage with a penalty, while flanker PJ Jacobs forced his way over the tryline on the stroke of fulltime for a rewarding 45-18 victory.

Free State continued their fine form in the tournament and delivered a solid performance for a 54-33 victory against DHL Western Province. The first half was gripping as the teams exchanged tries throughout the half, with the Free State taking a narrow 29-26 lead. The Bloemfontein side, however, built on their attack as the game progressed, while they tightened up their defence, to earn seven tries to the Cape side’s five. Free State flyhalf Christopher Schreuder, meanwhile, kept the scoreboard ticking with his effective kicking and earned five conversions, two penalty goals and a drop goal for his efforts.

The Blue Bulls also finished the tournament with a victory as they pipped Border 45-40. Blue Bulls centre Marnus Potgieter scored hat-trick, while fullback Diego Appollis earned a brace and flyhalf Ulrich Maritz slotted over five conversions in key performances for the side. In the end an unconverted try was the difference on the scoreboard as the Pretoria side scored seven tries to Border’s six.

SWD overcame a strong challenge from the Pumas for a rewarding 49-36 victory after trailing 17-14 at halftime. The first half was tight as the teams proved to be closely matched in all areas of their game, but the lapses in defence by both sides in the second half saw SWD increase their try tally to seven, while the Mpumalanga side were only able to score five. SWD flyhalf James Mollentze made a valuable contribution to their score as he scored a try and kicked seven conversions for 19 points.

The Valke staged a strong second-half comeback from 17-29 down against Griquas CD to secure a narrow 43-41 victory in a thrilling match. Three Valke players contributed a brace to the team’s seven tries, while Griquas CD’s six tries, four conversions and penalty goal allowed them to remain in the game. Their determined efforts, however, were not enough in the end.

GWK Griquas started their clash with a bang as they ran in three tries in the first 10 minutes for a 21-0 lead, but they faced a tough challenge from the Limpopo Blue Bulls as the match progressed. The Kimberley side won 57-34 in the end as they delivered a constructive performance with their forwards and backs doing their bit on attack to guide the side to nine tries – three of which were scored by hooker Rory Leijdekkers. Limpopo centre Vincent Roos also touched down three times for his team, but the side’s efforts were not enough to outplay GWK Griquas.

In the International, meanwhile, Namibia defeated Old Mutual Zimbabwe 45-21 spurred on by a fantastic performance by Namibian fullback Delron Brandt. The player scored two of the team’s six tries and slotted over six conversions and a penalty goal for 25 points, while they limited the opposition to two first-half tries and one in the second half.

The Tshepa Trading Griffons’ stamped their authority early on against Boland to steer their way to a comprehensive 42-12 victory after taking a 22-0 lead at the break. The Welkom side’s flyhalf Andrew Kota was instrumental in their success as he scored one of the team’s five tries, while he kicked four conversions and three penalty goals for 22 points. The Tshepa Trading Griffons backed up this efficient attacking display with solid defence to limit Boland to two tries for their efforts.