Try festival on penultimate day of U18 Youth Weeks 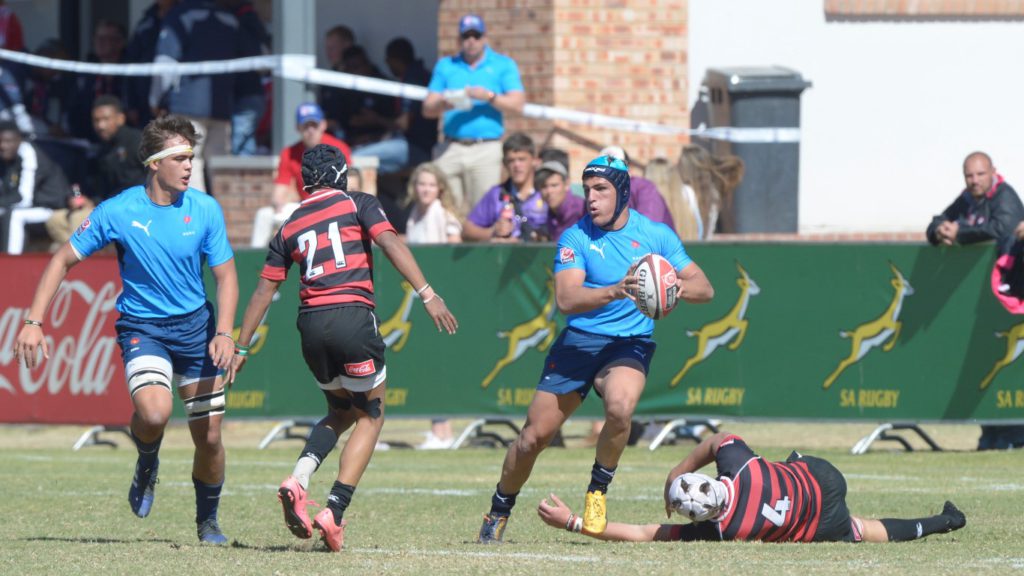 Gustav de Jager of the Blue Bulls against Eastern Province during day 4 of the 2017 U18 Coca-Cola Craven Week at St Stithians College. Photo by Sydney Seshibedi/Gallo Images

The penultimate day of action the U18 Coca-Cola Craven Week tournaments at St Stithians College on Thursday proved to be an attacking festival in an entertaining day’s play.

A total of 112 points and 17 tries were scored in the highest scoring game, while 375 Points were scored over the course of the day in the U18 Coca-Cola Craven Week.

It was also a solid day for African neighbours, Old Mutual Zimbabwe and Namibia, who beat Border CD 64-15 and the Tshepa Trading Griffons CD 31-17 respectively.

These results saw the Sharks, Leopards and GWK Griquas remain unbeaten in the U18 Coca-Cola Craven Week, and SA LSEN and the Blue Bulls in the Coca-Cola Academy Week.

Eastern Province dominated their clash against the Blue Bulls completely to earn a rewarding 37-0 victory. The Eastern Cape side retained possession and attacked at will, which forced the Pretoria side to defend for most of the match, while they were left to feed off the scraps on attack. Eastern Province ran in six tries in total, with No 6 Bevan Prinsloo scoring two of their tries.

Eastern Province CD’s ability to convert their chances into points – an area that lacked in Old Mutual Zimbabwe’s game – handed them an edge for their 34-14 victory and their first win in the tournament. The teams were well balanced in all areas of their game apart from their finishing, but despite this the Eastern Cape side took an encouraging 24-7 lead and they built on this after the break, while they leaked only two tries Namibian centre Mazvitaishe Nyamarebvu.

The Sharks’ forwards laid a solid foundation for their team to attack against SWD, and they backed this up with good pressure and fantastic support play to earn a 65-26 victory. The KwaZulu-Natal side ran with intent on attack and they managed to navigate their way through the gaps in the defence with ease to cross the chalk six times in the first half for a 38-12 halftime lead. SWD hit back immediately after the break with a try and they added another in the dying minutes, but the Sharks’ four second-half tries saw them cruise to victory. Sharks prop Thabiso Mdletshe and No 8 Phendulani Buthelezi were each rewarded with two tries for their efforts in the clash.

The Leopards were in control of their clash against Namibia from start to end as they dominated territory and possession and used most of their try-scoring chances to register a 57-30 victory. Such was the Leopards’ dominance, they powered their way to a 28-8 lead at the break. Namibia fought back strongly in the second half and it paid off as they earned five tries in the match. This, however, was not enough to stop the Leopards from scoring, and they finished the match with eight tries, two of which were scored by flyhalf Hanru van Rooyen, who also slotted over seven penalty goals and  drop goal.

An astounding 112 points were scored in the clash between GWK Griquas and the Valke, with the Kimberley side registering a narrow 60-52 victory. The GWK Griquas scored nine tries and the Valke eight in an entertaining attacking display. Valke scrumhalf Leshley October and flyhalf Ruben Beytell each scored a hat-trick, while GWK Griquas flyhalf Charles Williams proved to be a standout player for his side thanks to his two tries, six conversions and penalty goal.

All teams will have Friday off to rest after four days of physically-demanding clashes and will return to the field on Saturday for the final round of matches.