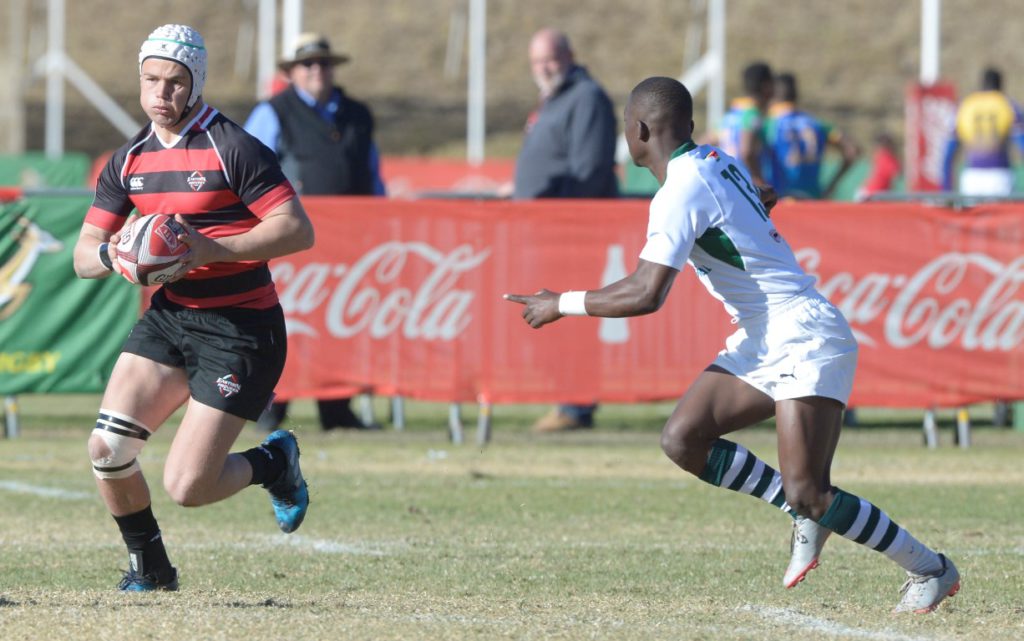 The penultimate day of action the U18 Coca-Cola Academy Week tournament at St Stithians College on Thursday proved to be an attacking festival in an entertaining day’s play.

A total 453 points were scored in the Coca-Cola Academy Week.

It was a good day for the hosts, as the Bidvest Waltons Golden Lions beat the Free State 48-38 and the Bidvest Waltons Golden Lions XV defeated Border 31-8, while the SA (Learners with Special Education Needs) team worked their way to a 43-31 win against Valke Platteland and the Leopards beat Pumas CD 33-17 and the Blue Bulls overpowered the Pumas 46-31.

The Blue Bulls used their ability to score from broken play to work their way to a 46-31 victory against the Pumas. The Pretoria side powered their way to a 31-14 lead in the first half thanks to their effectiveness on attack, and they continued to make their presence felt in the second half. Replacement back Edmund Ludick played a key role in the team’s success as he scored two tries, four conversions and one penalty goal for a personal total of 21 points.

Hosts, the Bidvest Waltons Golden Lions, earned the rewards for their effective rounding off as they overcame a big battle up front against the Free State for a 48-38 win. A try, five conversions and a penalty goal by the hosts’ centre Jeremy Randall and two tries by lock Jordan Mbuyamba steered the side to victory as they outscored the Free State seven tries to six, while their superior goal-kicking handed them a cushion on the scoreboard.

Namibia’s balanced second-half showing earned them a 31-17 victory against the Tshepa Trading Griffons after a tight first half in which Namibia took a narrow 14-12 lead. Namibian centre Morgan Esterhuizen scored a brace, with the team touching down five times in the match, while they limited the Welkom side to adding only one try after the break to add to their two in the first half.

Old Mutual Zimbabwe ran riot on attack against Border CD to cross the chalk 10 times in a one-sided display, in which the Eastern Cape side’s defence cost them dearly. Three players in the Old Mutual Zimbabwe side scored twice, while fullback Tanie Roelofsz scored a try and slotted over seven conversions for 19 points.

The Leopards found their rhythm in the second half against Pumas CD to secure a 33-17 victory thanks to their four tries by two the opposition. The first half was closely fought with the Leopards taking a narrow 14-10 lead. They supported this with a solid performance after the break in which they capitalised on their try-scoring chances, while their solid defence limited Pumas CD to only a converted try.

A hat-trick by the SA Learners with Special Education Needs (LSEN) team’s centre Stanley Fry and a star performance by fullback Shilton van Wyk who scored two tries and three conversions, meanwhile, paved the way for their 43-31 victory against Valke Platteland. In a tight first half the SA LSEN team took a narrow 19-12 lead, but they did well to capitalise on their try-scoring chances after the break to increase their try tally to seven, while the Valke Platteland only scored five tries.

The Bidvest Waltons Golden Lions XV, meanwhile, wore down Border with their hard running and patience on attack, and this paid off with a satisfying 31-8 win. The home team’s centre Juandre Breytenbach scored two of the team’s five tries as they controlled proceedings and shut down the Eastern Cape side’s efforts on attack.

All teams will have Friday off to rest after four days of physically-demanding clashes and will return to the field on Saturday for the final round of matches.