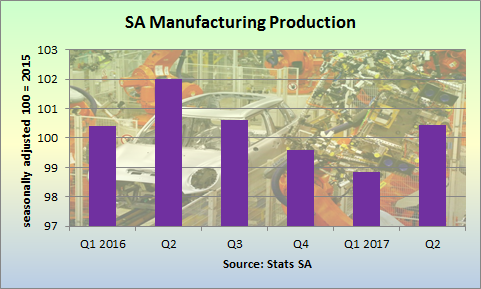 After three consecutive quarters in which manufacturing production acted as a drag on gross domestic product (GDP) growth, the May 2017 data released by Statistics South Africa (Stats SA) showed that a recovery was under way in the second quarter.

Economists have been worried that manufacturing production would continue to disappoint and on a year ago basis, manufacturing production is down 1.6% in the first five months of 2017. In South Africa however we follow the American and European practice of focusing on the quarterly change, rather than the year ago change, which is used by most African and Asian countries. Stats SA reports both measures, but the media focus is on the quarterly change, as that is what equity dealers, who are schooled in American valuation methodology, look at. On the quarterly change front, the average of the second quarter so far is that manufacturing production grew by 6.7% on a seasonally adjusted annualised rate (saar) after contracting by 3.0% in the first quarter. The June data must still be released and there could be revisions to the April and May data, so the 6.7% increase for the second quarter is not cast in stone. The manufacturing purchasing managers index (PMI) survey indicated a drop in June compared with May, but there is no one-to-one relationship between the PMI and the Stats SA manufacturing data. For instance, the April PMI showed a sharp monthly drop after the late March cabinet reshuffle, while the Stats SA April manufacturing data reflected a strong monthly increase.

The June manufacturing production data will be released on 10 August and the second quarter GDP data on 5 September.

Previous ArticlePolicy uncertainty rose in the second quarter, but still below Nenegate
Next Article Tractor sales jump by 24% y/y in June