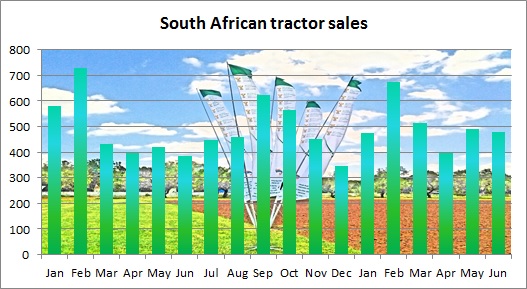 After eight consecutive quarters in which agriculture acted as a drag on gross domestic product (GDP) growth, the first quarter 2017 recovery with a strong 22.2% quarterly increase on a seasonally adjusted annualised rate (saar) basis was very welcome. The June 24% year-on-year (y/y) jump in tractor sales to 479 units shows that the growth contribution remains on track in the second quarter.

Farmers started harvesting this year’s record maize crop in May and during June they got a better estimate of what to expect in terms of revenue. This allows them to make informed buying decisions and the June 24.4% y/y jump follows the 16.8% y/y May increase after last year’s 11.3% fall when drought conditions prevailed. The June jump also probably means that farmers can satisfy some pent-up demand as they had to defer purchases last year due to the poor rainfall. They can now buy other farming equipment and make repairs which they could not afford to do last year. This should spill over into other industries such as the chemical and seed industries.