Policy uncertainty rose in the second quarter, but still below Nenegate 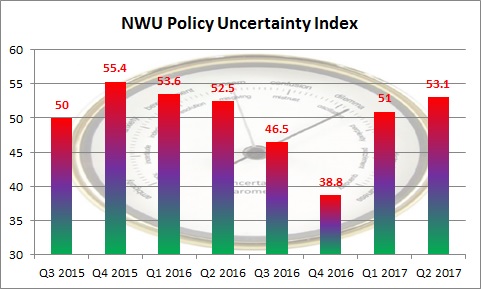 Although policy uncertainty rose in the second quarter after the late March cabinet reshuffle compared with the first quarter, it still remained below the level of the fourth quarter 2015 when President Jacob Zuma fired one Finance Minister, then another one a few days later, so then we had three different Finance Ministers in only four days.

The school constructs a Policy Uncertainty Index (PUI) on a quarterly basis by looking at how often the media mention uncertainty, polling economists’ as to their views on uncertainty and using the Bureau for Economic Research at the University of Stellenbosch survey of manufacturers’ views on political/policy constraints.

In the second quarter 2017 there was a significant increase in media reporting about ‘policy uncertainty’, while the survey of the economists found heightened perceptions of ‘uncertainty’ and the proportion of manufacturers who indicated that politics is a constraint on doing business in South Africa increased from 76%  to 87%.

The PUI is not just some interesting academic toy, as research has shown that there are correlations between a policy uncertainty index and economic activity. Empirically it has been shown in several studies that when economic policy uncertainty is strongly present in an environment, it lowers investment, employment and output as executives adopt a ‘wait and see’ attitude and delay making investment decisions. Economic policy uncertainty then has actual consequences for the economy, which is why universities undertake surveys of business and consumer confidence.

“’Two successive quarters of negative economic growth mean that South Africa experienced a ‘technical recession’ in the six months’ period October 2016 to March 2017 and is officially in recession. While this development may have come as a shock to many observers, it was presaged in the Policy Uncertainty Index (PUI) for the first quarter 2017 released in April,” Parsons said.

when economic policy uncertainty is strongly present in an environment, it lowers investment, employment and output as executives adopt a ‘wait and see’ attitude and delay making investment decisions

The school said that seen as a whole, the global economic outlook remains supportive of the South African economy in the second quarter, which augurs well for those sectors which are dependent on favourable international economic trends such as mining and manufacturing.

“Under normal circumstances any country should be able to have a sensible technical discussion on a policy matter such as inflation targeting and its future. But it is perhaps a reflection of the low levels of trust and confidence in South Africa at present that the motives and intentions of such a suggestion should elicit much unease and future uncertainty,” the school said. “The fact remains that even a fluid and uncertain economic situation provides not only risks but opportunities. Uncertainty does not automatically mean negativity. While for the time being policy uncertainty may have become the ‘new normal’, business strategies can be adapted to accommodate the situation. Adapting to policy environment ‘shocks’ is a capability all businesses have to develop in order to survive, as there is always scope for remedial action,” the school concluded.

Previous ArticleCoca-Cola U13, U16 results
Next Article May data confirms manufacturing recovery