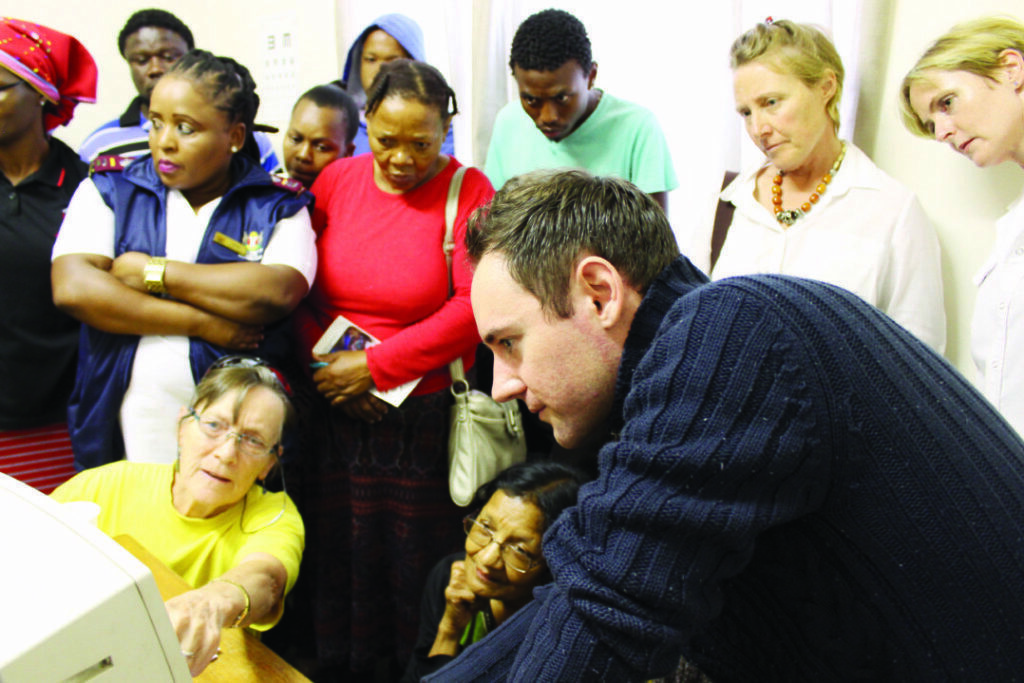 “There may be many things our town can be criticised for,” Grahamstown Business Forum chairperson Richard Gaybba said. “But one of the things Makana has that is of an excellent standard is eye care.”

Gaybba was the guest speaker at the official opening of the new eye care clinic in Joza this week.

The Clinic which will be open every weekday morning until 1pm, and 9am-5pm on Mondays and Wednesdays, is in the Joza Youth Hub, on the corner of Ncame and Nompondo streets.

Equipped with specialised diagnostic equipment, the clinic – a partnership between Dr Davies Optometrists, Settlers Day Clinic, the Joza Youth Hub and the Raphael Centre – will focus on diabetic eye screening.

Diabetic patients – either referred or walk-ins – will have their visual clarity checked and a special photograph taken of their eye. This is reviewed by an optometrist and referred either to the Port Elizabeth surgical team, St John’s Eye Clinic, or Dr Davies Optometrists.

The launch of the eye clinic on Monday 10 April means a partnership envisioned some months ago, to provide a youth-friendly environment for key clinical services, is now fully up and running.

The HIV Counselling and testing component, managed by the Raphael Centre, has been in place for around six months.

“First, we provide HIV Counselling and Testing (HCT). This has worked well because the local school youth are able to access us for testing.

“We work in schools in the township where we offer our Khanya Be SMART programme. This involves initiating discussions with school youth around issues relating to HIV, relationships, self esteem and so on.

“We invite all youth to test for HIV at the Youth Hub – because they have complained that our office is too far.

“The reason we focus on youth is because youth comprise one of the high risk groups for HIV as defined by the International AIDS Society.”

“We work with Dr Davies to provide retinal scans and basic visual tests because we have a greater reach into the community.  When people come for an eye test, we encourage them to test for HIV. Many people want their eyes tested, so this helps us to test more people for HIV.”

Humphreys said there had recently been a shift in the way youth living with HIV are managed in Grahamstown, in particular making services youth friendly and safer in terms of stigma.

“Many youth struggle with adherence,” Humphreys said. “This is also true of diabetic youth. The clinic will refer youth to us for adherence and HIV related counselling as necessary.”

Along with diabetes, the eye-testing machine also picks up other eye related illness, for example those linked with HIV and Aids, Humphreys said.

According to the World Health Organization, an estimated seven million people worldwide go blind each year.

“Sadly, 80% of all these cases could have been avoided,” Oosthuizen said.

She explained the effects of diabetes on the eye.

“Alterations in the retinal blood flow are caused by the systemic condition, diabetes mellitus which, if left untreated, can cause blindness.”

Quoting WHO, Oosthuizen said diabetic retinopathy was among the top five causes of blindness worldwide, the number one cause being cataracts.

“Grahamstown has quite a success story regarding cataract management,” she said.

Patients with cataracts are put on a list at the St John’s clinic and every two or three months, a team of opthalmologists from Port Elizabeth spends a week in Grahamstown, doing around 40 cataract operations.

“We are hoping to implement the same attitude and inter-professional care towards diabetic retinopathy management,” Oosthuizen said.

“The aim of the programme is to identify patients who would not otherwise have access to health- and eye care.”

Vision, or its absence, directly affects the quality and length of healthy ageing, Oosthuizen said.

“Because many patients with sight-threatening disease do not present with symptoms, continuous and reliable evaluations is a valuable strategy in decreasing the burden on the population and the medical care systems.”

Sister Thozama Nakase, who is in charge of eye screening at Settlers Hospital Outpatients Department, said the programme would be extremely helpful.

“We do 10-15 eye screenings a day, and because we don’t have specialised equipment, we often have to refer even simple cases to Port Elizabeth.

“Now if someone comes with a problem that is out of our screening ambit, we can refer them here.”

Oosthuizen said the diabetic screening was also capable of picking up a range of other problems.

“What is particular about diabetic screening is that it needs a lot of follow-up visits.”

Saying that the Port Elizabeth optometrists perform the highest number of cataract operation in South Africa, Manager at St John Ambulance Mario Viljoen said for every 250 patients diagnosed with cataracts, 305 were referred for other problems.

“This clinic should help streamline that process,” Viljoen said.

Jan-Louis Fourie, of The Eye Store, said the cataract clinic operated extremely efficiently and the diabetic retinopathy screening and referral process would be structured in the same way.

“The key to diabetes is catching it as early as possible,” Fourie said.

He said the clinic would help make referrals as specific as possible.

Gaybba spoke of the importance of building public-private partnerships to provide services and facilities.

“Businesses traditionally have a donor relationship with organisations,” Gaybba said. “But to give time, effort and

Care is much more difficult.

“We need to build monuments of love and care,” Gaybba said.

Previous Article25 Ultras? I barely survived the half…
Next Article Big poaching bust in Port Alfred