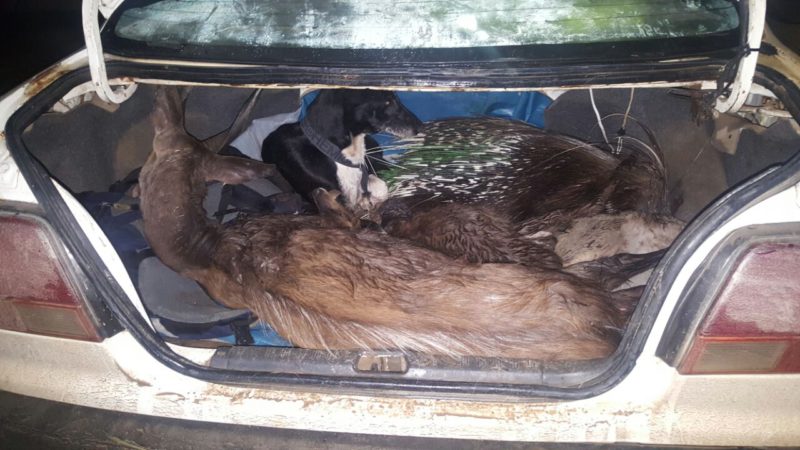 Strange noises coming from a backpack in the car of a man caught speeding led an alert police officer to a two live animals and five dead ones being transported in the boot of a car passing through Port Alfred this morning.

When Neethling pulled the vehicle over on the Nico Malan bridge, the driver said he had been speeding because he was late for work.

“On searching the vehicle, the member found carcasses of two bushbuck, one grey duiker and one  porcupine, with a live dog in the boot,” Govender said.

“He heard strange sounds coming from a backpack in the boot. On searching the bag he found a dead spring hare and a live grey duiker. In the vehicle he also found a spear and two knives, all blood-stained, a spotlight with a large battery and two ropes behind the driver’s seat.”

Three men aged 57, 30 and 26 were arrested. They face charges of Illegal Hunting or Possession of Endangered Wild Animals and eight additional counts, Govender said. She said the total value of the animals is R18 000.

“The driver was also issued with two warnings by an Inspector from the local SPCA for transporting a live dog in the boot and for allowing the duiker to suffer.”

The duiker had to be euthanised by the SPCA.