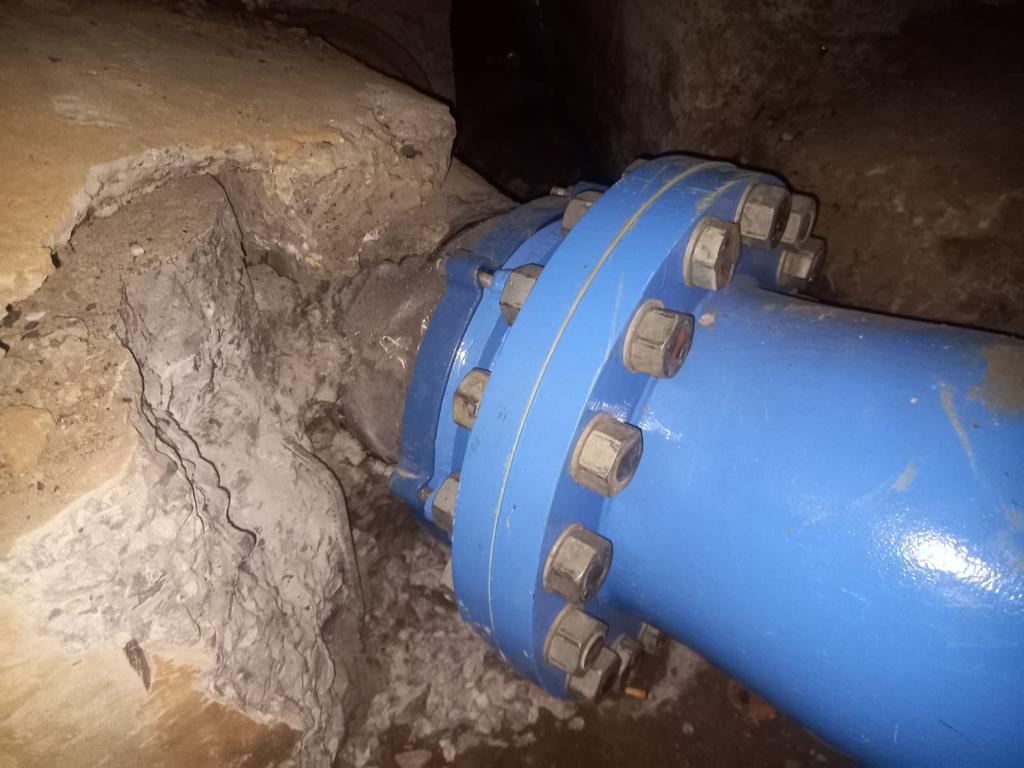 Makhanda was plunged into a worsening water crisis this week as new leaks and challenges sprung up around the city.

Another major burst pipe on Tuesday, 1 November, this time on the transfer line at Valley Road, Vergenoeg, according to Makana Municipality Communications officer Anele Mjekula.

Only the western side reservoirs and Tantyi reservoir could be opened on Wednesday, a precious ‘on day’.

The Botha’s Hill reservoirs had to be closed to allow the pipeline to drain to detect the problem. However, the repairs were done on Wednesday as the municipal water team isolated the faulty part, allowing for the reopening of Botha’s Hill to the city’s eastern side.

Meanwhile, after two months of effort, repairs were finally completed on Wednesday to the rising main leak between Howieson’s Poort Dam and the Waainek Water Treatment Works. However, as the pumping to Waainek resumed, a new leak was detected on the Howieson’s Poort Dam.

The water team assessed the extent of the damage on Thursday, again bringing the water transfer to Waainek to a halt.

To make matter worse, a leak was also detected on the air release valve at the Waainek high level reservoir, which meant that the treatment of water already in the leidams had to be stopped.

On Wednesday, water tanks had to be deployed to Joza and coloured areas, Hillsview, part of Oatlands North, and part of Rhodes University. However, the water supply to Rhodes and Hillview was opened on Thursday.

An offer of help from Amatola Water

Meanwhile, during a three-hour parliamentary session on Makhanda’s water crisis convened by the Department of Cooperative Governance and Traditional Affairs (COGTA) on Tuesday, Amatola Board Chairperson Pam Yako offered to send a unit of water technicians to help Makana’s beleaguered team sort out the supply problems at Howieson’s Poort and Waainek.

Yako suggested Amathole meet Makana’s technical team to assess the needs and deploy urgent support. At the time of writing, it was unclear whether a date had been set for this engagement.

In an urgent appeal to the Department of Cooperative Governance and Traditional Affairs (COGTA), which held a special three-hour parliamentary session on Makhanda’s water crisis on Tuesday, Ward 8 councillor Cary Clark said water tanks urgently needed to be rolled out to all impoverished households in the city.

“Is it not possible to get an engineering company to assist? We also do not have enough water trucks to cart water around to all affected areas. Please advise what intervention COGTA is planning as we are in crisis?” Clark asked.

“The current situation is one day on and two days off, but in reality, this does not happen as the one day is actually much less. This on/off causes immense pressure on old infrastructure. We are continuously experiencing significant leaks, which need specialists and equipment we don’t have in stores. The result is that people can be without water for many days.

“Add load shedding where pumps cannot work and constant power outages as a result of no maintenance and vandalism of infrastructure; then you have a catastrophe on your hands. Businesses are closing, and people are moving out. The situation is untenable and needs urgent and immediate intervention,” she said.

The latest significant disruptions to Makhanda’s precarious water supply began on 9 September after leaks were detected on the rising main pipe linking Howieson’s Poort Dam to the Waainek Water Treatment Works on the western side of town.

The standard western supply of eight megalitres a day halted abruptly, cutting Makhanda’s water supply in half. About ten megalitres a day are usually supplied from the James Kleyhans Water Treatment Works on the city’s eastern side.

According to municipal statements, repairs to the Howieson’s-Waainek rising line were completed twice in September and three times in October.

Representatives from the Makana Residents Association (MRA) and others have been tracking the progress of the Gqeberha contractor Broadstroke Manufacturing who were appointed to fix the pipeline.

According to Ward 4 Democratic Alliance councillor Geoff Embling, an engineer from a local business stated that the job required between one and one-and-a-half metric tons of concrete to create a thrust block – not the few ‘wheelbarrow-fulls’ that are currently there.

“Other potential issues noted were a faulty gasket and alleged misaligned torque on the bolts,” Embling said.

The agenda of a recent council portfolio meeting showed that Broadstroke Manufacturing was paid R97 207 in ‘irregular expenditure’ for the month ending September 2022.

“It will be interesting to see what was paid in October when most of the work was done, albeit unsuccessfully,” Embling commented.

Makana Municipality Communications reported on Wednesday that the work has now been completed, but it remains to be seen if it holds up.

Embling said that the initial leak on the N2, below the Stone Crescent Hotel, had been worked on “time and time again over a month and a half”.

Previous ArticleHow to reach acceptance in different areas of your life 
Next Article Get out and run and/or ride to the sea!