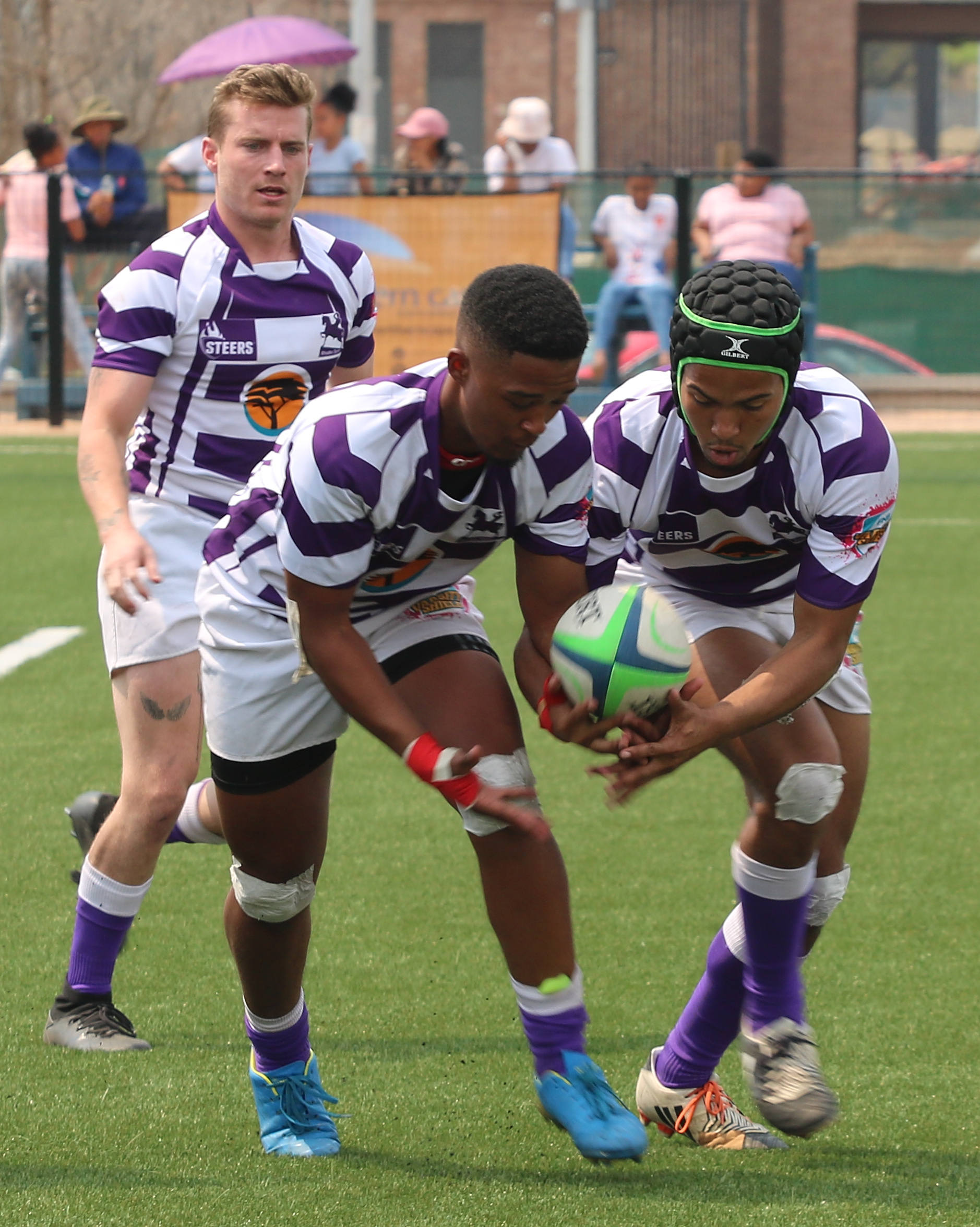 Two Mustangs help each other out. Photo: Ovayo Milisa Novukela

The Rhodes University Mustangs (Men) and Phoenixes (Women) teams went to Kimberly this past weekend to compete in the University Sports South Africa Sevens Championship, hosted by Sol Plaatje University. It was the first time that both genders competed in the competition on the same weekend – 22 teams in the men’s section and 20 universities in the women’s.

The Mustangs were confident heading to the tournament with fantastic practice matches against The University of Fort Hare and Brumbies.

Their first match was against the hosts, Sol Plaatje University. The Mustangs started like a house on fire as they moved the ball quickly, creating gaps. The Mustangs were handed an enormous advantage when one of the Sol Plaatje played was red-carded for dangerous play against Jano Roux.

But the benefit was squandered when they made careless mistakes that cost them dearly, resulting in a narrow win for Sol Plaatje.

The Mustangs’ second game against the University of Limpopo was much better as they brought more intensity, pressed and shifted, giving them plenty of opportunity and space to score many tries. Man of the Match was Tatenda Kadengwa, whose incredible speed caused many problems for the Limpopo side.

The third and final game of the day was against the Sol Plaatje Invitation team. The Mustangs knew they had to win to be second in their group, which they did in spectacular style. They showed their dominance in transitional play with some beautiful skills, especially from the duo of Jano Roux and Simamkele Ngantweni, ensuring a quarter-final place.

Mustangs manager Simelela Mbanzi praised his charges. “We let the first match slip out of our hands, but the boys made sure that they recovered well and won the remaining games,” Mbanzi said.

The Rhodes Phoenixes competed for the first time in a formal competition. They started slowly against the University of Cape Town, but in the second half, they showed why they were called the Phoenixes as they rose to the occasion to score three quick tries. Women of the Match was Puseletso Magakwe, who created gaps and opportunities for her team.

The Phoenixes suffered a heavy loss in their second game against North-West University, who moved the ball more quickly and skillfully.

The final game was against Botswana Tertiary Student Sports Association (Botessa), who started on a high note by scoring three quick tries in the first half. But the Phoenixes rose from the ashes again in the second half, enjoying better ball possession and moving the ball faster. Sadly, it was too little too late as they lost the game.

The Mustangs began the day with a big task in the quarter-finals of Pool B against the Sol Plaatje University Invitational team.

But, it was an all-Mustang show. They were precise, clinical, and in sync with each other – beautiful rugby to witness. Tatenda Kandengwa was as dangerous as ever; his speed and power were too much for the hosts. Jano Roux also showed some exceptional skills to help book The Mustangs a place in the semi-finals of Pool B.

The semi-final was a blockbuster Eastern Cape derby against Walter Sisulu University B, which produced passion, desire, determination, and emotion from both sides. The game shifted when scrum-half veteran Nic Dettmer and captain Liam Agnew succumbed to injuries, contributing to a narrow loss to WSU B. You could see in the boys’ eyes that they wanted the win and were gutted with the result.

The boys wanted to end the tournament on a high for 3rd-4th place play-offs, and the Mustangs showed Botessa why they had been favourites to win the tournament despite a nervous start. They were defending well, clinical when they had the ball, and used scoring opportunities, resulting in a dominant win.

Mustangs coach Unathi Kongwana was proud. “It was a tough tournament, but the boys showed up with one objective: to win. That was not the case, but I am so proud of how they represented the team and the institution, and I believe the boys will leave Kimberly very happy with their performance,” Kongwana said.

The Phoenixes’ first game was against hosts Sol Plaatje University. The Rhodes women were faster and kept possession for most of the match, resulting in an upset victory. Woman of the Match Anam Nqweniso was quick and created scoring opportunities.

The last game was a rematch with the University of Cape Town – and it was even more intense and thrilling this time. A converted try by Sinehlombe Magqaza sealed a second victory for the Phoenixes.