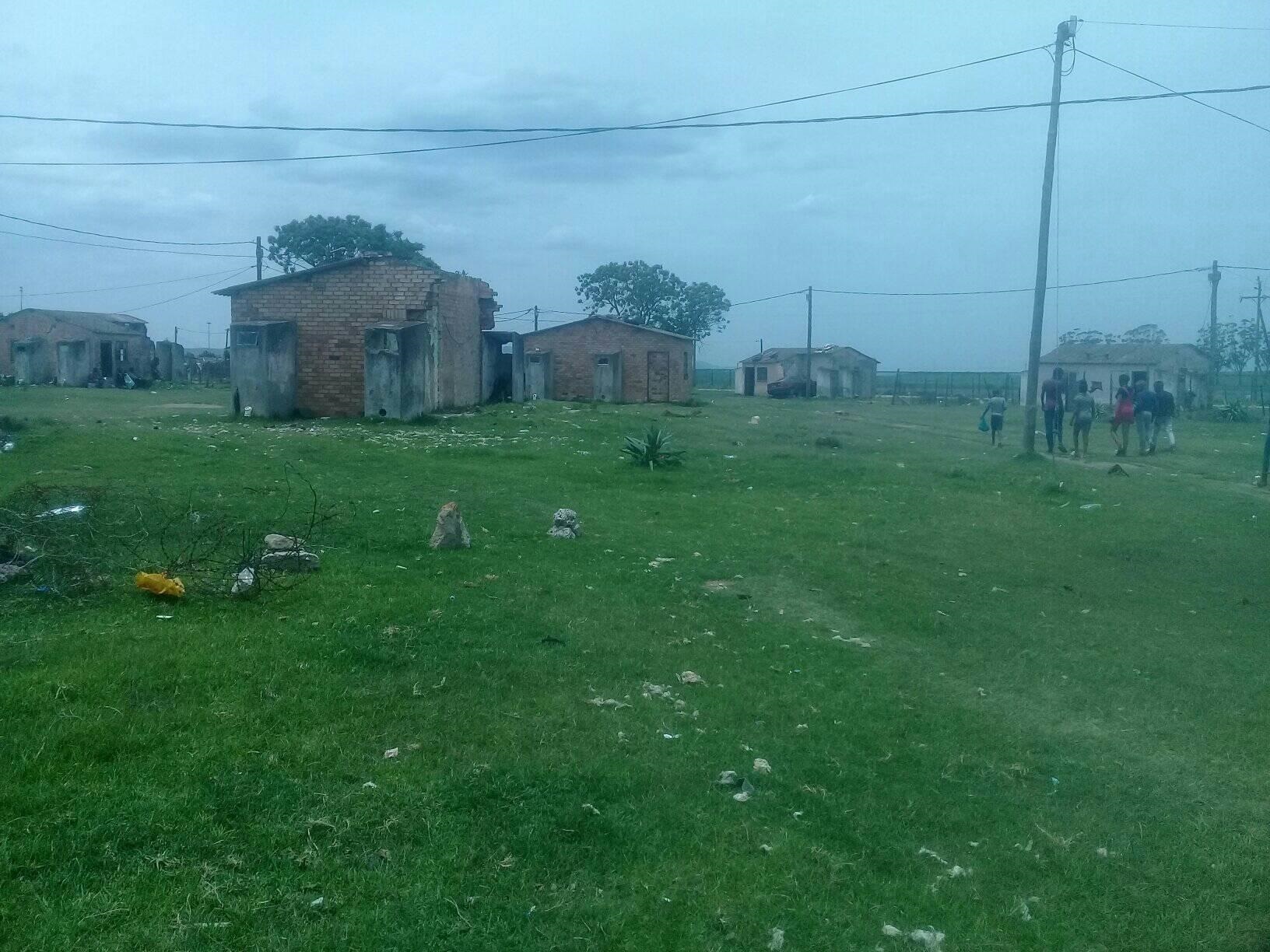 Residents say they occupied the half-demolished houses in Emaxhekwazini since they had no alternative place to live. Photo: Loyiso Dyongman

Emaxhekwazini residents who occupy a settlement of condemned and dilapidated two-roomed houses in Joza say they have given up on getting RDP houses or being moved into any of the new informal settlements.

The houses, opposite Nombulelo Secondary School and between Sani and Ncame Streets, were built by the Bantu Affairs Administration Board in the Apartheid era to house elderly people. In the early 2000s, old residents who were fit enough were moved to RDP houses in Vukani. Others were relocated to nursing homes, like Age in Action in Extension 4 and the Ethembeni Service Centre.

Desperate families – some waiting for their own RDP houses – started trickling in to replace the old residents.

To prevent this, the municipality partially demolished the vacant houses between 2002-2006.

This left the houses in an abysmal state but did not deter people from continuing to move into them.

Residents said the walls were severely cracked and leaking when it rains, leaving the houses damp and mouldy. The area is filthy.

Up to six people – often several families – live in each two-bedroomed house, and everyone in the area shares one communal water tap. The houses are scattered across a small plot about five minutes walk from the municipal housing department.

Several hundred people, including children, are living in this dilapidated settlement.

Speaking to Grocott’s Mail on Monday, 15 August, residents voiced their dissatisfaction with the Makana Municipality. They said they have given up now as the municipality has long been aware of their plight.

Residents say it is strange that this small, poor settlement, situated so near the municipal housing department, is ignored by officials.

Thembela Antoni, 40, said she has lived in Emaxhekwazini with her husband and their eight-year-old child for 12 years. “A family was moving out of this house, and we approached them since we had no place to stay. At my husband’s home in Tantyi, there was no space to accommodate all of us. We have settled well here even though the conditions are not good, especially for children,” Antoni said.

Nombasa Futha, 56, said in each property, all residents share a broken toilet. “They are not in a condition to be used as they are very, very old,” said Futha.

The roofs of the houses are made of crumbling asbestos. Asbestos was formerly used as insulation in buildings but is now outlawed because fibres can cause severe and even fatal lung disease. The treatment or removal of asbestos is strictly regulated by the Asbestos Abatement Regulations 2020. It is supposed to be closely monitored by the Department of Employment and Labour in accordance with the Occupational Health and Safety Act (Act 85 of 1993). Property owners were given until July 2022 to comply.

The residents said they occupied the houses since we had no alternative place to live. Some said they were aware of the dangers of old asbestos to their health but had no option but to settle there.

Zola Adam, who has lived there for more than 15 years, said he had no other place to go. “I don’t know where I would go from here as my parents died long ago, and their house is a family home to their grandchildren.”

Another resident, Mandilakhe Mzizi, who lives with his wife and two children, said he had applied for an RDP house. “But unfortunately, I don’t get it. This place is not good at all. It is dirty, and sewage sometimes overflows. But what can we do? We don’t have a choice,” said Mzizi.

In 2020, Ward 2 councillor Ramie Xonxa confirmed that the roofs were made of asbestos. He said nothing had been done about that because no one was supposed to live there. “The residents there know that they are there illegally,” said Xonxa at that time.

Also, in 2020, former Makana Municipality Executive Mayor Mzukisi Mpahlwa acknowledged the houses were dilapidated and in bad condition. He did not answer questions about what was being done about the buildings and the people living in them.