City unable to cope with rise in housing needs 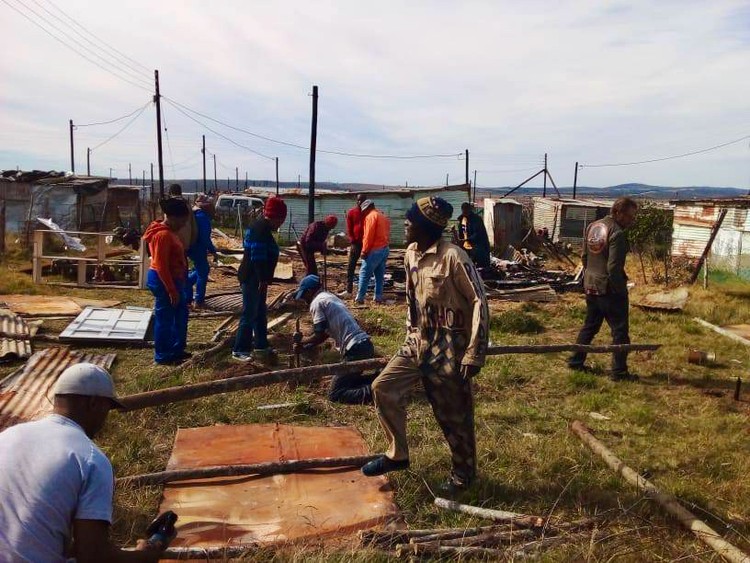 People erect shacks on Wednesday in Extension 7, Makhanda. Since 2020, over 600 households have built shacks here. The Eastern Cape government says the Makana Municipality has no capacity to provide the bulk infrastructure necessary for formal housing developments. Photos: Loyiso Dyongman

The Makana Municipality cannot currently provide the infrastructure needed for housing projects, according to Yanga Funani, spokesperson for the Eastern Cape MEC for Human Settlements, in reply to a question about the lack of RDP housing projects in the city.

Lacking the capacity to provide more formal housing, the government has instead started a process of ‘upgrading’ informal settlements in Makhanda, such as the electrification and provision of communal water taps in the eNkanini informal settlement. Here some people have built homes of bricks and mortar themselves.

People in Extension 7 eagerly await their turn for an upgrade, but no timelines have been given.

According to Funani, consultants were appointed on 4 August to assess and upgrade the municipality’s informal settlements.

Lusizo Buwa, a pensioner living in Extension 7, said she had given up hope of having her own RDP house one day. But she does welcome the idea of ‘formalising’ the area by providing taps and electricity to homes.

“I came here because I no longer want to cut my old age pension in half by paying rent to a landlord,” she said.

Buwa is among over 600 households who have occupied municipal land in Extension 7 since 2020. Residents said they want the municipality to promise in writing that they will get electricity and water.

“We were living like animals in this place,” said Nomawethu Solomons, who moved to Extension 7 in February 2021. She shares a shack with her husband and their seven-year-old son. They are now both unemployed and depend on their child’s social grant.

Municipal spokespeople Yoliswa Ramlolo did not respond to our questions.

However, a source within the municipality said there are no formal housing projects in the pipeline. The last one was in Extension 10, many years ago.

This article was first published by GroundUp.co.za