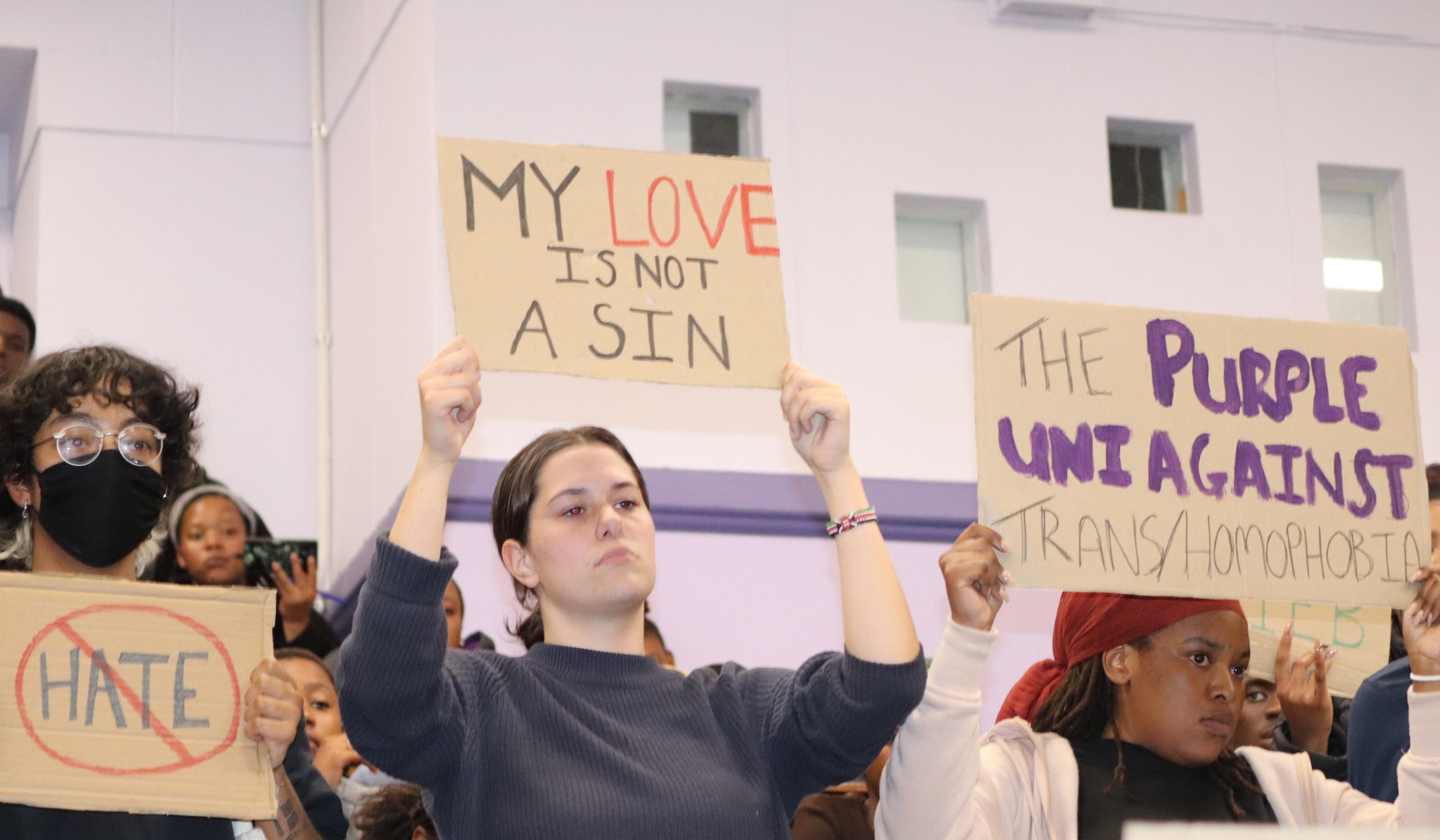 Rhodes University students protest for the disqualification of SRC presidential candidate Arthur Vamva over his homophobic comments on social media during an election ’grazzle’ at the General Lecture Theatre on 2 August. This week's SRC elections were nullified over the ineligibility of five SRC candidates who are on academic probation. Photo: Siyamthanda Pongco

SRC student development and support officer Eric Ofei said five candidates were on academic probation, which disqualified them from running for office.

That they were allowed to stand for election was “just a clerical error”, Ofei said. The error came to light after the nominations closed. “If it had been picked up before, they wouldn’t have been able to run,” he added.

Late Thursday afternoon, the university’s Independent Electoral Board (IEB), an independent body responsible for the oversight of the SRC elections, informed Vice-Chancellor Dr Sizwe Mabizela of serious irregularities in the election process.

In an urgent communique to the student body on Thursday, the Rhodes Communication Division confirmed that some candidates “did not meet the criteria to stand for elections as specified in the Rhodes University IEB Election Policy”.

The procedural problems follow protests against homophobic, transphobic and misogynistic comments made on social media by one of the SRC presidential candidates in the run-up to the elections.

Protestors objected strenuously to Arthur Vamva’s candidacy, calling on the IEB and the SRC’s Student Defence Council to lay charges against him for hate speech. Vamva, a self-described “conservative Christian”, posted blatantly homophobic comments on his Facebook page.

For example, on 19 July, Vamva’s Facebook page reposted a post criticising LGBTQIA+ people and added his own comment: “Satanism at its best. I don’t care what you say. There is a domination of spiritual darkness implicated here- makuthandazwe, this is not normal!!”

Speculation was rife on student Facebook groups that the elections may have been nullified because Arthur Vamva had won the presidential race. However, Ofei said the nullification had “nothing to do with the homophobic comments” made by Vamva.

Meanwhile, student voters this week complained that pictures had not accompanied some of the names of candidates on the voting ballot.

Section 17.2. of the election policy states that candidates’ nomination forms should have “a recent picture of the candidate, a factual pen sketch of personal achievements at the University, a manifesto of maximum 300 words, a signed list of nominations, a signed commitment to undergo the annual SRC Training, and proof that they are not on Academic Probation or have not received the maximum number of hours” [a punishment for transgressions in terms of the Constitution of the Students].

Dates for a new election process will be announced “in due course”, the Communications Division stated in its statement.

Earlier in the election process, after protests at the election ‘grazzle’ on 2 August, students called on the Independent Electoral Board (IEB) and the SRC’s Student Defence Council (SDC) to lay charges against Arthur Vamva, the candidate accused of hate speech against the LGBTQIA+ community. The IEB runs the elections, and the SDC is an elected body that falls under the SRC as a substructure for disciplinary hearings and student-related offences.

Messages of support for the LGBTQIA+ community and objections to Vamva’s candidacy flooded the UCKAR Facebook page during the SRC election season.

A student petition with over 500 signatures condemning the candidate, and calling on the IEB, SRC, and Rhodes to take action, was circulated on campus.

Student Alejandro Rubenstein commented on the UCKAR Facebook page: “Not only did he drag the university’s name into disrepute, but he made multiple blatant homophobic, racist, transphobic and misogynistic utterances.”

“The candidate’s actions have been described as disgusting, and he doesn’t even attempt to hide them. Imagine it’s 2022, and you’re in a liberal institution like Rhodes, harbouring these feelings. Your parents didn’t raise YOU right. You’re not a leader in any respect. This is scary that this is how you feel about your fellow LGBTQIA+ students,” Rubenstein wrote.

Many other students questioned the university’s silence on the matter, especially in light of its transparency, transformation, and inclusivity policies.

“I hope the university also takes you [Vamva] to task because this is unacceptable. I’m calling on the SA Students Congress (SASCO) to revoke your membership and rescind their support for you unless they feel the same way. You are not someone who should be entrusted with any leadership positions, let alone president,” Rubenstein wrote.

However, Vamva was not disqualified from the presidential race by the IEB, SRC or the university authorities. His name appeared on the ballot sheet when voting commenced on Tuesday this week.