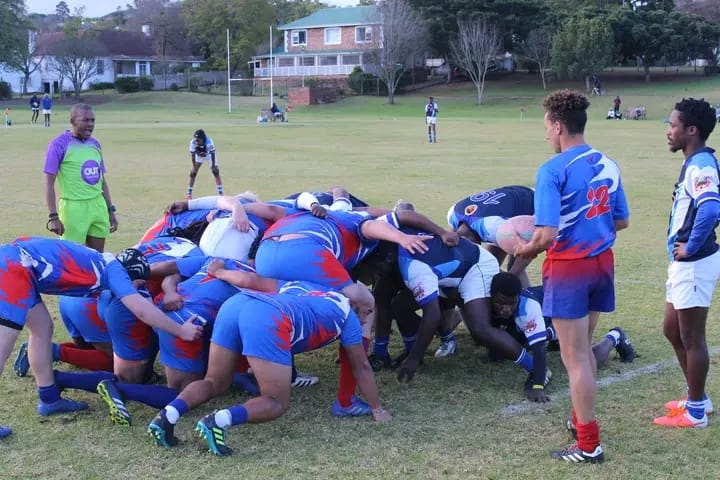 Flyhalf Mason Brooks contributed 16 points as he booted Kowie United to a 26-23 win over host Old Collegians (OC) in their second-round fixture of the EPRU SEDRU Regional League on Saturday at the Kingswood College Dold Field.

Kowie also beat OC 29-10 in the first round of the competition at the Station Hill Sports Ground in Port Alfred on 21 May 2022. The win saw Kowie replacing Klipfontein in third position on the overall log, while OC remains in fifth.

Both teams needed to adapt to the small junior field of Kingswood as the venue and couldn’t execute their game plans properly. Nevertheless, it was a great game of rugby full of running and entertainment. The game was very physical and intense as both teams came hard at each other, showing their character and keeping the ball alive.

OC’s discipline let them down at crucial stages in the game that resulted in penalties that saw the boot of Brooks come in handy, converting to points for Kowie. The visitors were very prominent at breakdowns and ensured numerous turnovers. Kowie’s discipline pulled them through in the end, which was the difference between the two sides at the end of the day. There was also no adequate room for both sides’ backlines to attack in space due to the size of the field, but they were still able to keep the ball alive and set up phases.

The home side is known for their ability to keep the ball alive and play running rugby, but their backs didn’t come to the party and made crucial handling errors on attack. Brooks kept his side in the game with brilliant tactical kicking and accurate goal kicking, while OC scored three tries on the day. Siyabulela Ngesi also missed all three of his side’s conversions which proved very costly in the context of the game.

In the end, Kowie showed tremendous composure to win the game while the discipline of OC (usually a very disciplined side) let them down this time around. Kowie stood after 80 minutes and bagged four points with their deserved 26-23 win.

Kowie’s Coaching Staff are now looking forward to their last game of the competition against Swallows at the Oval in Grahamstown on Saturday. “It will be a big game, and we look forward to it.” Said Lusandre Wessels, Assistant Coach of Kowie

OC senior player Khanyisa Solomon agreed that the game was intense as both sides showed tremendous character. “Our forwards were very dominant, and the opponents started panicking. Our strengths are to play physical as no team can match our physicality. Our backline was very scrappy and shaky as we knocked a lot of balls and lacked discipline. Our discipline needs to improve, and we must stop conceding unnecessary penalties in the danger zone, where we made crucial mistakes.”

The Grocott’s Mail/Daniels MEDIA Man of the Match went to Kowie playmaker and flyhalf Mason Brooks. Brooks was the general in his side’s backline and controlled the game brilliantly with his tactical kicking and putting his players into space. He contributed 16 points with the boot and executed a 100% kicking record on the day. He was also terrific and deceptive on attack and very unpredictable.