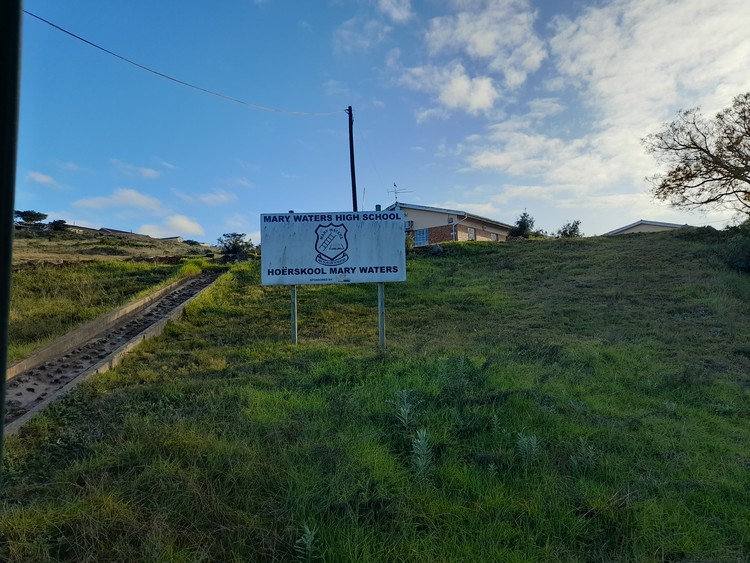 Mary Waters High School in Makhanda has been struggling with teacher shortages for years. It had to take the department to court first. The provincial education department has just missed a court deadline to pay assistant teachers at the school. Photo: Lucas Nowicki

Lawyers representing Mary Waters High School in Makhanda will soon file contempt of court papers against the Eastern Cape Department of Education for failing to comply with a court order fully.

At least two teachers at the school have been working without pay for two months and without appointment letters. They are yet to be paid for January and February. The school has also not yet appointed a curriculum advisor as ordered by the court.

However, the department told GroundUp on Tuesday that it plans to pay the teachers by the end of August.

In June, educators at Mary Waters High School, represented by the Legal Resources Centre (LRC), lodged an urgent application against the department. The school asked the court to compel officials to:

Judge Thamie Beshe of the High Court in Makhanda on 22 June ordered the department to comply with the school’s requests. Beshe ruled that the two teachers were to be employed as temporary educators until December 2022 and must get formal letters confirming this by no later than 30 June.

The department was also given 20 days from the date of the order to hire two educators.

This week, LRC attorney Cecile van Schalkwyk told GroundUp that the department has since appointed teachers in line with the court order, but “those teachers are now working, pending the finalisation of the permanent appointments”.

Van Schalkwyk said the two teachers are yet to be paid for January and February, although they have been paid since March. She said a curriculum advisor has also not been appointed.

When the department missed the court’s deadline, Van Schalkwyk said the LRC, after meeting and consulting the school governing body (SGB), sent a letter to the department to respond by 29 July, but the department did not respond.

Mary Waters High School is one of the biggest no-fee schools in the region, with 1,145 learners. The school is registered as a dual medium school: 649 children receive instruction in English and 496 in Afrikaans.

Because the school has struggled for years to hire teachers who can teach subjects in both English and Afrikaans, learners have missed about 124 periods per week due to the shortage, according to court papers.

In a founding affidavit to the court, SGB chair Godfrey Brockman said the school has struggled with insufficient educators for several years.

Brockman said the school was shut down by parents and learners for weeks in May 2021 and again in April 2022 due to teacher shortages.

“The learners most affected are in grades 8 and 9 who have on average three subjects in which they have no educator. The failure by [the department]to provide the school with enough educators constitutes a violation of the learners’ rights to education, equality, and dignity, and is not in their best interest,” he said.

He said during periods when there is no teacher to teach; learners are left alone and walk around aimlessly, causing disciplinary problems.

Brockman said teacher shortages worsened in 2019 after several teachers left the school. “We sit with overworked and stressed out teachers because some must work extra hours and not even take a lunch break.”

Brockman said many teachers started booking off sick because they couldn’t cope with the workload. He said they struggled to raise funds from parents to help pay the teachers.

Department spokesperson Mali Mtima said, “The department is preparing documents for the actual payment of January and February. We appeal to these colleagues to be patient as we wrap up the files for payments.”

He promised that the teachers would be paid by the end of August. Mtima also pledged that a curriculum advisor would be appointed but did not give a date.

This article first appeared in GroundUp.co.za

Previous ArticleCape Town to Makhanda: student to lecturer 
Next Article Bilingual education can work in South African schools: here’s how