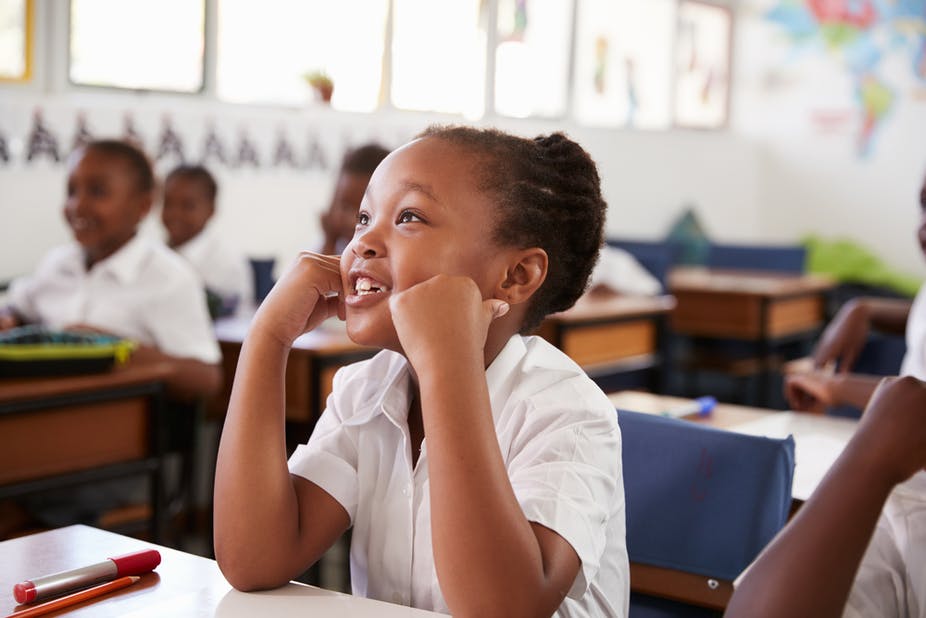 From the fourth year of schooling, the majority of South African schools teach all subjects in English only. The devastating learning consequences of this for children who speak African languages at home have been compellingly captured in the documentary film Sink or Swim. These consequences include a lack of conceptual understanding and little identification with the content.

There are 12 official languages in South Africa, including South African sign language. The constitution allows any of these languages to be used as a medium of instruction in schools. But only English, and in a minority of schools Afrikaans, is used and resourced beyond Grade 3.

Only 9% of the population speak English as a home language, and most of these speakers are white. This means that the school children who were advantaged during apartheid are still advantaged today. Therefore the Bua-Lit language and literacy collective, of which we are members, has described the language policy in action in South African schools as racist.

Basic Education Minister Angie Motshekga’s announcement in parliament on 9 March 2022 that indigenous African languages will be used as languages of instruction beyond Grade 3 is, therefore, very heartening. No implementation details have been given yet.

The department’s decision is based on a pilot project in the Eastern Cape province using mother-tongue-based bilingual education as a model. The pilot initiated the use of Sesotho and isiXhosa as languages of instruction in Grade 4 in 2012, and in 2020 the maths, physical science, and history exam papers were available in Sesotho and isiXhosa as well as English. In 2019 Grade 6 learners involved in the bilingual pilot scored on average 28 percentage points higher in natural science and technology than their English-only counterparts.

The Department of Basic Education’s announcement has had a mixed reception, with commentators debating whether African language medium of instruction can work.

But the bilingual aspect of the Department of Basic Education’s project is getting lost in the debate. And the fact that the majority of South African teachers already teach bilingually is unacknowledged. They do so illicitly, in the form of oral “code-switching” between the African language(s) used by the children and English as the official language of learning and teaching. Decades-long research into code-switching has shown it can be effective in South African classrooms.

But code-switching is not supported by bilingual materials or assessments and is often frowned upon by department officials. This is because of fears that English will be compromised as well as colonial ideas about African languages being irrelevant for use in education.

The new move by the Department of Basic Education is an opportunity to acknowledge, strengthen, and resource these bilingual practices.

Bilingual education for who?

In South Africa, bilingual education is historically associated with teaching white children. During apartheid, Afrikaans and English were the two official languages, aiming for all white South Africans to become bilingual in these languages.

Bilingual education was implemented in different ways. It was common to use one language as the medium of instruction and teach the second as a subject. There were also schools that used both Afrikaans and English as languages of instruction for different classes in the same grade.

Until now, bilingual education at scale using any of the nine official African languages and English as dual languages of instruction has not been available for children.

Schools need assistance in developing language policies that support bilingual or multilingual education. One size will most definitely not fit all schools in a richly multilingual and diverse society.

For example, in many schools in the rural Eastern Cape where isiXhosa is dominant, it is feasible to implement a bilingual model using isiXhosa and English. Bilingual teachers can teach using both languages – as they currently do unofficially – and use textbooks written in both.

A school with learners from multiple language backgrounds in a more diverse urban setting like Soweto will need a different approach making use of translanguaging. Translanguaging involves the fluid use of more than one language to communicate. For example, children can be grouped according to their dominant languages when solving a maths problem or translating a poem. Or they can work in mixed language groups to produce multilingual science definitions. The goal is to support deep learning in content subjects and increase competence in all the languages used in the classroom (including English).

A major challenge for learning in South Africa has been the lack of availability of materials in languages other than English and Afrikaans beyond Grade 3. As with classroom methodology, there is a wide range of approaches to learning materials that can support bilingual or multilingual education. For example, bilingual textbooks have been successfully developed in Rwanda.

An example of this is iSayensi Yethu (Our Science), which has been developed in English and isiXhosa. Subject-specific dictionaries can also be excellent learning resources, for example, one developed at the University of Cape Town and one developed by the Human Sciences Research Council of South Africa.

Final school-leaving exams have been available only in English and Afrikaans, except for the isiXhosa exam pilot in the Eastern Cape in 2020. Bilingual assessments in English and an African language have been trialled and proven successful in the Western Cape province and Zimbabwe. Again, a diversity of approaches is preferable.

Successful implementation depends on preparing teachers for bilingual education. The pioneering bilingual university teacher education programmes at South Africa’s University of Fort Hare and Nelson Mandela University have begun this work, which can be expanded to other universities. Practising teachers will need appropriate materials and in-service education that builds on their existing bilingual practices.

Bilingual education is possible for all of South Africa’s children. With a multi-pronged approach to implementation, as outlined here, bilingual models will contribute to decolonising the country’s schooling system.

This article first appeared in The Conversation Africa.