Speaking to us from the walls of our town 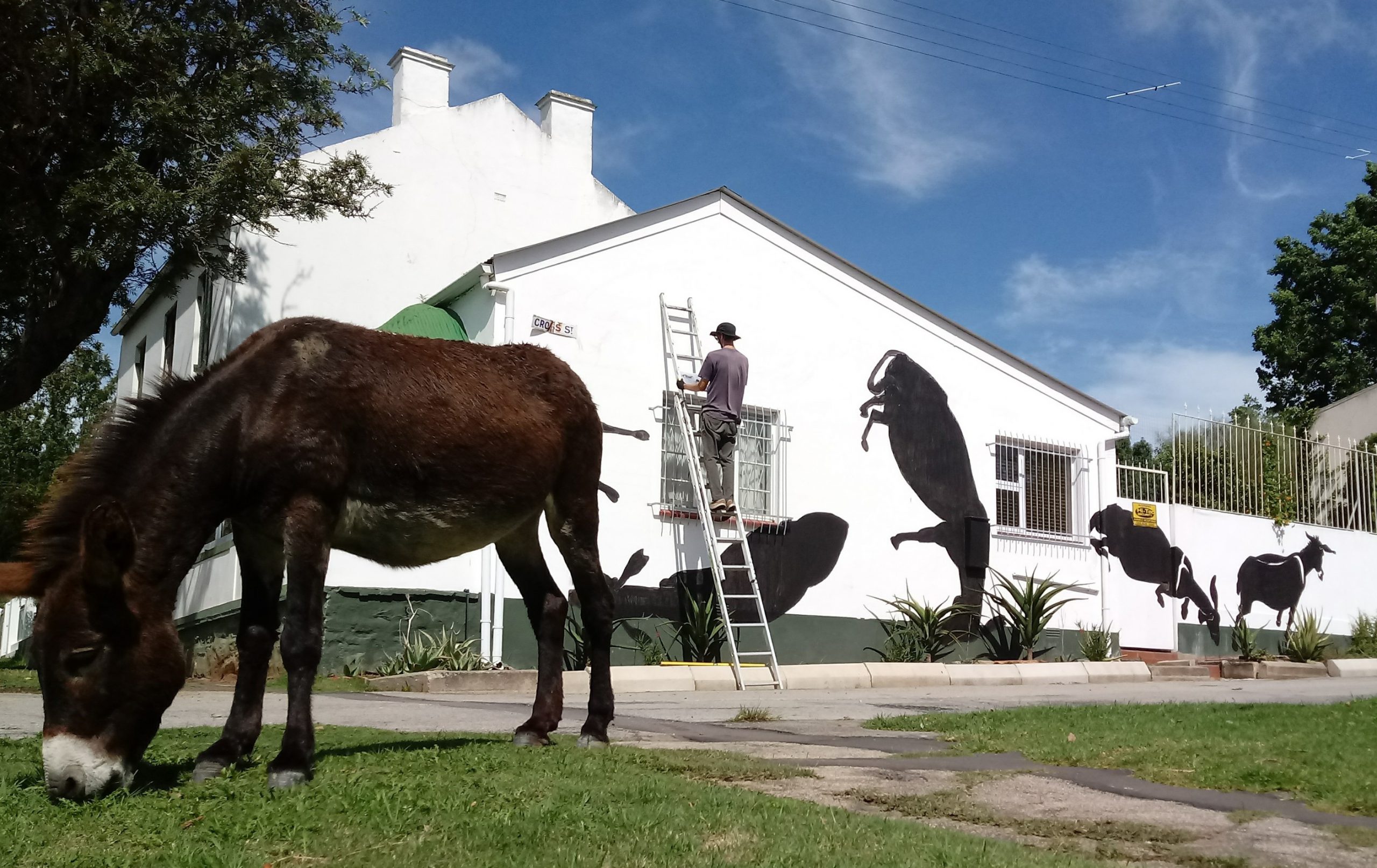 Mookie draws inspiration from the work he has been doing with his first-year art students on different angles and perspectives - and from the donkeys he observes from his window in town. Photo: Arno Cornelissen

Strange and wild turns of fate put me in the path of Mook Lion. One such turn was when a passer-by saw me admiring the street art in a Makhanda storm drain. “Mookie!” he called out. A mistaken identity.

Nevertheless, the name stuck in my head, and one night I again heard that name called out. Finally, the figure had a face. He had stopped being a fable in my mind. It’s funny how someone could mistake me, much closer to the ground, for Mook, who is a tall mellow dude – “a lanky angel” is how one of his friends describes him.

Mook radiates creativity, respectfulness, a gentle freeness, and, if prodded, can supply the deepest insights into graffiti, street art, and murals. An accessible and highly personal introduction to Mook Lion can also be found in the art he creates and shares with citizens in the public space. For instance, the larger-than-life donkeys that walk all over The Cock House on George Street are Mook’s doing.

Footnotes in the City, a documentary that Mook and his brother made about street art in Durban, demonstrates that Mook’s art comes not only from his own creative roots but from all the artists who came before. Witnessing Mook draw parallels between modern street art and ancient rock art revealed his profound bond with our creative predecessors through personal expression and adding value to our communal spaces.

Mook has been busy creating iconic murals in our town since 2020. It’s a relatively long way from Johannesburg, where he was born, and Durban, where he moved when he was four. In the 30 years since then, he has painted and pasted his way around the country and the world, leaving his creative mark from Durban to Cape Town, Berlin to Dresden, and London to Stockholm.

With a master’s degree in fine art and a lifetime of experience, Mook describes three categories of visual art in the public space.

Graffiti: In its rawest essence is concerned with celebrating and expressing “individual style and agency”. Another major factor of graffiti culture is fame and an egotistical reward when other members of the graffiti community see your work out in the streets. Its culture is “insular, almost operating in the same sphere as fine art; in the sense that it is catered for a niche community”.

Street art: Can be seen as a more “inclusive art form that tries to capture and appeal to the imagination of the broader public” while conveying the desired message. South Africa’s resource divide does make it harder or easier for some to access and use certain mediums. Yet anyone has the capabilities to create street art and change the aesthetic of a shared public space.

Murals: These are majorly distinct from graffiti and street art since they are usually done with permission and are typically commissioned work. A mural can also contain within it a specific message that attempts to communicate to community members. Murals can spring from a privileged position, where those who have the resources can alter the aesthetics of urban space.

Following these frameworks, Mook explains that “it is hard to monetise true street art.” Because of this, it can make a powerful statement against the “capitalist functioning of urban space”. Street art “operates and exists outside the capitalist system” that “subverts the notion of financial remuneration”. As it stands, “the public space is a competitive space. Generally, those with the resources control this space and its aesthetic,” Mook says. “Street art subverts that.”

My blood begins pumping as we talk about the feeling behind picking up a black marker and marking a white surface. It’s an act of complete agency and a realisation of your potential. So it’s hardly surprising that Mookie believes great benefits come from allowing young people to express themselves in the public space.

Knowledge has been passed down to Mook along his path as an artist. So, as a teacher, Mook aspires to nurture an active street art scene in Makhanda. The ways in which Makhanda celebrates the arts, along with its focus on education, leads Mook to believe that our town is ideal for fostering such a culture, where a more democratic and communal approach can be realised in the urban space, “making for a more convivial living environment”, he says.

“One can only do so much with your own hands, but if you can encourage a whole generation of people to do it, you can have a way more potent and widespread impact.”

Despite these lofty aims to spread the joy, Mook remains grounded and is grateful for his roots in graffiti culture: “It is the thing which has led me to the path I am on, and it wouldn’t make sense for me to turn my back on it now, just because I’m educated in fine art. I still value graffiti culture; I still think it’s so potent, important, and meaningful,” he says.

“Around the world, people realise how powerful and beneficial it can be to transform the repetitive public space with personal expression. If you want it bad enough, you can attain it. You have to be motivated and relentless. Be brave, be courageous and start putting your work in a public space. It’s easier than you might think.”

This part isn’t a fable. The messages and art of Mook Lion – and all the other street artists –are real. Look around you in Makhanda. Artists are speaking to us.