A laugh a day keeps the end of fest blues away 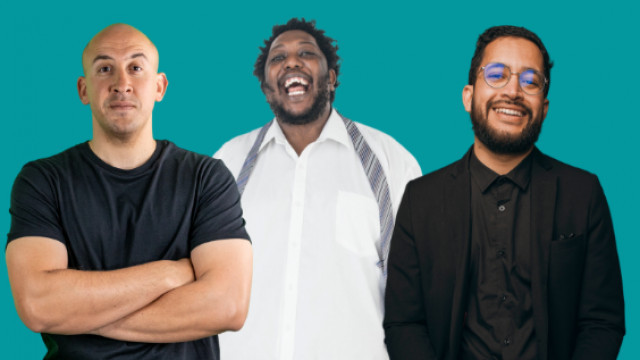 A mixed bag of chuckles and awkward silence. Some jokes hit, others miss – by a long way. Such is the world of comedy. The delivery, punchline, and energy in the room determine if the show has flavour or if it lands bland on the audience’s taste buds.

Threedom of Speech includes award-winning comedians Kagiso Mokgadi, Yaaseen Barnes, and Dalin Oliver, who are joined by guest comedians such as Jaryd Pillay, Kaashif Stellenboom, and JamJam. Each comedian brings their unique style to the stage, giving the show variation and flavour. There is a platter of jokes on offer for everyone.

The majority of the banter sticks well with the audience. Oliver is the host, introducing the other comedians while sneaking in a few of his own quips. He does a phenomenal job at keeping the audience focused and excited for the next comedian. Every comedian does their best to keep the good vibes alive, soldiering on when jokes flop and flounder only to promptly resurrect the audience with some hilarious one-liners.

The comedians are impressively intuitive. They read the room, changing their jokes to meet the audience’s energy. Relatable punchlines yield a good string of laughter, while those more obscure fly over our heads and we are left staring at the comedian in awkward, painful silence, hoping we will soon be relieved by the next wisecrack. The comedians get us involved, sometimes making jokes at our expense and, boy, does it go down well – don’t take it personally, people; it’s comedy, after all.

You can’t please everyone at the end of the day, but Threedom of Speech promises a good laugh.

Previous ArticleNothing happens, nobody comes, nobody goes
Next Article The spirit of Africa in indigenous African instruments