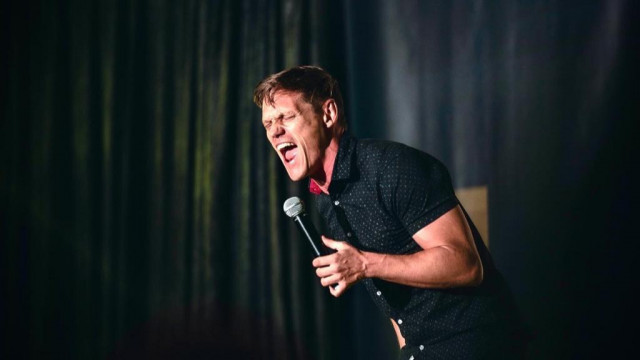 After swearing that 2019 was his last show, Rob van Vuuren is back at the National Arts Festival following what seemed like a rather tumultuous lockdown period. Divorce, Covid, near-death experiences, and he is Still Standing.

Loadshedding forced a change of venues a few hours before the show, which caused a bit of a wait while NAF staff worked to get another venue ready. As 9 pm approached, the cold weather seemed to get to a few members of the crowd. Let me tell you; it was well worth the wait.

In typical van Vuuren fashion, he started the show heckling audience members and running through some safety protocols (checking there were no Will Smith fans in the crowd). The show is centred around the aftermath of the “apocalypse” and what is framed as some of the most brutal years of Van Vuuren’s life. He creates a hilarious picture of South African life during the pandemic, covering pretty much everything from Separation and harrowing Ayahuasca experiences to crime and home affairs.

Van Vuuren proved, once again, his comedic brilliance in this brutally astute and brilliantly executed set. Especially in his moments of improvised, sharp-witted retort when chatty audience members pipe up.

Van Vuuren seemed elated to be back on stage. He explained in-depth how ‘kak’ online comedy was when his only audience member was his knitting mom, who “didn’t laugh once” at his jokes.

The energy van Vuuren brought to his live audience was tangible, creating an hour of dearly missed interactive comedy. What elevates Van Vuuren’s show is his masterful use of physical theatre. His mocking expressions and animated gestures make for one immensely entertaining watch.

Van Vuuren claims he is something of a demotivational speaker who has figured out that the meaning of life is “not a very hopeful message”. However, he left the audience with an uplifting sentiment. Despite everything, we are still standing and, thanks to Rob, still laughing.