To dance or not to dance? 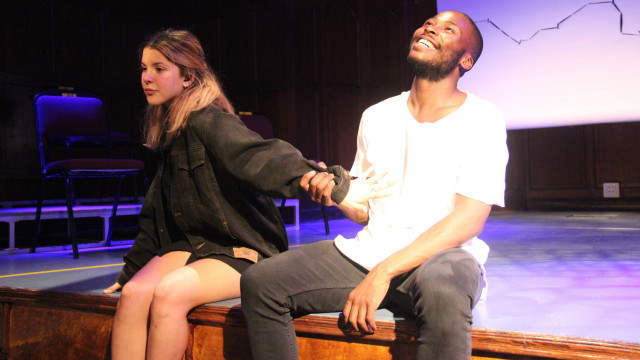 A scene from 'May I Have This Dance?'.

DANCE-THEATRE: May I have this dance?
Review by DANA OSBORN

A man and a woman, almost strangers, begin a conversation. “Star Wars or Star Trek,” the man asks. “Star Trek,” she answers. “No, No, NO! Star Wars is the best space movie of all time.”

This may seem like a rather futile disagreement, but what about an argument on the validity of marriage? How about a dispute on having children or religious beliefs? What if two people had completely different backgrounds, divergent interests, varying levels of privilege and clashing priorities? Can a couple succeed if they fundamentally disagree on life? This is one of the questions that May I Have This Dance? explores.

In this two-hander dance drama, a young millennial couple navigates the complexities of their relationship at different points in their lives – meeting, dating, sex, marriage, pregnancy and the death of a loved one. These milestones, and the disagreements they engender, form the play’s narrative structure. At each point, the characters face a choice, creating a branching narrative in which one decision can change everything. May I Have This Dance? asks us: Would you choose the same route if you knew then what you know now?

Despite the odd cringe-inducing moment and the occasional use of clichéd tropes such as a train station as the site of a life-altering decision, this play is thought-provoking, funny, and intelligent. The choreography is dynamic and beautifully executed, despite a few clumsy transitions from dialogue to dance. I especially enjoyed the simplistic set consisting of just three props. Books, benches and a jacket symbolise the emotional proximity of the couple throughout the narrative.

Part theatre, part dance – the production successfully gives equal storytelling weight to movement and dialogue. The dance sections form much less than half of the run-time, but the emotional significance they embody makes them equal contributors to the overall narrative.

All-in-all, this production is an enjoyable watch with an interesting conclusion. The most poignant aspect of this piece is its response to the question Margaret of Navarre once asked: “Is it better for a man to speak or die?” Nothing is permanent, especially something as fragile as love. So, in the face of inevitable pain, whether from failure or regret, what will be your choice?

May I Have This Dance? is playing until the 2 July.

Previous ArticleWhat does it take to survive?
Next Article Confessions of a part-time coconut